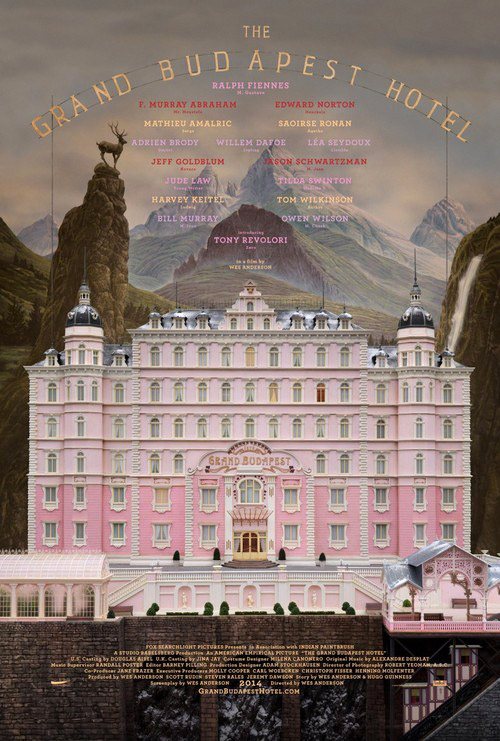 The Grand Budapest Hotel is the latest film by Wes Anderson. As quirky as ever, this film possibly contains his most stunning visuals yet and that is saying a lot coming after previous works like ‘The Life Aquatic’. This movie has a very large cast but centers around Ralph Fiennes’ M. Gustave, a famous concierge of the namesake hotel and his lobby boy played by Tony Revolori.

What really sets this movie apart from his previous films for me is the amazing performance form Ralph Fiennes. It brings a sense of urgency, realism and intensity rarely seen in Anderson’s previous films. Tony Revolori as the lobby boy fits perfectly into the Wes Anderson paradigm of comatose character humor. Think Pedro from ‘Napoleon Dynamite’ or most characters from any Anderson movie ever to varying degrees. Jason Schwartzman brings the comatose apathy as well in a very small role but the rest of the cast is a little more lively this time around.

Adrian Brody is angry, borderline psychotic but Willem Dafoe has the most fun in an extremely entertaining supporting role that is menacing villain who is at the same time hilarious. Jude Law and F Murray Abraham bookend the film as the story of the past is reflected upon in a more recent past. The story is told in a very effective structure of chapters and is substantial enough that it actually feels longer than its 99 minutes in a good way.

This film has the same whimsical humor as other Anderson films but with a better story with more of a driving force. The set design is ridiculously amazing and will surely be nominated come Oscar time and should probably win. Hopefully Ralph Fiennes will be nominated for his performance as well but it is way too far out to speculate on that at this point.

Another visual effect employed by Anderson is his choices of aspect ratio. In an extremely stylized visual move, the 1968 scenes are shot in a wide panoramic 2.35:1 ratio, the 1932 scenes are shot in a very boxy 1.37:1 ratio, the same as 1930s movies such as ‘The Wizard of OZ’ and ‘King Kong’ and a similar shape to older television sets and finally the present day scenes are shot in a 1.85:1 ratio similar to the 16:9 ratio of HDTV. It is very effective in giving the different periods different feels, but the 1968 widescreen feels far superior to the other 2.

This is a visually breathtaking, quirky and never boring movie.