Since Record Store Day is this Saturday, we picked this New Jersey First to feature today. 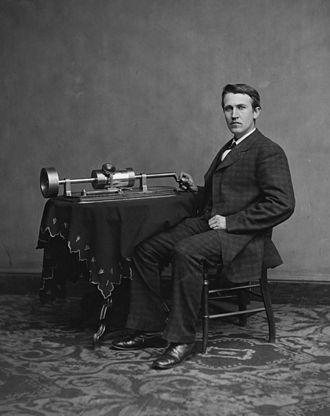 The first phonograph was made by Thomas A. Edison in Menlo Park in 1877. While other inventors had produced devices that could record sounds, Edison’s phonograph was the first to be able to reproduce the recorded sound. His phonograph originally recorded sound onto a tinfoil sheet phonograph cylinder, and could both record and reproduce sounds.  The tinfoil sheet was wrapped around a grooved cylinder, and the sound was recorded as indentations into the foil. Edison’s early patents show that he also considered the idea that sound could be recorded as a spiral onto a disc, but Edison concentrated his efforts on cylinders, since the groove on the outside of a rotating cylinder provides a constant velocity to the stylus in the groove, which Edison considered more “scientifically correct.”

Edison conceived the principle of recording and reproducing sound between May and July 1877 as a byproduct of his efforts to “play back” recorded telegraph messages and to automate speech sounds for transmission by telephone. He announced his invention of the first phonograph, a device for recording and replaying sound, on November 21, 1877 (early reports appear in Scientific American and several newspapers in the beginning of November, and an even earlier announcement of Edison working on a ‘talking-machine’ can be found in the Chicago Daily Tribune on May 9), and he demonstrated the device for the first time on November 29 (it was patented on February 19, 1878 as US Patent 200,521).