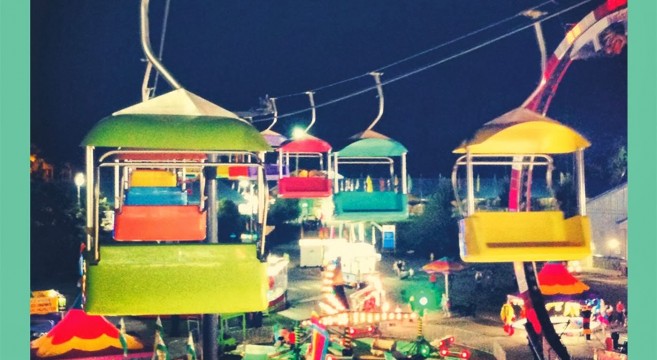 I always love when a new record comes out and it makes me, at least for a little while, not want to listen to anything else. At home while working on the site, in the car at top volume, at work in my tiny cubicle. With their latest release Teenage Graceland, the New Brunswick band brick mower did just that. Released March 25th on Don Giovanni Records, this is the perfect upbeat record to kick off the Spring season as we leave Winter in the dust.

brick mower describe themselves as “NJ living room punk rock” and Teenage Graceland is a great indie punk record. “Georgia Glass” kicks off the album and is a great straight ahead rocker with fantastic guitar work by guitarist/singer Eric Truchan and Steve Gennarelli’s pounding drums. The first single “Shitty Parade” follows and is an brilliant uptempo, pop punk song with a sing along chorus. “Ketamine Smiles” is quite melodic with a killer bassline from Kitsin Gogan propelling the song forward. Eric employs different vocal styles here to great effect as well. You cannot listen to”Sugar Teeth” and keep still. You will want to get up and move. It clips along at a fast pace and doesn’t let up until the last note. This song has single written all over it.

Along with slower songs such as Sad Houses and Starve For The Weekend this is the sound of a band maturing and expanding their range. The core is still there, though—smartly made punk rock. 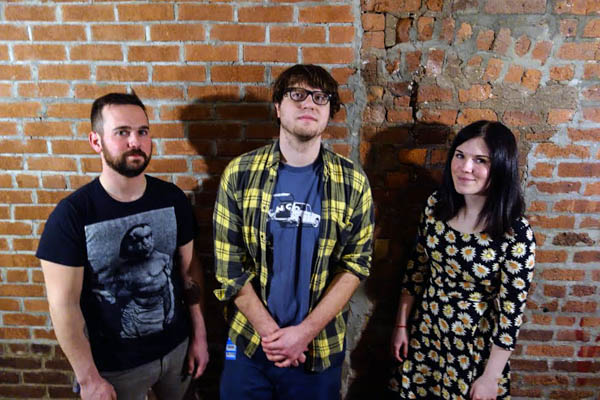 brick mower has been perfecting their lo-fi punk sound since they formed back in 2009. They released various singles and EPs until they signed with Don Giovanni and released 2012’s My Hateable Face. They have been steadily building their audience behind lots of touring all over the US. We cannot wait to check them out live.

Eric and Kitsin answered a few questions for us about their start, recording process, and, of course, baseball:

Tell us a little about how you guys met and decided to start a band?

Kitsin and I met when we were in college and had another band (more of a recording 4-track project) that ended in 2008. We kind of started to lose our minds not being involved in a band anymore, and in 2009 we decided to record a few songs, which wound up being our first EP, floors.

How did you come up with Brick Mower?

Kitsin and I really wanted to call the band “Mower” but we found a band on the west coast that had a real mall metal look to them. Which, believe it or not, was not exactly what we were going for. We were tossing around ideas and she suggested putting the word “brick” in front of mower. Mainly because it was kind of ridiculous. It’s that simple, but we have a bunch of dumb stories we’ve made up to coincide with our name… All of which I will spare you at the moment.

New Brunswick has a long history as a dynamic, thriving music scene. What is it like being a part of that community?

Being able to come up playing as this band in New Brunswick, and continuing to do is a really fortunate thing. We’ve had the chance to play with a ton of cool bands local, and touring through New Brunswick, since our beginning. When we first started brick mower, the idea of playing NB basement shows on a regular basis seemed tough, so the fact that our very first show was actually a New Brunswick basement show was pretty cool. We also met some awesome New Brunswick people that are in our lives now because of this band.

Who are some of your influences? Who would we be surprised to find in your record collection?

Oh boy, this question is always a tough one because there’s just so much, and not just music. I’m a big film fanatic, but don’t talk about it much, and haven’t been as crazy with film in recent years. But surprises?…. I am a huge fan of The Fall, and proudly own and listen to all of their studio albums! But there’s little Fall influence in our material. Also K and I love Big Black in unhealthy amounts and there is no evidence in our music at all. It may surprise some or none to find Adele’s body of work in our record collection as well. Love that gal.

Tell us a little about your recording process. Do you have a good idea of what you want the songs to sound like or do you come into the studio with general ideas and improvise?

As far as our recording process is concerned, we have a pretty solid idea of what we want going in, but after we hear the song in it’s entirety we definitely get a lot of on the spot ideas going. It’s easier to envision it when you have the actual song recorded and in front of you. You start to get ideas that never occurred before, even if they are minor ones. We record everything live for all of our albums. As the records have progressed, and we’ve spent a little more than a day working on it, we’ve added a few things here and there. I personally don’t like to spend too much time on a song, because then I start getting pretty bored with it. But sometimes a finishing touch or two is necessary.

Pitchfork reviewed the first single off Teenage Graceland, “Shitty Parade.” That must have been pretty cool when you saw that?

Yeah, it’s pretty cool in the fact that, if anything, that helped a few more people see the band, or hear our track that might not have ever heard of us. I don’t put too much stock in it, but it’s cool to get some press that wasn’t scathing. Also being compared to Dicky Barrett is not something that happens every day.

Are you anxious to get out on the road in support of the new album?

Yes. Oh man, that’s an understatement. It’s been a few months since we did our last tour, which is just painful! I hate the waiting around for it to start, I can’t wait to start touring again, or at least to be in a solid position to book and plan a tour.

We saw the “At Home With Brick Mower” video so this is a two-part question. Are you excited for baseball season and how is the cat training going?

Couldn’t be more excited for baseball season! The Mets just lost their season opener…. ugggh. And it’s gonna be a bummer season for sure, but whatever. You don’t become a Mets fan for the wins. But man I’m still excited.  As far as the cat training, sadly they remain untrained and incredibly rowdy.

You can pick up Teenage Graceland on iTunes here and on Amazon here.