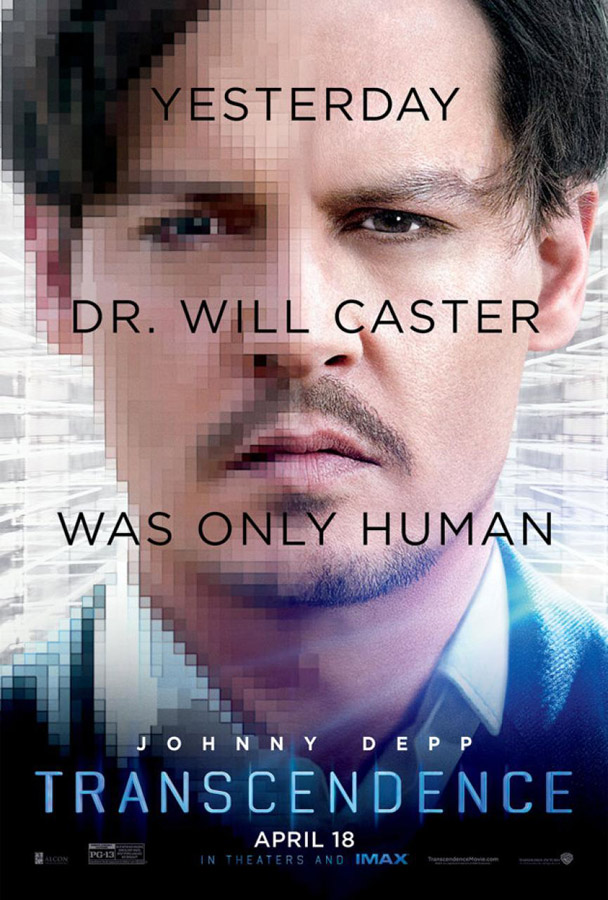 Transcendence is the type of movie that bad reviews won’t stop me from seeing even if I think they may be right. If the commercials look interesting, the subject matter is intriguing and I like the actors and or director involved I will see the movie no matter what. There is a certain amount of curiosity and elements that I expect to like no matter what.

In Transcendence, Johnny Depp plays a brilliant scientist who, when he finds out he is dying agrees to have his mind digitally copied into a computer to basically create a virtual version of himself. I know that sounds ridiculous and it kind of is. I could see from a mile away that it was going to be one of those films where hollywood tackles technology that it doesn’t really understand, but the film did impress me by getting smarter and picking up steam in the second half.

While the movie is kind of a mess and does seem flat and slow at some points a lot of credit has to be given to Rebecca Hall for infusing the film with heart and intensity. She brings real emotion and shows a conviction that she is invested in the story even if the audience isn’t. Another positive is the cinematography. The movie was directed by Wally Pfister, the cinematographer from ‘The Dark Knight Rises’. This movie offers some truly amazing visuals and at the theatre where I saw it I could tell that it was being shown in a true super wide 2.35:1 aspect ratio which is stunning.

Johnny Depp plays the role the way it probably should be played but that doesn’t make for the most entertaining character. He starts out giving speeches about technology where he shows his character’s sense of wonder and curiosity but then realistically loses all energy and personality when he finds out he is dying. As the virtual version of himself, he is a combination of relaxed, charming and creepy and there is the mystery of what exactly he is. The movie’s flaws are that it is a mixture of slow, underperforming and contrived but it does have the positive qualities as I have mentioned above.