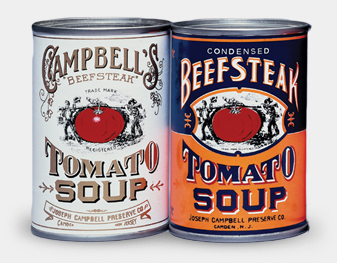 The first condensed soup in America was cooked and canned in Camden County in 1897. That company was Campbell’s, of course.

The company was started in 1869 by Joseph A. Campbell, a fruit merchant from Bridgeton, and Abraham Anderson, an icebox manufacturer. They produced canned tomatoes, vegetables, jellies, soups, condiments, and minced meats. In 1876, Anderson left the partnership and the company became the “Joseph A. Campbell Preserve Company.” Campbell reorganized into “Joseph Campbell & Co.” in 1896. In 1897, John T. Dorrance, a nephew of the general manager Arthur Dorrance, began working for the company. It was John Dorrance, a chemist with degrees from MIT and Göttingen University, Germany, who developed a commercially viable method for condensing soup by halving the quantity of its heaviest ingredient: water. He went on to become president of the company from 1914 to 1930, eventually buying out the Campbell family.

In 1898, Herberton Williams, a Campbell’s executive, convinced the company to adopt a carnelian red and bright white color scheme, because he was taken by the crisp carnelian red color of the Cornell University football team’s uniforms. To this day, the layout of the can, with its red and white design and the metallic gold medal seal from the 1900 Paris Exhibition, has changed very little, with the exception of the French phrase on the top of the gold seal that said “Exposition-Universelle-Internationale” which was changed to the English name of the exhibition as “Paris International Exposition.”

Pin It
Previous post:
Paterson Historic Preservation Commission’s Industrial Landscape Tour Next Post:
Things to do in Jersey – May 9 10 11 2014