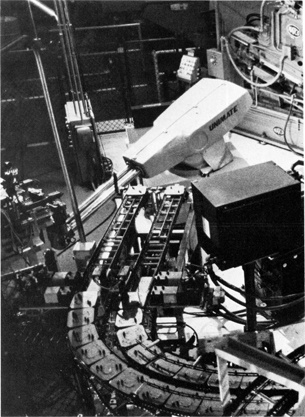 Unimate was the first robot to replace a human worker was used by General Motors in Ewing Township in 1961.

The Inland Fisher Guide Plant was a General Motors facility located in the West Trenton section of Ewing Township that opened in 1938 as one of its most modern plants and was operated by the firm for 60 years. It was initially part of the Ternstedt division of GM’s Fisher Body unit and was used to construct auto parts such as body moldings, door handles and other interior components. During World War II, the facility was converted to build torpedo bombers for the United States Navy as part of GM’s Eastern Aircraft. In 1961, the plant was the site of the first industrial robot used in the United States.

In 1961, the facility became the first commercial user in the United States to use a programmable industrial robot to replace human workers, installing the 4,000 pounds (1,800 kg) Unimate automated hydraulic arm developed by George Devol and Joseph Engelberger to position into cooling pools units of aluminum door handles and other automotive components weighing as much as 40 pounds (18 kg) that had just been die cast from molten metal, eliminating the risks to employees of handling extremely hot metal pieces and taking over on a permanent basis a task that had previously been performed by three shifts of employees. The first production Unimate was donated to the Smithsonian Institution in 1971 after being used for 100,000 hours during its 10 years of continuous operation at the Ewing plant.

At the time of its closure in 1998, the plant made auto components for Delphi Automotive. The buildings on the site were demolished and by 2011 funding had been received by Ewing Township from the federal government to remediate contamination on the site in anticipation of plans to redevelop the area for commercial purposes.