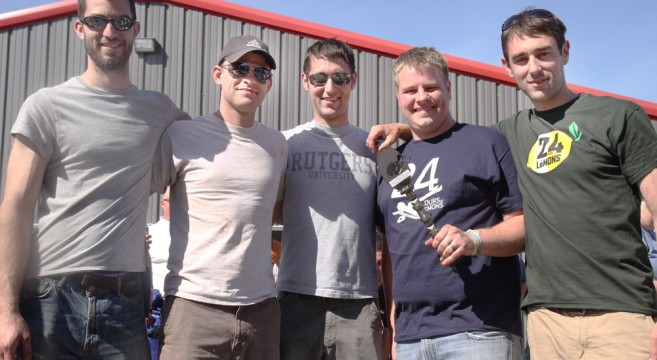 Last weekend I followed RotoMotoSportNJ through the May 2014 running of ’24 Hours of LeMons’ – a racing event where no team may spend more than $500 on their car except for safety measures. Here is my video documentary of what happened from beginning to end:

On May 9th, 2014 I found myself up much earlier than usual driving to Frenchtown, NJ to cover RotoMotoSport on their May 2014 24 Hours of LeMons race. As I approached my destination I turned down an unpaved gravel road that was slightly foggy and had wall to wall trees. My first thought was “This road is awesome! I have to get some pictures of this.” Then I started thinking that maybe I had made a wrong turn and kept trying to figure out if the road was wide enough to turn around on. Luckily, just before turning around, I saw a mailbox with the number 66 on it and I knew I was in the right place. 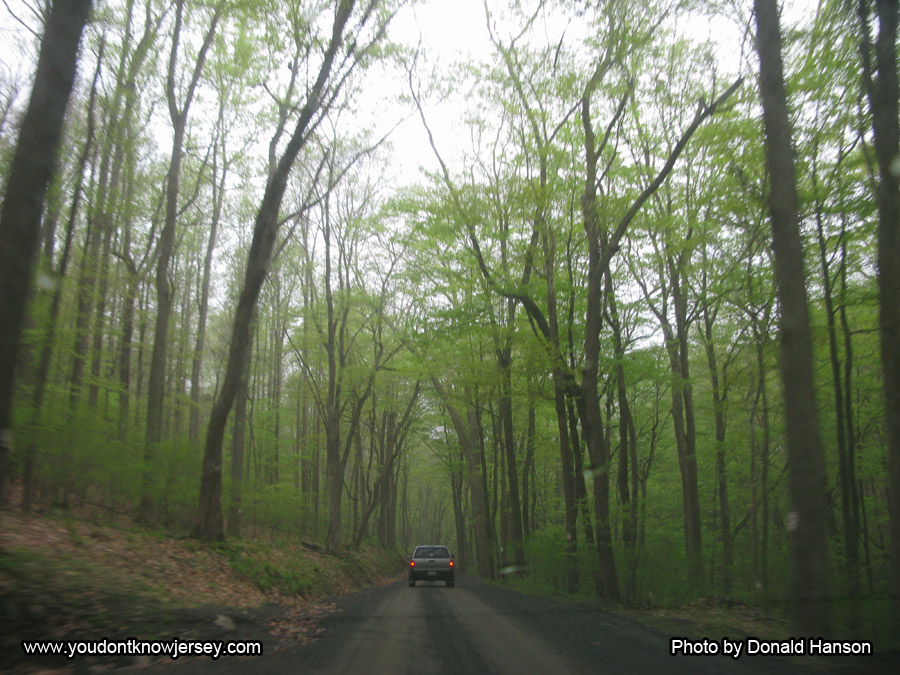 I arrived and met 3 members of the team. As I was taking pictures of the car, it looked very familiar. I began racking my brain and it came to me : “Is this a Merkur?” I said. “Good eye!” said the team captain. That’s a car that I haven’t seen or heard about in a very long time. I remember the car well because a friend of mine had been a big fan. I asked team captain Dante a few questions about the 500 dollar limit on spending for the race. The rules state that the people in charge of ’24 Hours of LeMons’ are allowed to purchase your car for $499. He said that it’s to make sure no one spends too much money and it was enforced once but as far as he knew, they never actually picked up the car. I was also wondering about the top speed they have reached on the track and he responded “101” which made me realize that even though these were old cheap cars, they got up to serious speeds. 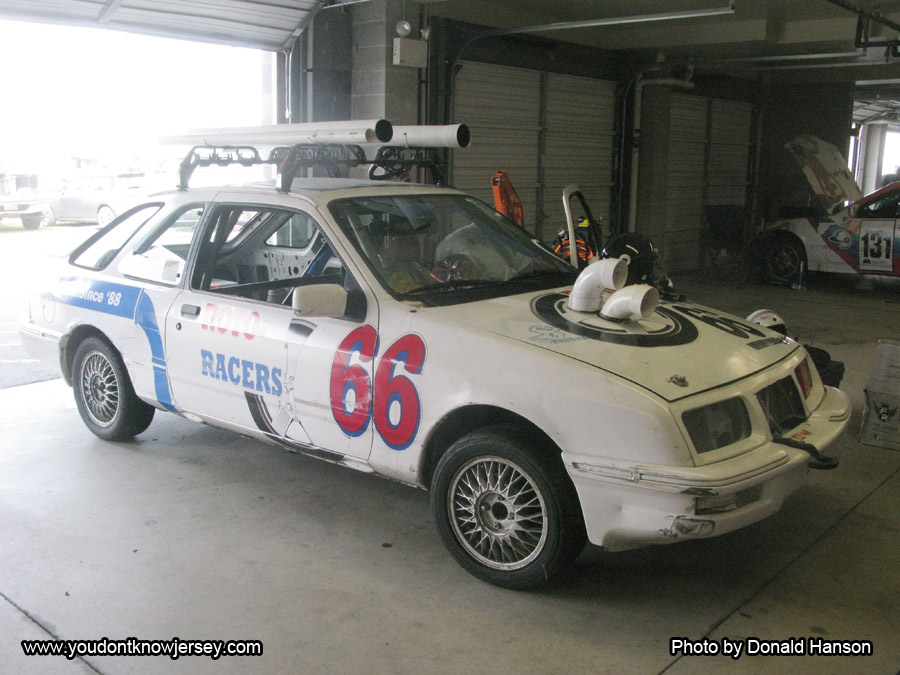 I followed them from Frecnhtown to Millville, driving through some of my favorite areas of New Jersey along the Deleware river. After having breakfast, we arrived at the New Jersey Motorsports Park. When they pulled the car into the garage I finally got a good look at the inside of the car and as you might expect, it is gutted with no creature comforts of any kind left. I was still a little surprised as you basically can see the metal of the frame all around you. I had a chance to get in and sit in the drivers seat. The lateral support was great and it feels very secure. It’s actually pretty comfortable. 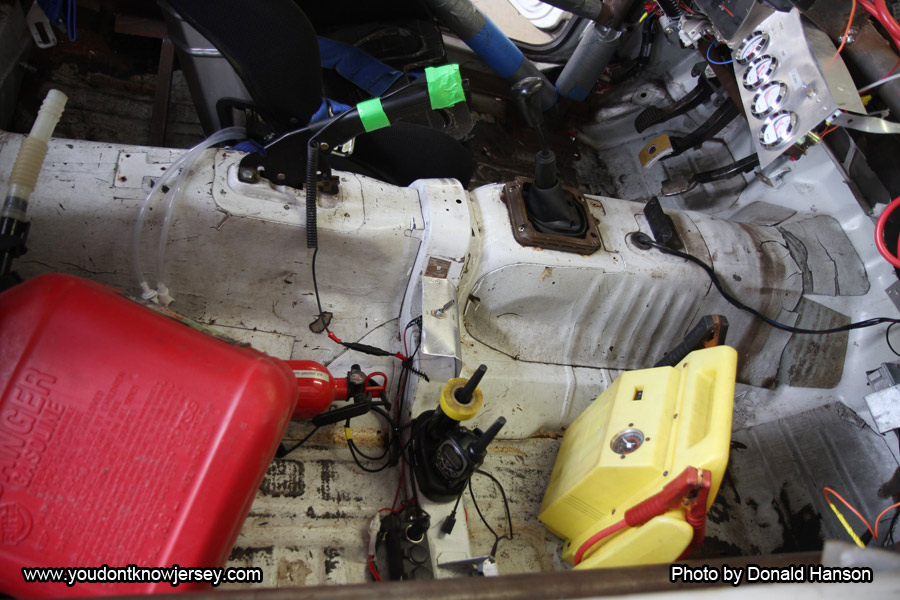 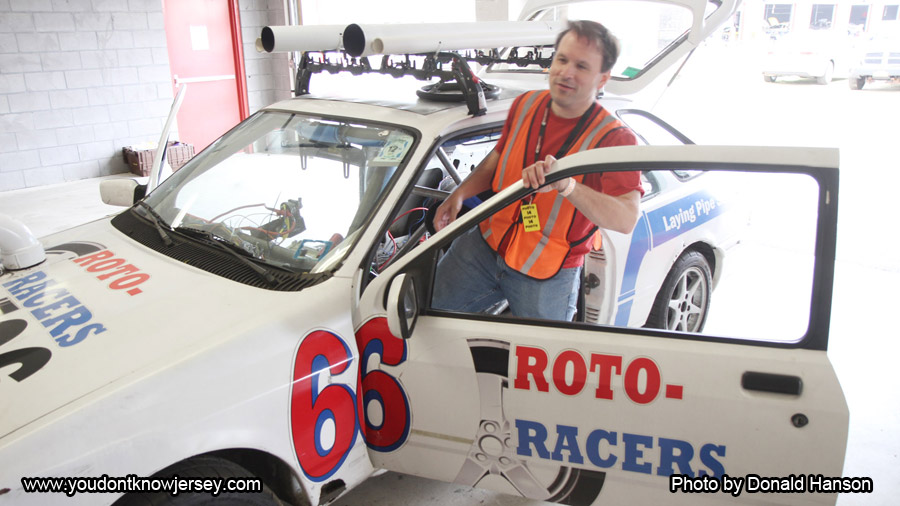 The first tech inspection was for safety and mechanics and it was about what I expected to make sure that the cars were not going to put their owners or other drivers at risk. The second inspection was much more challenging. The 2 guys in charge were ready to give you a hard time and you had to be very creative, on your toes and prepared with multiple bribes. Alcohol seems to be the most common bribe but the other ones should be creative like RotoMotoSportNJ’s framed portrait of NJ Governor Chris Christie. It’s definitely a fun challenge and you better be prepared to think on your feet and deliver a bribe that will make the judges happy! 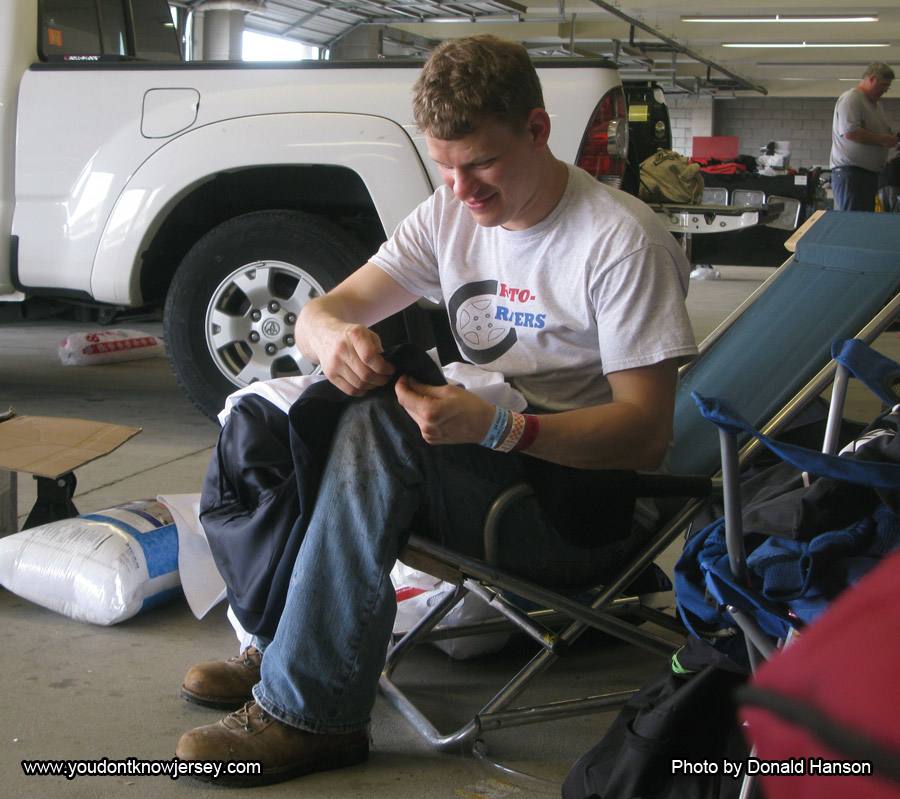 After some preparation, it was time to get on the track. I got some video of the car making a few runs. Then after a gas run, a suit jacket appeared. It was to be stuffed as a Christie fat suit and used for the penalty bribe. I couldn’t believe that they actually bought the jacket and I was truly amazed at how they were sewing the liner and filling it. These guys are really resourceful and know how to improvise on the spot. In the end, the Christie fat suit turned out great! 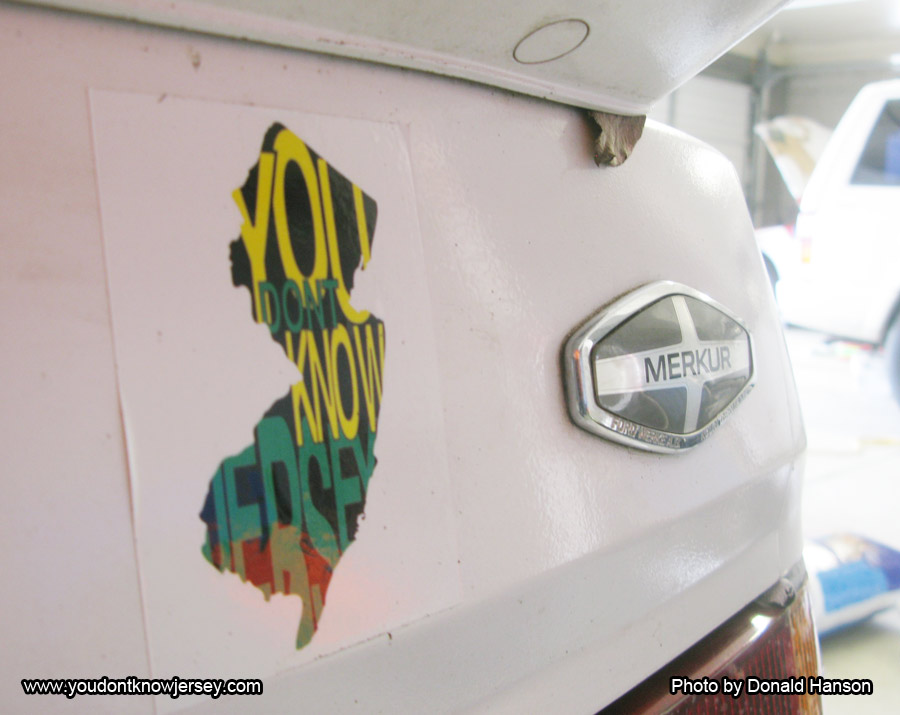 The next thing I knew, the car came back to the garage by tow truck. I knew it was a bad sign when, upon attempting to start the car, smoke came out of the engine. It felt like one of those reality shows where total disaster strikes and there is no possible way that the people are going to succeed. Of course on those reality shows the problem is exaggerated and the show always end with success. The catastrophe adds suspense to the show. That wasn’t the kind of feeling I was getting here. This felt like it was actually bad and was going to be a very difficult problem to overcome. When I left on Friday they were in the process of removing the engine from the car and things looked pretty grim. I wasn’t sure what to expect the next day. 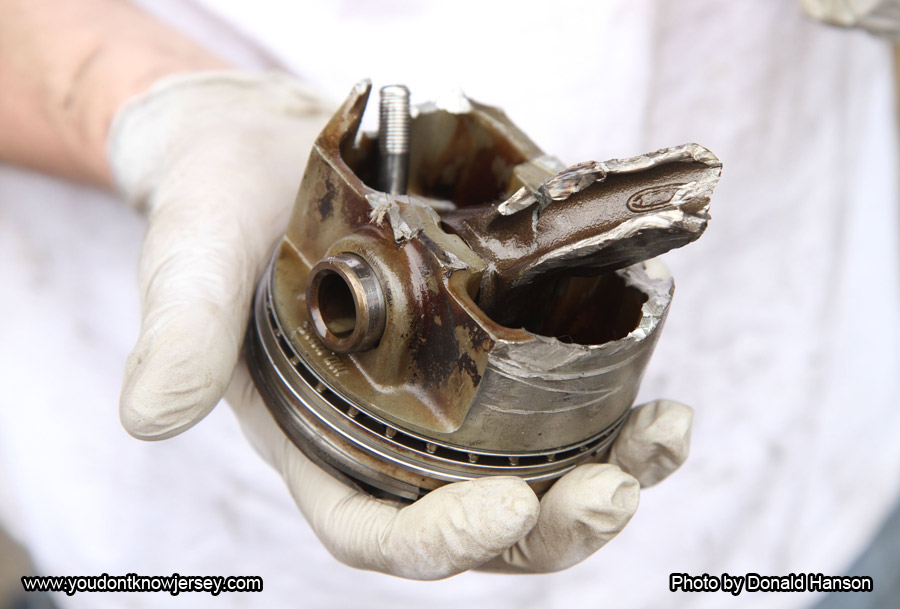 On Saturday, they had identified the problem and were working on fixing it. It still didn’t look good but at least the problem was identified and a solution was being worked on. Finally by the afternoon they were ready to get in the race and the car ran successfully until the end of racing on Saturday at 6:00 pm. It was nice to see the ovation from the crowd recognizing their accomplishment of returning to the race. 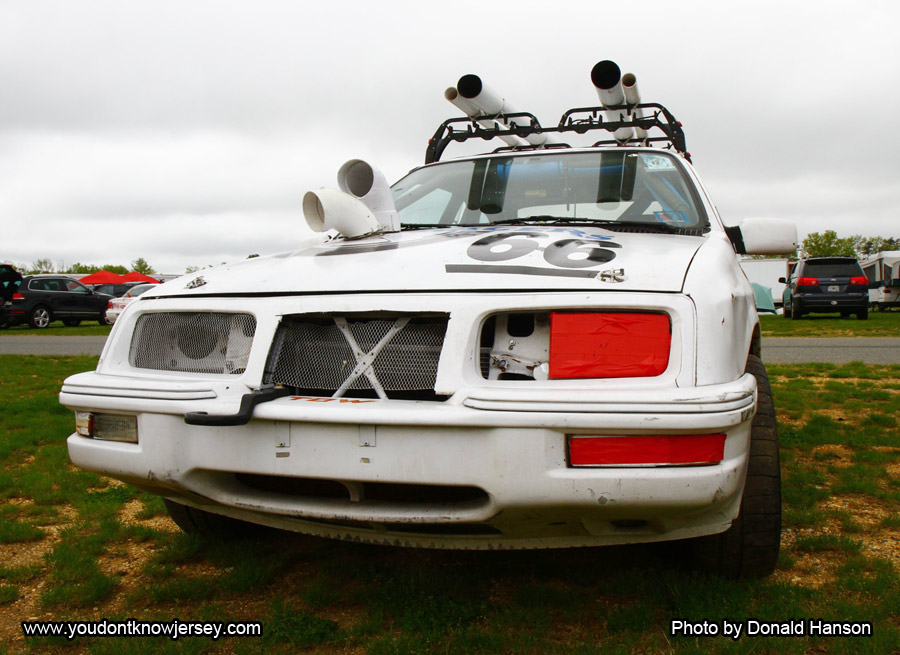 Sunday morning everything was humming along great. This time I wore pants so I managed to get into the hot pit. The team waves in the driver so they can see what spot to pull into and then jumps into action changing anything that needs to be changed and performing any necessary routine maintenance. After repairing the exhaust pipe later however, the engine blew again and that was the end of the race for RotoMotoSportNJ.

I met up with the team later and their spirits weren’t too high. They had a tragedy, made an amazing comeback and then suffered a race ending setback. They knew that they wouldn’t win any awards for their performance and they didn’t have the worst luck either so ‘Heroic Comeback’ and ‘We Got Screwed’ awards were unlikely. I was confident after seeing the wide range of awards that they could still win something! I told them that I was sure they were still in the running after everything that had happened. 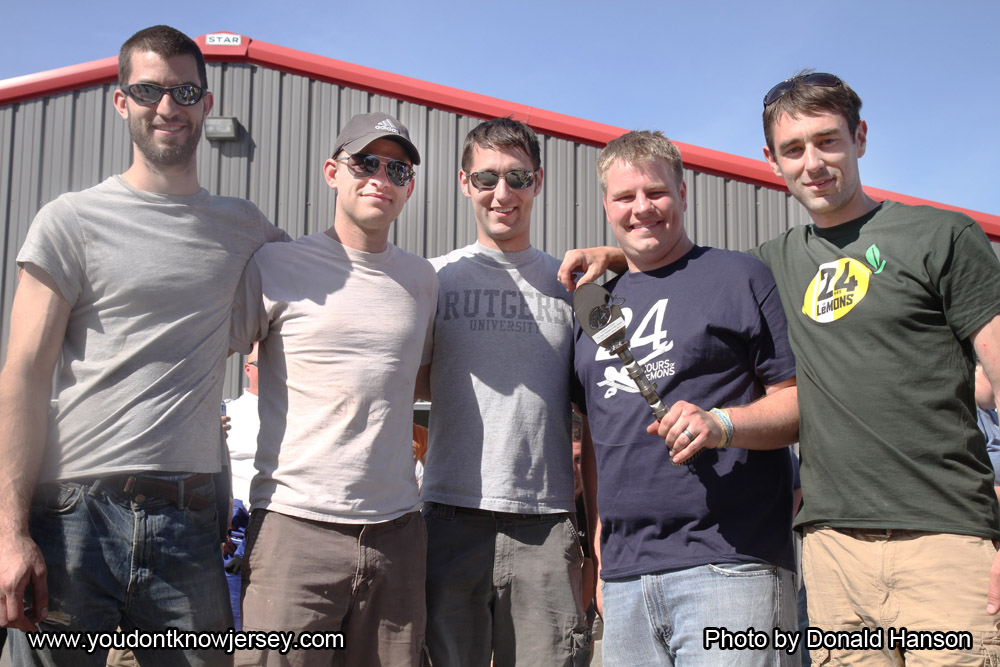 The awards began with the cars that were the most successful in making laps and then went on to the more creative ones. The announcer Phil would start telling a story for each award and most started with a blown engine or something so we had to listen carefully until the part of the story that diverged from our experience. When I heard the words “they gave be a bribe that was a beautiful framed portrait” I knew they had won! I didn’t even need to hear the word Christie. They won the Judges Choice Award. It was a great ending to a roller coaster of a weekend!