Fittingly, during the NBA Playoffs, we’re bringing you news that the first professional basketball game was played right here in New Jersey!

The first professional basketball game was played in Trenton in 1896. There’s a historical marker placed at the site of the game at the intersection of North Warren Street and West State Street in Trenton.

This is a picture of the building that stood at that intersection in 1896. The building was demolished in 1916 to make way for a new bank building. 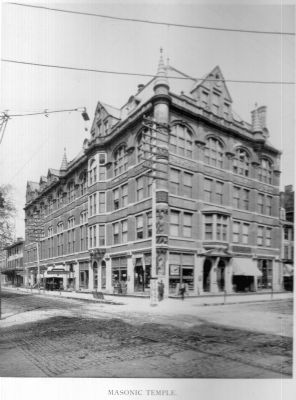 According to the historical marker, Fred Cooper, captain of the Trentons, had arranged for the rental of this Masonic Temple Hall on November 7, 1896. The Trentons defeated a Brooklyn YMCA team, 16 to 1. The game was held in the third floor social hall which had been converted to a basketball court just for this game. An admission fee was charged—25 cents for a seat on the newly-built bleachers and 15 cents for standing room—for the first time in basketball’s history.

After he paid the rent on the building, Cooper distributed the ticket money to the players who each got $15.  Cooper took $16 as the captain of the team.  The Trentons were also the first champions of the first professional basketball league, the National Basketball League, winning the championship in the first season, 1898–1899, and repeating their victory the following season.