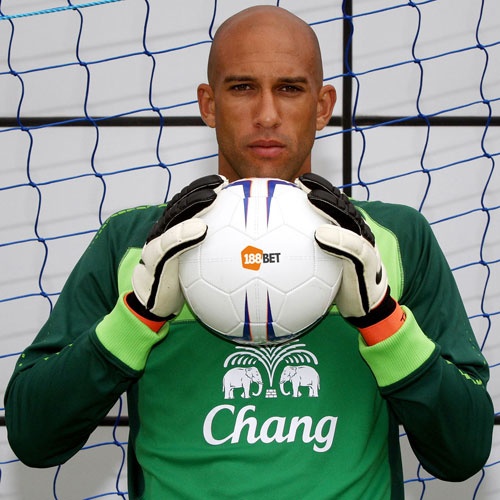 Need a reason to get into the World Cup?  How about rooting for a New Jersey kid?

Tim Howard was born on March 6, 1979 in North Brunswick.  He currently plays for the Everton club in England.

Tim was born to Matthew and Esther Howard. His parents divorced when he was three years old. Tim and his brother, Chris, lived with their mother but his dad maintained a presence in his life. Mr. Howard was determined to get Tim and Chris involved in sports. Before the two could walk, he bought them equipment for various sports to see which games they preferred. Tim showed a preference for basketball and soccer.

Howard was diagnosed with Tourette Syndrome, a neurological disorder characterized by rapid and involuntary tics and vocalizations, when he was in the sixth grade. In 2001, Tim was named to the Board of Directors of the Tourette Syndrome Association of New Jersey.

Before Howard was even a teenager, Tim Mulqueen, a one time assistant coach for the United States men’s national under-17 soccer team, saw his potential at a soccer camp Howard attended and took the boy under his wing. In high school, Howard proved a star not only in soccer as a midfielder, but also on the basketball court, where he averaged 15 points per game and helped bring his team to the state finals in his senior year. However his talent and abilities as a soccer player were far more impressive. Despite his position on his high school team, Howard was a far better goalkeeper than he was a midfielder. Howard spent the first years of high school attending Montclair Kimberley Academy, a small private school in Montclair. He left MKA in his junior year to go back to North Brunswick where he grew up, and graduated from North Brunswick Township High School.

By the age of fifteen he began playing in goal for U.S. youth national teams. He made his international debut against Honduras on the U-17 squad. In 1997 Mulqueen became the coach of the North Jersey Imperials, a team in the United Systems of Independent Soccer Leagues (USISL), and served as the goalkeeping coach for Major League Soccer’s MetroStars; he immediately considered Howard for a position on the Imperials. In May of that year, a month before graduating from high school, Howard played for the Imperials in his first professional game.

Tim is so good at basketball that he was drafted by the Harlem Globetrotters in 2009! Starred on the North Brunswick H.S. basketball team, where he beat former Duke All-American Jason Williams (then of St. Joseph’s of Metuchen) in the Middlesex County Championship game in 1997.

An athletic and intelligent goalkeeper, Howard has cemented his place in the line of great U.S. goalkeepers. Since 2007, Howard has occupied the No. 1 position for the USA, and his leadership and big-game credentials have continued to flourish year after year. Howard is equally indispensable for Everton, where he has served as the undisputed starter for several years, making more than 200 appearances, and has led his team to places in European competition and the FA Cup final. Howard is a commanding veteran personality who is relied upon by his teammates for calmness and the ability to make key saves.

[via Wikipedia and USsoccer.com]