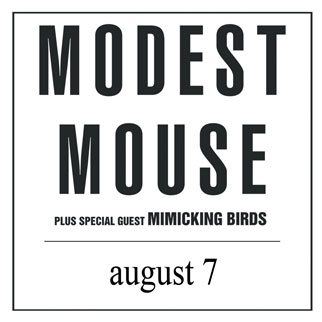 Modest Mouse tickets are going on sale on Friday for their newly announced show at the Starland Ballroom on Thursday, August 7th.  The Mimicking Birds from Portland, OR will open for them.

Modest Mouse formed in the state of Washington in 1993 and has been rocking us ever since.  The band has released six full-length albums since starting up: This Is A Long Drive For Someone With Nothing To Think About in 1996; The Lonesome Crowded West in 1997; 2000’s The Moon & Antarctica; Good News For People Who Love Bad News in 2004; and We Were Dead Before The Ship Even Sank in 2007. They released an EP, No One’s First, And You’re Next and also reissued Moon & Antartica on vinyl.

Get ready to rock!