It’s almost Fourth of July weekend and here in New Jersey that means one destination:  the Jersey Shore.  What better way to celebrate our love of the shore than by noting that we invented salt water taffy! 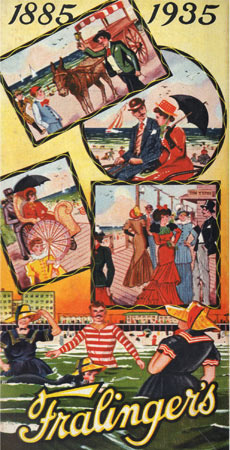 The first saltwater taffy was produced at the Jersey shore in the 1870s and 1880s. There are two stories about the invention of salt water taffy and both are centered in Altantic City, NJ.

The first story is that a taffy merchant named David Bradley had a shop on the boardwalk and it got flooded with sea water.  A girl came in wanting taffy and he instantly changed the name to Salt Water Taffy and sold it to her as a special treat.  Luckily, she liked the softened taffy and the name stuck as word spread that a new kind of taffy was available at Bradley’s shop.

Joseph Fralinger also had a candy shop on the boardwalk and according to their website (www.fralingers.com) he perfected the salt water taffy recipe and made it the popular souvenir it is today. He packed up one pound oyster boxes and created the first “Atlantic City Souvenir” making salt water taffy a household name.

Whichever story is really the truth—and it could be that both are true!—it’s a sure thing that salt water taffy is an iconic Jersey Shore treat.