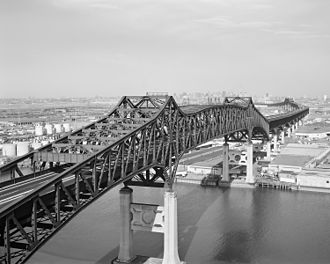 Pulaski Skyway may be undergoing a huge refurbishment but it’s still the first skyway highway.

The Pulaski SkyWay, from Jersey City to Newark, is the first skyway highway. This four-lane bridge-causeway is designated as U.S. Route 1/9 (US 1/9) for most of its length. The structure has a total length of 3.502 miles and its longest bridge is 550 feet. The structure crosses the Passaic and Hackensack rivers and Kearny Point, the peninsula between them.

Pulaski Skyway was designed by Sigvald Johannesson and opened in 1932 as the last part of the Route 1 Extension providing a connection to the Holland Tunnel. One of several major projects built during the reign of Hudson County political boss Frank Hague, its construction was a source of political and labor disputes. The bridges have been listed on the federal and NJ state registers of historic places since 2005.