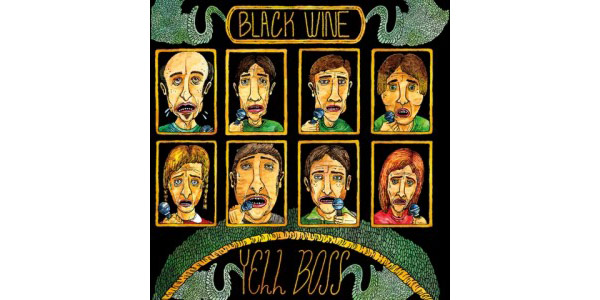 Black Wine’s new album Yell Boss (Don Giovanni Records) certainly fits how the New Brunswick band describes its sound; “no-core.” You can hear of lot of different genres in the music but listing them here would be futile. It would be very difficult to pinpoint the sound of a band where all three members share lead vocals—and each bring their distinct musical characteristics to the table—so I’m not going to try. You’ll just have to trust me that this is an awesome rock and roll record.

Black Wine is Jeffrey Schroeck on guitar, Miranda Taylor on drums, Jason Nixon on bass. They have been together since 2009 after previous bands The Ergs and Hunchback called it quits. They have released 3 previous albums: Black Wine (2009), Summer of Indifference (2011) and Hollow Earth (2012).

Yell Boss opens with the frenetic “Komrades” and gets things going with full steam ahead punk to get you moving. “Breaking Down” is a more melodious tune that shows the band’s poppier side. The fierce “No Reason” is one of my favorites on the album and is instantly addictive. Taylor takes the vocals here over Schroeck’s killer guitar hook and her own intense drumming. It’s a big, bluesy romp of a song that has “single” written all over it. “Familiar” is a stark song that has Taylor singing accompanied only by lone guitar that reminds me of the best of Exile in Guyville-era Liz Phair. It is perfectly placed in the middle of the album.

First single “Rime” has a great minute-long distorted guitar intro with Taylor’s soft voice in the background. The song then kicks into gear with Nixon yelling over a heavy, driving guitar with lyrics referencing Samuel Taylor Coolridge’s long poem The Rime of the Ancient Mariner.  I’ll let you decide what the albatross symbolizes. “Solar Flare” is a wonderfully fun, fast paced punk number that speeds along at just over a minute. What better way to follow that than a spot-on cover of The Guess Who’s “No Time”? It sounds great here and that makes sense in a record where you can hear influences of 60s and 70s rock. The album closes with the intriguing “Love Chain.” The bass and drum intro wouldn’t seem out of place on an early 80s Cure record. The song works its way steadily towards a blistering finish and then stops dead.

The album clocks in at just under a half hour but, make no mistake, there is a lot going on in that time. Utilizing three singers and their “no-core” ethic of not worrying about sticking to a specific genre makes for a powerful and diverse listen. The band has never sounded more confident and that really shines on Yell Boss.

Miranda fielded some questions from us below:

How did you guys get together?

In 2007, the three of us had a few practices at Red Bank Rehearsal studio just to goof around. Jeff had written some songs that weren’t really right for the Ergs and he wanted to test them out. (Really unfortunately we taped those practices. We listened to them recently and it was like the 3 of us set up our instruments at the top of a hill and lost balance.) After the Ergs and Hunchback broke up we decided to try again and Black Wine started being a real thing.

You all write lyrics and share lead vocals. How does that work in the studio? Do you all come in with your own songs, work on them together and decide which fit the album best?

This album is the first time one of us wrote a song and another person sung it. Solar Flare is written by me (Miranda. Hi.) and sung by Jason with backups by Brian Gorsegner. I felt like it needed a yellier voice and so…J sang lead. Normally though, we come in to practice with a new song or bits of a song and work on it together. For Yell Boss we wound up cutting a few songs we had been working on because they didn’t really fit in with the other ones.

This record seems harder than Hollow Earth. Was that a conscious decision?

Hollow Earth was consciously more poppy in my opinion. And Yell Boss is less self-conscious all around I think. We tend to naturally lean towards heavier so I guess it just showed with this record.

What was it like working with Brian “Buckets” Buccellato on the record?

It was awesome. Brian goofed around with us but also took us, and the making of this record, seriously. Which was cool. He was REALLY good at telling us when we needed to do another take. Any weird ideas or suggestions we had, he would totally try out for us. We wanted to put a toy dinosaur on Rime. He was like “Yes. I’ll set that dino mic up.” I asked if he could make me sound like Ozzy Osbourne and he was like “Yes. Let me hit this button.” Boom. Planet Caravan. I’m biting the head off a bat. Etc. and so forth.

Who did the Yell Boss cover? Are the people modeled after folks you know?

Marissa Paternoster did the artwork (which is magnificent) and the layout (which was a giant relief for Jeff.) They are, as far as I know, not modeled after anyone in particular.

Who has more cats collectively…you or brick mower?

BRICK MOWER WINS BY ONE CAT WITH FIVE TOTAL CATS!

You, like us, are huge fans of Halloween. What was your favorite costume you wore as a kid?

J: I was Darkman one year. That was pretty cool.

You can pick up Yell Boss, along with the band’s other releases, on the Don Giovanni website or on iTunes.