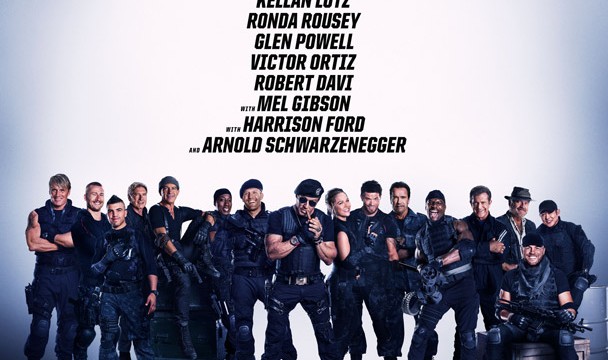 When Sylvester Stallone started the Expendables franchise in 2010 it seemed like he was trying to buy himself a surefire hit using the following formula : 1. Hire lots of veteran action stars & 2. Stage elaborate action scenes. The story and character development took a back seat but the formula worked… kind of. The first film was successful but not the monster hit that you may have expected considering the number of celebrities involved. The second one was weaker but made a respectable amount of money. Now we have the third installment and Stallone is proving that he has the best networking skills in Hollywood. Losing Bruce Willis as a result of money demands, he effortlessly added Harrison Ford to his roster. There are other new names as well, including a bunch of younger actors, filling Expendables 3 to the rim with recognizable names.. but how is the actual film?

If you are familiar with the previous Expendables films then you know that despite the long list of names the lead characters of the series are Barney Ross (Stallone) and Lee Christmas (Jason Statham) with Gunner Jensen (Dolph Lundgren) as a supporting role and Schwarzenegger in a guest starring one. The rest of the players are placed strategically to balance their screen time and give everyone a chance to do something. The problem is that the stories have ranged from the simple to the contrived with this newest one being the biggest stretch of them all.

The reason Stallone has to bring in new blood for a mission is that he has determined that too many of his team have died over the years. He has decided to force them into retirement for their own protection whether they like it or not. Facing the high level villain Stonebanks (Mel Gibson), he contacts Bonaparte (Kelsey Grammer) to construct a new team of younger soldiers to help him execute his mission. The veterans seem to have nothing better to do than hang around trying to force their way onto the mission and make fun of the new recruits but Stallone still turns them down. The rest of the movie plays out in a fairly predictable manner.

This film has plenty of good elements. It is very well made. The action scenes and cinematography look great. Antonio Banderas brings the most entertaining performance and Ford and Gibson are also very good. The younger cast members however don’t really leave much of an impression. I think it is because these movies aren’t big on character development and the older stars have an advantage of the audience having seen them in previous movies so they bring an already established personality to them. Overall The Expendables 3 is a competent, if kind of boring movie that would have benefited greatly from a more interesting story and more attention to its characters.