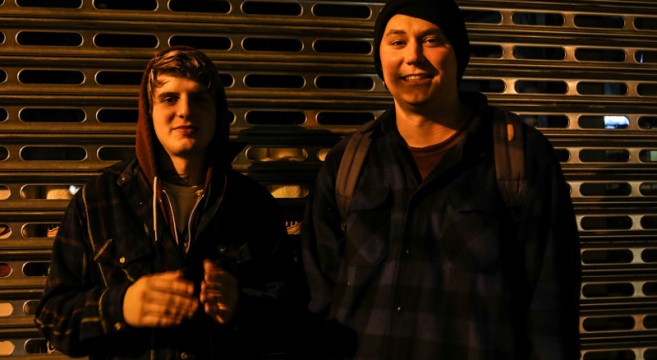 Friday was National Nacho Day so we met up with The Front Bottoms’ Brian and Mat at Barcade in Jersey City for some nachos, Tempest, drinks and Ms. Pac-Man.  Mat pretty much schooled Ed at every game. He’s now determined to get back some of his gaming mojo for a rematch later.  Sounds like I’ll be hanging out at Barcade more often for a while.

The Front Bottoms are about to steer their touring ship out to sea and head over to Australia to have about a week of shows with The Smith Street Band and Apologies, I Have None. This will be the first time in Australia for them and they sound excited about meeting existing fans there and making some new ones.  Tickets are selling out all over Australia and more shows have been added to the original lineup of dates so they’ll be very busy in the land Down Under. 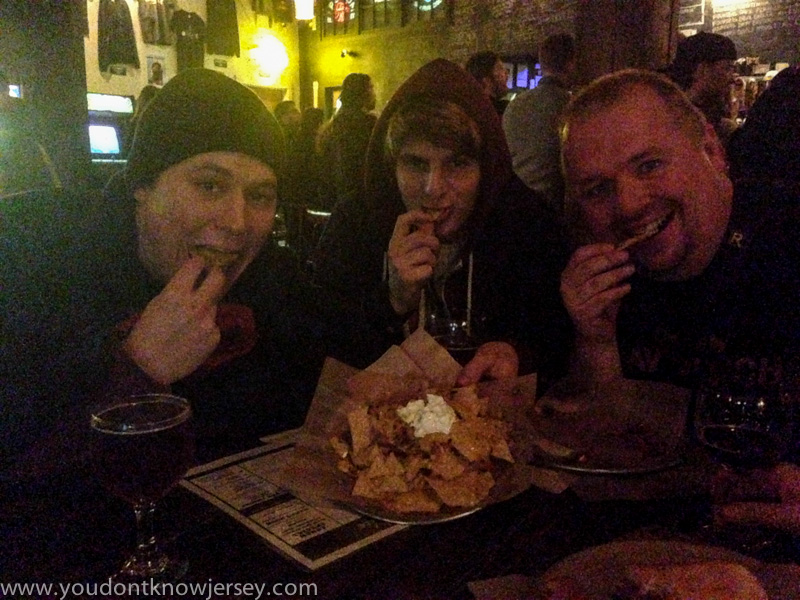 News back in the US for The Front Bottoms is even more exciting.  They just sold out all of Webster Hall for their epic Champagne Jam on December 21st. Music blog Brooklyn Vegan is helping present this giant show. 14 acts on all three stages of Webster Hall in one day of dancing, singing and guaranteed fun including comedian Chris Gethard, magician Magic Mike.  Bands they’ve toured with in the past like The So So Glos and Tiny Moving Parts along with other area acts like Craig Finn (lead singer of The Hold Steady), Kevin Devine & the Goddamn Band, GDP, Baby Baby, Emperor X, The Guru, Girl Spells, Prawn, kitty and Big Ups will be bringing the holiday spirit.

Between drinks, nachos and video games, we did actually get in a few questions.

Champagne Jam is an ambitious project. How did it all come together?

[Brian] We wanted to have a huge party. It was a thing we always wanted to do.  Have a big party at Webster Hall and get a bunch of our bands to play it.

You’ve had other holiday shows. Are you planning on making this an annual event?

[Brian] It was based on other holiday shows and keeping that tradition around. We figured it was a good time because people are home from school. It’s a good time to play a home town show but only in the city.

[Mat] We’ve had shows at Maxwells and then at the Bowery Ballroom.

[Brian] We’re calling it the First Annual show so even if it doesn’t go any further, it will be pretty funny.

You’re leaving for Australia soon for the first time touring there.  Have any fans been contacting you on Twitter or Instagram yet?

[Mat] They want to do “shoe-ys” with us. Drink beer from a shoe.  It’s an Australian thing.

How do you find food on the road?  Anything weird you’ve tried or do you stick to food you know?

[Brian] Yeah, sometimes it gets a little scary.  It works out when you get to a place and there’s people here that are “come hang.”  That’s the only way you’re going to find the good stuff.

You’ve been opening for larger and larger acts and even did the festival circuit this summer.  When will you be doing a headlining tour?

[Mat] Probably just when the new record comes out.

[Brian] Yeah, I’m sure then things will fall into place.  We just try to be as prepared as possible to when that opportunity comes up we’re ready as soon as possible.

It’s been a year and a half since Talon of the Hawk. Any new music you’ve been working on?

[Brian] Hell yeah, we’ve been working on our time off and basically trying to write a new album.  It’s been coming along really good so far.

Seems like you’re on tour all the time. When do you find time to write?

[Brian] I usually write a lot of the lyrics on tour.  I get a lot of inspiration on tour.  But, I don’t really have time to sit down with a guitar until we get home. Once I get home, I’m able to take things easy and figure things out.

We caught your first network TV appearance on Last Call with Carson Daly.  How did that happen and did you get to see the show?

[Brian] They set up at live shows and just film.  So we would have played the show whether they were there or not.  Then, they just pick the best night to show it on.  The show was about two months ago.  We saw Twin Size Mattress on the internet.

What’s it like seeing yourselves in concert on TV?

[Brian] It was cool.  It was exactly what I expected.  Sounds kind of crappy and I look like I’ve spent two months drinking. I was like, ah yes, that’s perfect!

Asbury Park’s Wonder Bar had a Halloween show where local bands all dressed up as rock legends and did a short cover set.  Who would you perform as?

[Mat] I think our number one is Third Eye Blind.  Number two was Limp Bizkit. And, Cake.  We had that one…  System of a Down. Maybe one day.

What video games are you unbeatable at? [Ed’s taking notes.]

[Brian] I’m not unbeatable at any of ’em. {to Mat} Oh wait, I did beat your high score at the Bubble game!  So there’s that one!

[Brian] So far it’s great, always something going on.  Everything you need!