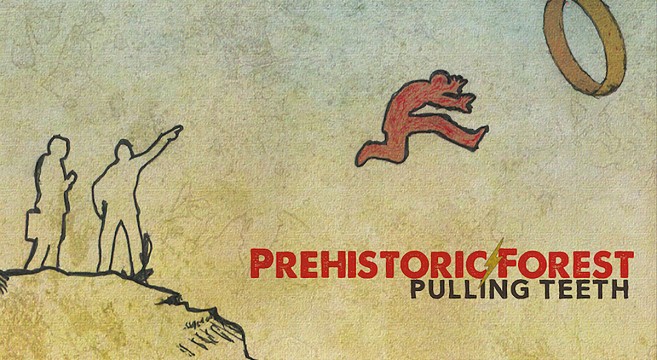 Prehistoric Forest’s New Album ‘Pulling Teeth’ Is Anything But – Interview

I love searching around the internet for New Jersey bands I may not have come across yet. A lot of times I will listen to new stuff while working on articles, sending e-mails or processing pictures. There is a lot of great music coming out of our state these days. But every once in a while there are those songs that make me stop what I am doing, take a step back from the computer and say to myself, “Damn this is good stuff.” That happened recently when I heard “Pulling Teeth,” the new single from Toms River band Prehistoric Forest. 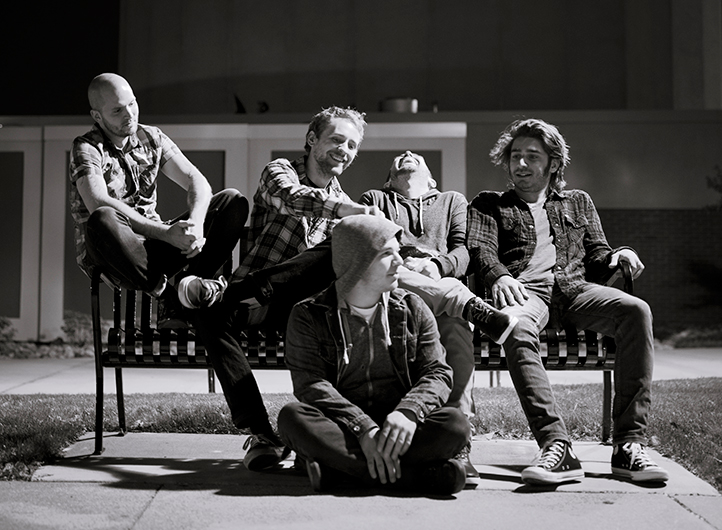 Their upcoming album of the same name, on ByrdHouse Records, is going to elicit a lot of reactions like I had. From the opening keyboard intro on “All A Dream” through the strumming guitar ending of “Thunder Loud” there is not a weak song on the album. The uptempo opener “All A Dream” sets the tone with some great guitar work from Nick Gianatiempo and vocals from Vince Matthews that remind one of some of the best indie music of the early aughts. The band is often compared to The Strokes and that makes sense. This is some excellent, well crafted rock music.

However you can’t pigeonhole the band by comparing them to one group. This band has range.  “Sanctuary” slows things down a bit with an atmospheric opening and allows the band to show off a groovier, funky side. The song shifts gears in the last minute and ends beautifully. “Brainiac” is a melodic song with great straining fuzz box vocals that hints at a 50s influence. “Point of no Return” which begins with handclaps and light guitar is pure rollicking fun. “The Curse” is a darker, heavier song in the vein of  another NJ band we like a lot, The Antics. My two favorite songs on the record are “Into The Night” and the first single “Pulling Teeth.” The former is a radio ready alternative tune reminiscent to me of Gene Loves Jezebel in their “Desire” era. I would not be surprised if this became their next single. The title track has a great fast bass opening before it is full steam ahead indie pop excellence. 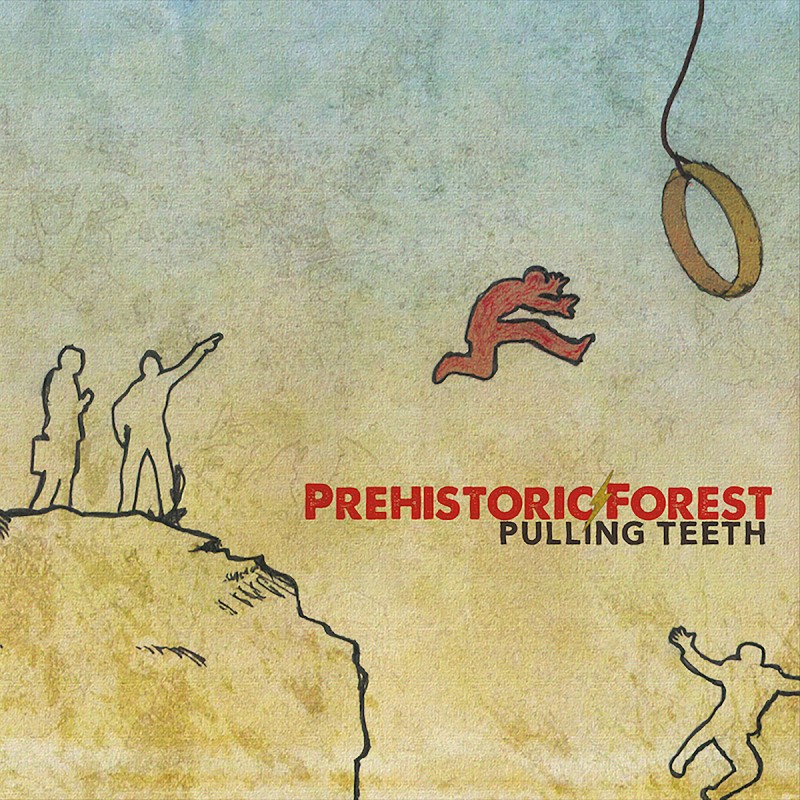 Pulling Teeth has all the markings of a breakout record and I cannot recommend it enough. We had a chance to interview the band about the record before their upcoming opening slot on Wednesday’s River City Extension Simple Gifts show.

First tell us a little about how you guys got together. How did you come up with Prehistoric Forest?
Dustin: Nick, Vin & Mikey had been performing together for years in a number of different bands that I both shared bills & a label with on and off for the better part of a decade. A few years back Nick, Mikey & I played a one off show with another local act and when the idea of Prehistoric Forest came about they hit me up. DJ is an old friend of Nicks and the package all kind of came together at that point.

Nicky: As for the band’s name, it was brought to me by Vin, and really came out of random. One of our favorite movies of all time is Tommy Boy with Chris Farley. We we’re always quoting that movie and he said he loved the name Prehistoric Forest, which came from the scene where David Spade beat up Chris Farley with the wood, and turns around saying “Hey look, a prehistoric forest!” That’s literally how the band name came about. lol. I wasn’t going to shoot it down, I thought it was hilarious.

The new record is awesome. How long did it take to write? Recording go smooth once you went into the studio?
Dustin: Some of the songs were being road tested for a little over a year before we laid them to tape, and in one songs case a FEW years and a few bands worth of attempts. Nicky is a pop maestro & doesn’t give you a lot of B-material to work with, so the songs that you hear on this release were all no brainers for the track list from conception. Once we actually started tracking the record we took a bit of a reprieve from performing live to focus all of our attention on making sure we got this one right. And of course Pat Noon over @ Eightsixteen gets the MVP award for bringing it up to snuff in the end.

Nicky: First, thank you so much for feeling this way about our record! As for the writing and conceptualizing of it, some of the newest song ideas I came up with were written and recorded with final takes within a day or two. They just sounded perfect, and we had that feeling that they shouldn’t be touched. For example, I wrote Brainiac at 3am one night and had recorded a scratch tracked demo of my guitar and the bass by morning, and the guys didn’t allow me to change anything, those are the final masters you hear today. That was the fastest we ever put a song together, it was literally done in 48 hours. And it’s personally one of my favorites on the record. Vin makes it incredible.

How would you say ‘Pulling Teeth’ is different from your self-titled debut LP?
Dustin: I’d say we broke the old adage that you have your whole life to write your first album so the subsequent releases fail in comparison. A LOT of life happened in the relatively short period of time between the first L.P. & Pulling Teeth and I feel that’s evidenced by the tone of the record; It’s earnest, kind of a futilitarian manifesto while still retaining SOME shred of hope by the closing. I’ve made the joke that the first record was the party and this one’s the hangover; There are elements of truth behind that lol.

Nicky: Dustin wrote that perfectly, lol. A LOT of life happened between these records. This one is filled with much more passion, anger, happiness, and a lot of other positive and negative energy that I feel made this record what it is today.

Will you be touring behind the album?

Nicky: My fiancee and I are expecting our first child within the next 4-6 weeks so no extensive touring is being talked about, but we’ll definitely be playing out to support this record.

You often get compared to The Strokes. Were they a big influence?
Dustin: For me that first Strokes’ album was the only album that distracted me from Weezer’s big comeback rollout back in 2001 lol. Nikolai’s bass line in “Is This It” is still one of my favorite bass lines of all time, so tastefully in the pocket. I try to emulate that vibe in a lot of our music.

Nicky: Vin was actually who introduced me to The Strokes, and at first i thought the were too “Garage” was what I said at the time… lol. But I gave them more listens, and grew obsessed. Every member in that band, Julian to Fab, all have incredible minds for their instruments. I get that the first 3 were all Julian, but its still them playing, and they are perfect at what they do. Nick and Albert are one of my biggest inspirations. Other big influences for me are Cage the Elephant, Weezer, Television, The Cars (Elliot Easton), Circa Survive, and Eddie Van Halen, he’s the man!

Mikey: The record Is This It taught me how to play drums, so I’d say so.

You’re playing the annual Simple Gifts show that River City Extension puts on each Thanksgiving Eve. Some great NJ bands have played this show. Are you guys excited?
Dustin: River City are old comrades of all of ours & we share a lot of war stories from the scene we played around in. It’ll be great to catch up & play together again. It’s a great opportunity to expose ourselves to a whole new throng of potential listeners so it’ll definitely be a good night.

Five words to describe Prehistoric Forest?
If shit fits, wear it.
Mowing the lawn with teeth.
Eating mozzarella off the sidewalk.
Supreme gonzo squared dareo rowdiness.
Is this it? It is.

You can pick up Pulling Teeth on CD, digital download, or on iTunes