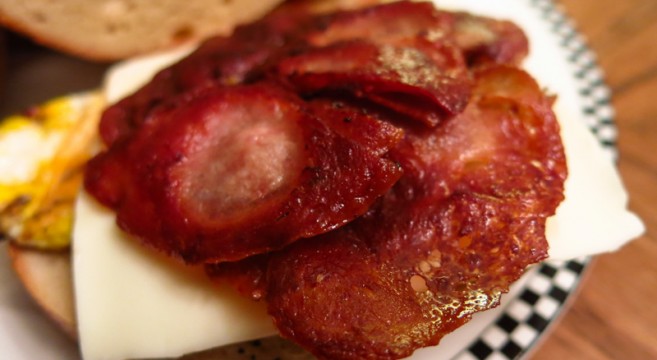 Whole Foods Enters the Pork Roll Game With Organic Artisanal Version – So, Of Course, We Immediately Tried It

Pork roll made from pasture-raised, antibiotic-free pork loin from Lucki 7 Livestock Company in northern New York ground with its fatty backing and seasoned with salt, white pepper, coriander and port wine.  Can this even still be called Pork Roll?

I’m not a regular shopper at Whole Foods but I do enjoy some of their stuff so it’s not like I’ve never been.  But, finding the deli was still kind of a treasure hunt.  It wasn’t by the butcher or cheese departments.  I walked the entire perimeter of the store until I got to the bakery section and there, tucked between the ready-made food and the cakes, was the deli case.  I guess if I went on a more regular basis and not just for a few special items I would have known that.  Anyway, I looked over the meat case and the sign on the walls and there was no mention of the new Vincenza Pork Roll that was announced yesterday in the Star Ledger.

So, I waited to be seen and asked if they had it.  Sure enough, it was there but not on display.  The lady behind the counter said they’d just gotten it yesterday and would I like to try a piece?  That gave me pause.  Had I ever eaten raw pork roll? What would it taste like cold and without the crispy brown bits?  I know it’s pre-cooked so I wasn’t worried about eating truly raw meat. But, still, it’s a little weird.  I said yes and she had to open the roll up so I was the first to ask for it. It didn’t taste like much raw.  Just kind of meaty and plain.

It was so new, in fact, that once I determined that I wanted about a half pound of slices she had to call over another worker and determine the price because the pork roll wasn’t in the system yet.  They had kind of a funny conversation along the lines of “well, it’s just pork roll so it shouldn’t be too much.” They decided to charge me the same price as the pepperoni.  When I got home, I checked the Star Ledger article which quoted a $14.99 price per pound so I paid a little bit too much.  At $8 a half pound, it felt like an appropriate Whole Foods price for organic meat though.  I also agreed with their pepperoni comparison so I learned my lesson and should have checked the article while I was in the store. As I walked away I also heard one of them say, “knowing them, they’ll charge a lot more for it.” Interesting bit of honesty!

I had no hard rolls in the house so I stopped at the bakery on my way out and couldn’t find any plain rolls.  So, I ended up with seven-grain bagels with poppy seeds and oats on the outside, whole wheat croissants and multi-grain rolls that are pretty dark and have almost a pumpernickel look. They do make a pretty picture all together, though! 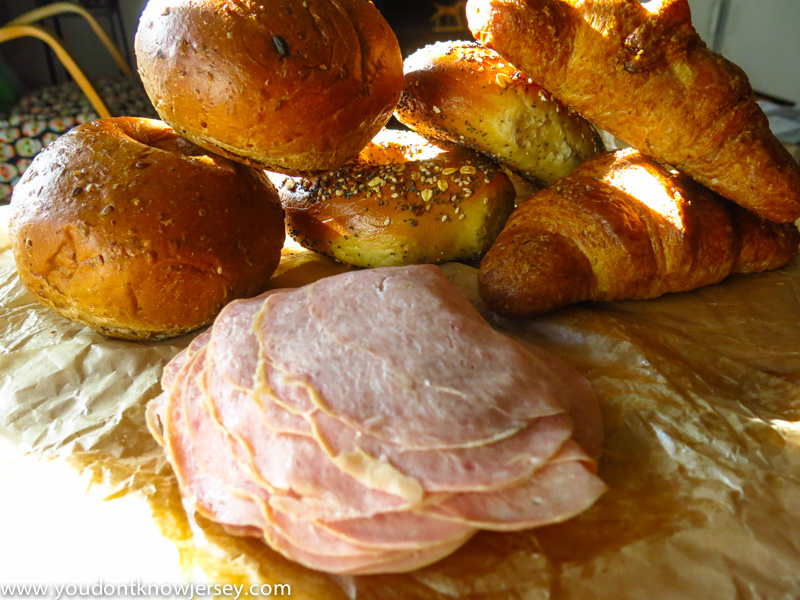 Wanting something else besides a sandwich to try the Vincenza Pork Roll, I decided to also make a quick hash from the local organic potatoes and onions I have from my CSA share. Seems fitting to use these for a Whole Foods meat-based hash! 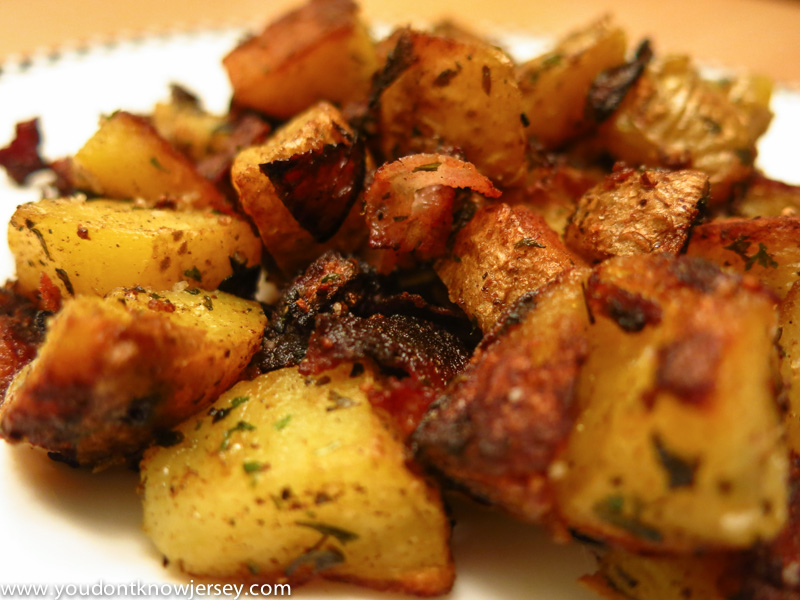 The hash ended up being my favorite way to taste the pork roll.  The chopped up bits crisped up so fast that they were very charred and the port wine taste became more predominant than the regular slices.  The onions enhanced the slight seasoning of the meat and my additional cracked black pepper added some brightness to it.

The multi-grain roll turned out to be our favorite sandwich of the three different breads we had. 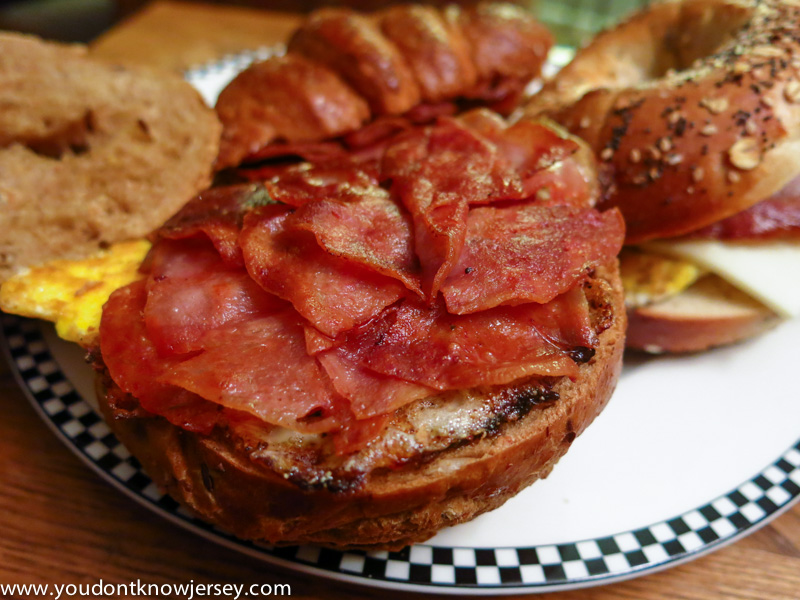 Just like the classic Case or Taylor pork roll, Vincenza’s pork roll went best on a basic roll with egg and cheese.  The slices got really crispy really fast on my griddle.  In fact, I’d ask for a slightly thicker slice next time because they gave me some really thin slices that were hard to peel apart.  I cut the classic hash marks into the slices but the meat wasn’t fatty enough to really curl up too much and need the cuts.  But, how can you make a pork roll sandwich without those cuts on the sides?? 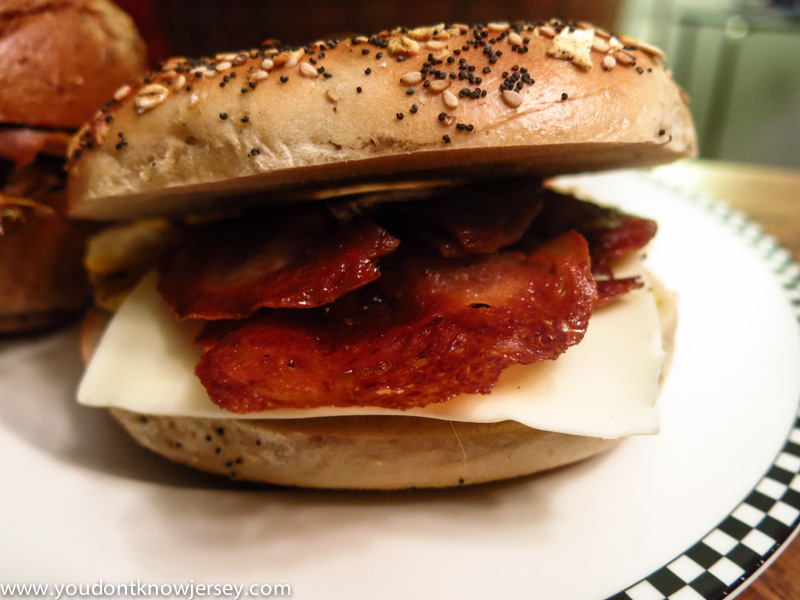 The bagel ended up being too much bread for the lightly seasoned meat.  I ended up just tasting egg and cheese and feeling the crunchy meat in every bite. I mean maybe there was some meat taste but it was pretty sparse. 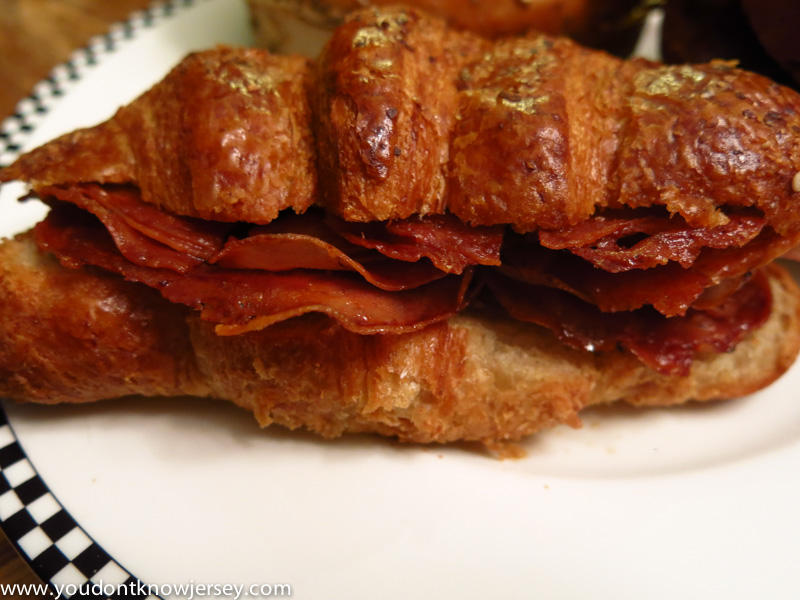 The croissant was nice and we tried the pork roll without egg and cheese on this bread.  But, the kind of greasy meat with the buttery croissant just made an oil slick in my mouth that wasn’t too pleasing.

All in all, I’d buy this again if I only shopped at Whole Foods or I was really vigilant about eating antibiotic-free meat or something.  Would I make a special trip to Whole Foods for it?  Probably not.  Not when greasy, spicy pork roll is in every bagel shop, grocery store and diner in New Jersey.