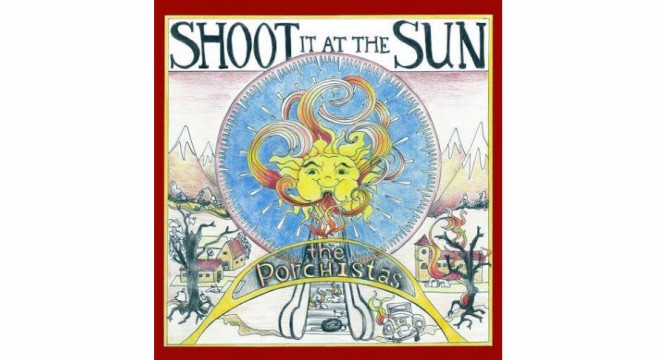 Montclair band The Porchistas are a bit of an institution around their hometown of Montclair. Their eclectic mix of folk, rock and punk with a healthy mixture of wit and fun have earned them many fans in the town and beyond.  With their wonderful audacious new album Shoot It At The Sun, the band is interested in the beyond. In fact, the way beyond. Almost every song is space themed. Think The Flaming Lips meet Dark Side of the Moon and you get the idea. However The Porchistas make it their own.

The album starts off in a serious tone with “The Garbage Corridor.” The sweet tweeting of birds quickly gives way to ominous mechanical sounds and we are off exploring the possibility of just firing all of our garbage at the sun. The slowly paced song examines the impractical “take the easy way out” environment-be-damned solution to our problems. The space themes are carried through on the next two tracks “Grand Lilliputian” and “A Piece of Junk.” The former has a great guitar solo and the later, a mournful tune about a satellite that has done its job and is now forgotten, is lifted by the stirring guest vocals of Kelly Henneberry. The pace of the song perfectly encapsulates the tone you think what a satellite lost in space would be like. 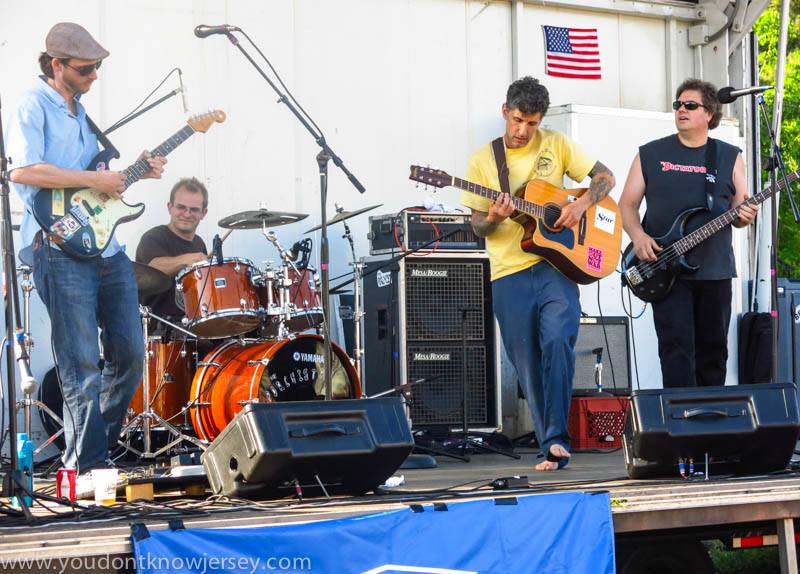 The Porchistas at Tierney’s Tavern Music Festival this summer.

With “Radio Balls” the mood lightens a bit. With the funky guitar, the horns from The Defending Champions along with the shouts of “Radio Balls!” the song wouldn’t seem out of place on a They Might Be Giants record. The fun continues with dance ready “The Moon Saloon.” Alan Smith and Adam Falzer get to show off their vocal harmonies on “Awesome Solar Rocket Ship.” Their guitars along with the drums of Jon Riordan and bass of Gerry Griffin, who also produced the album, have never sounded better.

“Cosmic Jelly” with its echoing voice-over storytelling circles back to shooting more stuff at the sun. The words are like a space version of beat poetry. Great stuff. The closer “Its a No Fit” is a wacky Italian romp complete with accordion that at first listen might seem out of place. But as the album is inspired by and dedicated to Italian astronaut Luca Parmitano, who almost drowned in space when his helmet began filling with water, it does in fact fit here.

This is an album that rewards multiple listens. There is a lot going on here and it takes some time for it all to sink in. The songs blend into one another with no spaces and this is intentional. You really need to listen to it in full. Climb aboard and blast off with Shoot It At The Sun. It’s a wonderful ride.

You can pick up Shoot It At The Sun on cdbaby or the band’s Bandcamp page, or iTunes.

Catch The Porchistas at Lucky 7 in Jersey City this Friday the 5th for their Hudson County Record Release Party and at their Annual Solstice and Holiday Bash at their home studio in Montclair starting December 20th.

Alan answered some questions for us:

Can you tell us a little about how you guys got together? Is “born on a front porch” pretty accurate?

Yessir.  We started as a much bigger group of friends.  About 7 of us.  Singing and writing songs on the porch at 148 Forest St.  After doing that for about a year and a half we decided to start trying to play for audiences.

Shoot It At The Sun has a space theme pretty much throughout. How did you come with the concept? Did it take long to write the lyrics?

Adam and I wrote the Garbage Corridor, then we realized that we both started other songs that had space themes, so we decided to keep going with it.  We both had been experiencing life events that got us thinking about things like mortality, birth. meaning or lack of meaning of life etc.  And when people are in those places, sometimes it gets us looking upward and outward.  The record was written, recorded and produced in less than a year, but a few of the songs were written a few years back.  How quickly the record was produced is a real testament to the commitment our bassist and producer Gerry Griffin put into the record.

The Garbage Corridor has an environmental element. If I was the sun I’d be pretty pissed a planet was gonna shoot its garbage my way. Were environmental issues on your mind when writing?

Sure, some of the time.  I think Adam and I share a playful cynicism about what seems like the human race’s hellbent desire to destroy ourselves through our own genius.  We’ve explored that theme on other albums and it returned here.  It comes up again in “Its a No Fit” (A society that throws away its most valuable cultural artifacts because they cant make them fit on their new home) and “A Piece a Junk” (a dying satellite is left to drift forever in space.)

There are serious themes and songs and there are lighter songs. Were you going for that balance?

We weren’t going for it, but usually if we are writing a full length a song’s mood will reflect whatever mood we are in when the song gets started.  And sometimes a hook or a line comes when we are hanging at the house with guitars, laughing and having a good time.

The album art is amazing. Did you tell artist Nicole Esclamado exactly what you wanted or did you give her a general idea and see what she came up with?

Nicole and I live on the opposite sides of the country, but we have been making art together for many lifetimes.  I sent her an early recording of The Garbage Corridor.  Then we talked on the phone and exchanged a few emails about the vision Adam & I were looking for.  She did the artwork on two of our previous albums “Save the Earth” and our Live record.  She really blew us away with her vision in this record.  She is hands down my favorite visual artist.  The characters she creates are unique, slightly dark, and always hysterical.

What makes your hometown of Montclair special?

Oh man, Montclair is such a gem of a New Jersey town.  There are a lot of smart, creative, politically savvy people here. It also manages to hold onto its diversity in spite of what seems like the town government’s continuous desire to change its landscape through things like overnight parking regulations ($600 a year to park in lots or on the street for people with no parking spaces), atrociously high rents, and a catering to landlords and big developers who get to do whatever they want here. But regardless, artists, musicians and intellects want to live here because of its history, location, landscape and mostly because of its people.  The support that we get from the music community, the local press, local businesses and the Forest St neighborhood is a real reflection of the sense of community that gets nurtured in Montclair. I love this town.

Five words to describe The Porchistas?

Oh jeesh, I dunno.  We’ve been using Lyrically driven folk, hippy, punk, throwback rock and roll for a few years.  Recently someone called our style “Montclair front porch swing” – I thought that was a fun description. But I’ll leave it up to you Ed! Maybe you’ll come up with our new tag line!