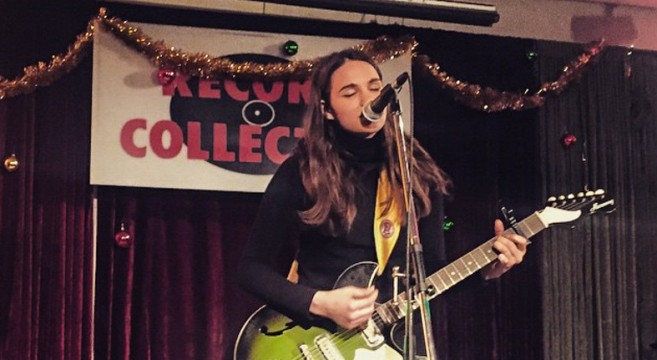 Janet LaBelle & Ricky Byrd at The Record Collector in Bordentown

About a block away from where I live in Bordentown is a spot called The Record Collector that tempts me daily into throwing my cash at dusty wax. I’d known the Record Collector, visited the Record Collector, and spent a whole lot of time and dough there when I lived further away so when I recently moved a block from the place I deliberately did not (and have not yet) set up my turntable at home. Their endless selection being within walking distance gives me a very real fear for my wallet.

The Record Collector, in addition to housing way too much vinyl for anyone to ever listen to, regularly hosts live music. I’d never been to a show because truthfully, they tend to book a lot of older quieter acts that draw in grey-haired couples from an older generation chock full of disposable income and empty nests. I’m 26. Granted, the people my age generally bitch about ticket prices for live local music going above $5 and don’t buy CDs really… maybe it’s a generational thing regarding the general “worth” of music to us, the fact that we’ve got less money than our parents (and a lot of us live with them too), or a combination of both, but either way, the Record Collector’s series of live shows is a great business and I’m glad that they’re in business. I just don’t ever really wind up there for a show. Because I’m 26. 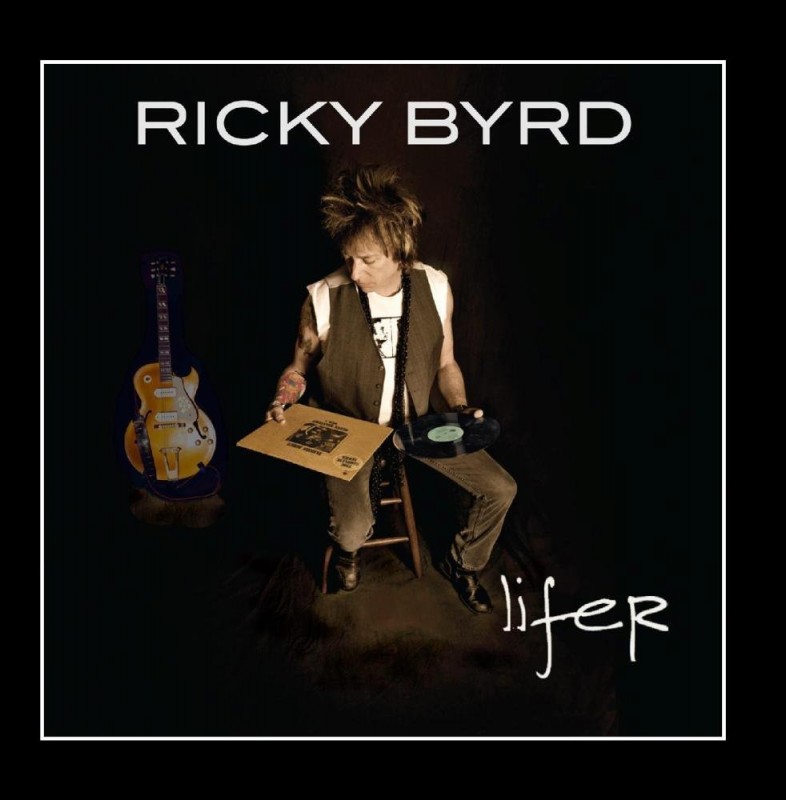 Tonight I went to my first Record Collector show. Headlining was Ricky Byrd, former guitarist with Joan Jett and recent Rock’n’Roll Hall of Fame inductee. Opening for him was singer/guitarist Janet LaBelle. Janet’s a self-described “collector of records, sounds, and shells” from New Jersey (she lives in Brooklyn now but we’ll forgive her) who channels the aesthetic of Françoise Hardy, has a voice like a hot sunny morning cigarette paired with hot green tea, plays a black and green ‘60s Harmony guitar, and pulls influences from the corresponding era of popular music. Girl groups, soul, the Zombies kind of stuff. Serge Gainsbourg and girls with bangs and cat-eyes. Heartbreak songs with attitude and electric guitar, you know? The incredible thing, though, is that Janet is somewhere around my age. At the Record Collector! Ok, Ricky Byrd was headlining, and he’s a 58 year old guy who’s been sober for 27 years, does a lot of work with music therapy in detox centers and rehabilitation, and kind of looks like an ‘80s Bob Dylan with Rod Stewart hair and a polka-dot silk scarf and none of that necessarily screams “WOAH, COOL!” to a 20-something year old but… dude played with Joan Jett! He legit teamed up and shared a stage with her. And I have to say that the guy really won me over. He’s a time-tested performer and charismatic entertainer who does know how to rip up a guitar and sing the blues. I don’t think I’ll be rushing or going out of my way to catch him live again but I picked up his latest CD and talked to him after the show about getting in contact about the drug/AA things he does because unfortunately we both are too sickly aware of the heroin and prescription pill epidemic in this state.

If you or someone you know needs help, get some. I can’t help much but if you e-mail me (conormeara@gmail.com) I can put you in touch with someone who can.

Anyway, back to the show. Janet opened up with just herself and her green and black hollow-body guitar from the ‘60s and she sang a whole bunch of perfect original pop songs without a hitch. She closed her set with three songs on ukulele. Normally Janet plays with a backing band, and when normally you play with a band behind you it can be pretty terrifying to try to pull off a set with the same energy and confidence you have when you confront an audience as a tribe. But Janet faced us all on her lonesome and the room was enamored as far as I could tell. I was in the second row (this was a seated event – there were also hot dogs, popcorn, coffee, and soda for sale… it felt a lot like watching a movie) and I couldn’t really keep my eyes off of her but people were quiet during the songs and clapped loudly after each one and the vibe was very good. She’s got a couple EPs for sale and is about to start recording something new. I can’t wait to hear where she’s headed. 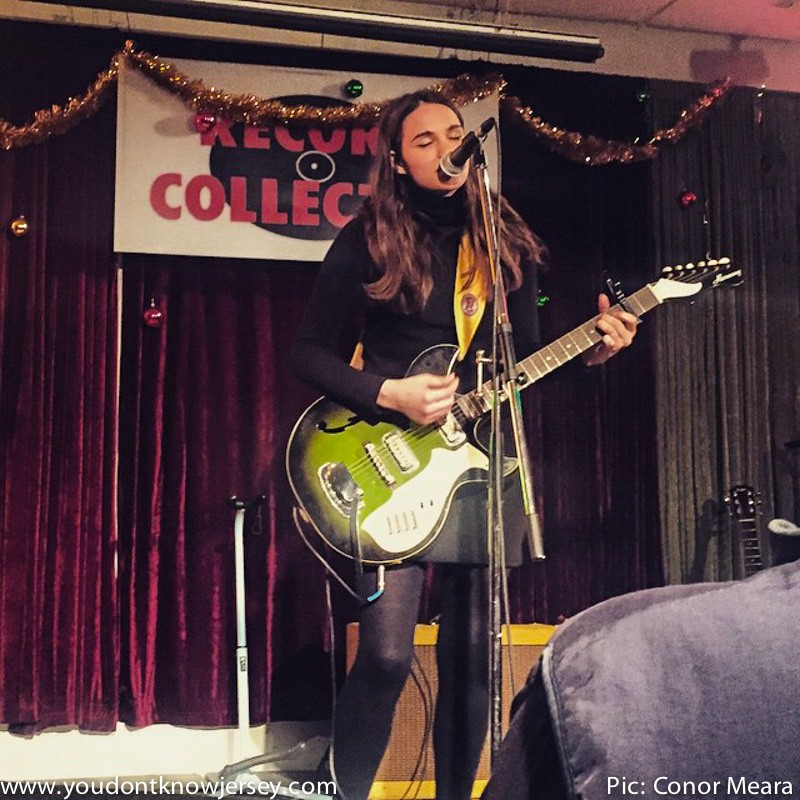 Ricky Byrd played a whole bunch of songs in about an hour long set. He played covers, he played interpretations of blues and soul standards (with a cool medley of Slim Harpo’s “King Bee” into Jimmy Reed’s “Bright Lights, Big City” in there), and a bunch of songs from his most recent solo album, “Lifer”. He played a big red jumbo acoustic Gibson guitar and when he wasn’t in front of the microphone singing he sauntered around to the two sides of the stage striking poses and facial expressions of a 20-something year old Blackheart in 1982. You know the riff to “I Love Rock ‘n’ Roll”? Ok, that’s Ricky. His voice was on point too. He played two Sam Cooke songs in there and while, ok, it definitely wasn’t Sam Cooke, he didn’t butcher the tunes and he hit every damn note. He said it took him a couple of decades of Jack Daniels to get that voice and I believe him.

So here’s the deal – the Record Collector is cool if you want to buy records. It’s cool for seeing a show if you’re over 40 because you’ll probably recognize a lot of the acts that swing through and you can go out for some hot coffee and maybe some popcorn and soda or a hot dog with your wife on a Saturday night and see some really professional top-notch acts and get nostalgic about when maybe you still had hair and weren’t so cranky. It was really cool that Janet played there (and this wasn’t her first time, either, so I hope they keep bringing her back) and it’d be cool if they got more younger acts to play there… but I totally understand that we’re pretty much a penniless crowd so I don’t blame them for sticking with what works. Ricky Byrd is a good dude and he’s got a rock ‘n’ roll heart with a lot experiences both way up and way down between touring with Joan Jett in ‘82 and today in 2015. It gives me hope that he’s been sober so long because, shit, that means he lives to see the day where he can go to the Rock ‘n’ Roll Hall of Fame and see his face in there, somewhere between Janis Joplin’s Porsche and Joey Ramone’s leather jacket . That’s pretty rad. There are a lot of people, some of whom are very talented and creative musicians, who might not make it that far. And I’m glad he still loves rock ‘n’ roll because a young (relatively) guy like me can go see him play and pick up some things by watching his hands and listening to what he’s got to say. I had a great time, I hope the friends I brought did too, and I look forward to walking down the street and catching another show soon. Hopefully next time it won’t be 20 degrees and raining out.

about the author: Conor Meara