A few months ago, we attended a charity concert held by CoolDad Music and Little Dickman Records in Asbury Park supporting the Foodbank of Monmouth and Ocean Counties. We were so inspired by the amount of food everyone brought to the event that we thought we should make the Foodbank our featured charity this month. 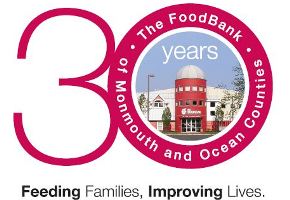 They started in 1984 when they purchased a dilapidated warehouse in Spring Lake. Members of many of the shore area’s communities donated work, office furniture and supplies and food streamed in from hundreds of donors. After just one year, the FoodBank was already serving 100,000 pounds of food.

Ten years later, nearly two million pounds of food was being distributed annually from the same small warehouse. Bursting at the seams, the FoodBank undertook a capital campaign in 1998 to construct a new facility in Neptune. Three years later, their current 40,000 sq. ft facility became a reality.

Today, the FoodBank distributes more than 10 million meals annually through a network of over 300 feeding programs. But hunger in Monmouth and Ocean Counties is no longer a crisis that can be remedied with emergency food alone. That’s why the FoodBank works toward long-term solutions to the chronic problem of food insecurity. Through programs and services like their Culinary Training Program and nutrition education, and outreach programs such as SNAP and free tax assistance, they are working to build food-secure communities.

We donated to the Foodbank this month and you should, too!