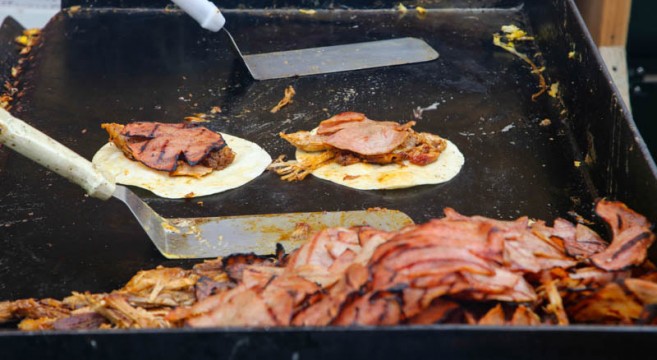 There are a lot of great ways to kick off the Memorial Day weekend. Saturday May 23rd in Trenton is perhaps one of the most New Jersey ways to get the weekend celebration going. Mill Hill Park, historic site of the Battle of Trenton in 1776, is the location of the 2nd Annual Official Pork Roll Festival and it is sure to attract a ton of visitors. This is the day to celebrate Trenton’s favorite family treat. We attended last year’s inaugural event and the turnout made news all over the state. It was incredible. This year’s festival promises to be “bigger, better and thicker”. 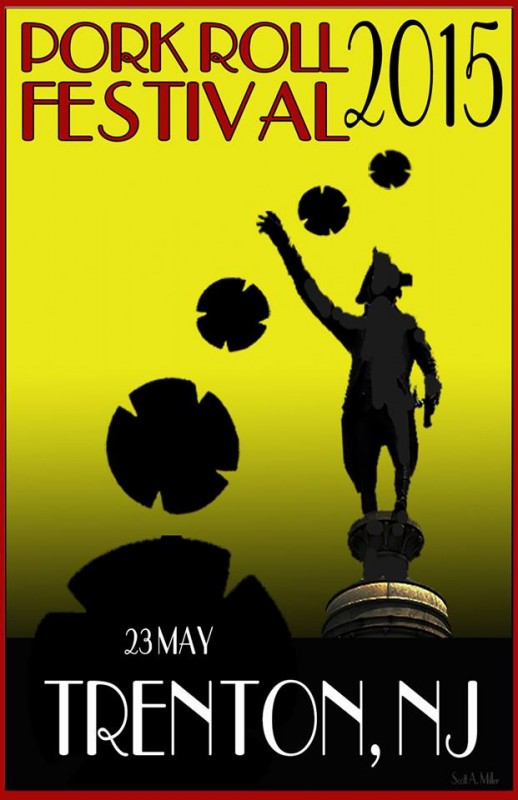 Among the highlights this year will be the 2015 Pork Roll Queen and Recipe Contest Finals, children’s activities, and food trucks with pork roll themed dishes. The event will also showcase the best of Trenton-area jazz, blues, R&B and indie rock. Perhaps best of all a portion of the festival profits will be donated to Trenton Veteran’s Services and the Trenton Area Soup Kitchen.

Oh and need I say more? Three words: pork roll pierogies. Being a Polish boy from New Jersey, I can’t help but be excited about that one!

Tickets are limited so be sure to pick them up now here.

We had a chance to chat with event organizer Scott Miller.

What made you start the Pork Roll Festival last year?

I started the festival because I wanted to create something new and exciting for the City of Trenton. I grew up in Wilkes-Barre, PA where there are many fun outdoor church Bazaars, festivals and carnivals. I miss that kind of stuff, and have been enjoying similar popular activities here in the city such as The Trenton Punk Rock Flea Market and Art All Night. Not wanting to wait a year to make it happen, I rounded up some friends, found a venue and steamed forward to produce the first festival with just 3 months of planning.

Were you surprised at the popularity of the First Annual festival?

I knew it was a good idea from its inception.  I had some recent experiences using social media to promote other events, and knew we could reach a wide audience, but the response did exceed my expectations.

What will be different this year, besides the location?

The goal with this year’s festival is to have the maximum positive economic impact on the city.  I live and work downtown, just one block from the festival park.  I am actually bringing the festival to my neighborhood this year!

Other potential venues for the festival in Trenton don’t allow attendees to see or learn anything about our city.  We want people to come here and get a richer experience of what Trenton has to offer.

The festival will offer information to visitors on Trenton’s other events, attractions and history.

The Mill Hill Park is located in the historic district of downtown Trenton and is the site of the 2nd Battle of Trenton where Washington defeated the British and Hessian armies after crossing the Delaware River in 1776.

It’s situated on the beautiful Assunpink Creek, just a few blocks from the Old Barracks, The NJ State War Memorial Theater, The State Museum, Planetarium, and the Trenton Battle Monument (look out tower with bronze statue of George Washington, built in 1890 by John Taylor, founder of Pork Roll).

This year the festival will be bigger – we will have up to 15 food vendors with pork roll themed menus and other good stuff (food trucks, restaurants and caterers).

The festival will utilize a section of East Front St. closed between S. Broad and Montgomery) and The Mill Hill Park, we will have lots of space!

Tell us a little about the relationship of Trenton to pork roll and the importance of the festival being in the Capital City.

Pork Roll history can be traced to the Revolutionary War era in Trenton.  I joke that “the Illuminatti brought it from Europe in the early 1700’s to Trenton and set up the first Masonic Lodge to protect it’s secret formula.” However, pork roll certainly did share roots (and dinner tables) with the Free Masons.

The 1st Grand Master of North and South America recognized by the Scottish Rite was in Trenton NJ at this lodge.  There are references in old letters regarding pork roll type sausages that were made in cotton bags being eaten by Washington’s troops. Washington was a Free Mason.

For a few years, the Opera house was home to the Masons while they built a new lodge. In 1890, John Taylor was part of the group that built the Battle Monument, a tower with elevator and observation deck that honored Washington’s defeat of the British. It is on the National Historic Register.

Taylor Provisions is still located in Trenton just one mile up the Assunpink Creek from the Mill Hill Park/Battle of Trenton location.

Today, Trenton is also home to Case Co. who originally started making pork roll in Belle Mead, NJ. Case is a family-run business located in the same neighborhood for over 75 years.

Not much is made in Trenton anymore. Pork Roll is loved by nearly everyone, and it is a great asset for the City.

Does calling it “Taylor ham” actually upset you like it does some others?

No, it just sounds out of place, because nobody calls it Taylor ham anywhere in Central or South Jersey!

Was pork roll a staple in your house growing up?

No we didn’t have it in Wilkes-Barre, Pa, but we did have similar sausages and meats by German and Polish butchers. I was always a fan of Lebanon style bologna which can be pan-fried and is somewhat similar.

What is your favorite non-traditional way to use pork roll in a meal?

I like to fry it, chop it and toss it in some rice to add flavor.

Also, I like to make pork roll milkshakes. not really, but it’s funny ; )

Pin It
Previous post:
Things to do in Jersey – May 2 3 2015 Next Post:
Marvel’s The Avengers & Midnight in Paris – Similarities & Coincidences