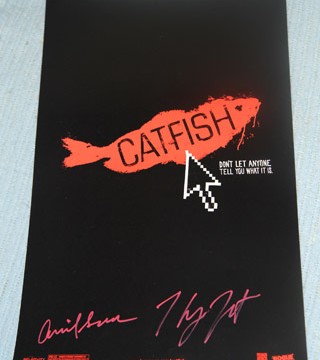 Here’s a movie review from our archives.  You Don’t Know Cats will feature all movies about cats or with cat in the movie title.

My friend called me yesterday and asked me if I wanted to go see a movie called Catfish with him. He said the movie “is a documentary type movie filmed like the Blair Witch Project” and it is only playing in 12 theaters in the whole country, including Edgewater, NJ. We got another friend together and headed over to the theater. When we got there, I noticed 2 things. One is that the poster for the film was very cryptic. It says: “Don’t let anyone tell you what it is.”  Second, there was a sheet of paper on the poster stating “There will be a Q & A session after the showing with the makers of the film.” As we entered the theater, we were handed a survey form and pencil, similar to when you see a screening of a film to be released in the future.

It is very interesting to sit down and watch a movie that you know absolutely nothing about. I think it’s a great way to see movies, and is the perfect way to see Catfish. As the movie unfolds, you experience it in much the same way as the people in the film. This works very well since the movie is about uncovering a mystery. There is a great suspense to this film that comes from not knowing what is going to happen next. What happens and the directions that the story takes completely surprised me. All I will say about the film is what is revealed in the trailer: A guy meets some people & develops relationships with them on Facebook. If you go to the site, the trailer will show a little bit more information.

Pin It
Previous post:
YDKC Cares: Feline Charity of the Month – Tabby’s Place: A Cat Sanctuary Next Post:
Great Moments in NJ History (as told by cats) – Battle of Trenton