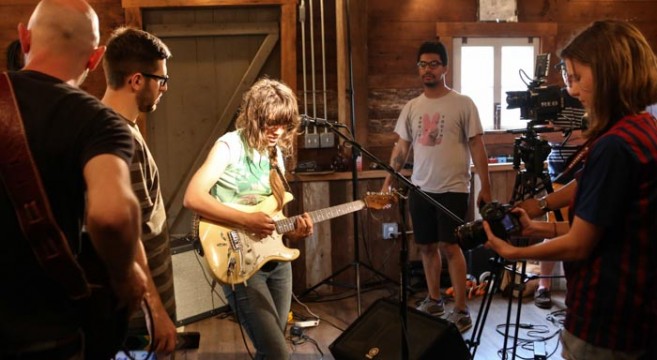 There is something exciting happening for New Jersey music in the quaint hamlet of Bordentown. Behind the tree-lined main street with its historical homes, independently owned shops and inviting restaurants is a small filming space in an actual carriage house that at one time was home to an actual carriage, coachmen and horses. Today a part of it is the home of the new YouTube series ‘Carriage House TV.‘

This beautiful rough-hewn space sits below the residence of Conor Meara—one of the New Jersey music scene’s many multi-talented hyphenates.  In fact he and many production members are in the bands Roy Orbitron and YJY. Conor acts as producer and sound engineer for the Carriage House TV series and one of the only things he’s not is a coachman. We headed down to the Burlington County town to get a behind the scenes look at this amazing program and its many talented crew members. 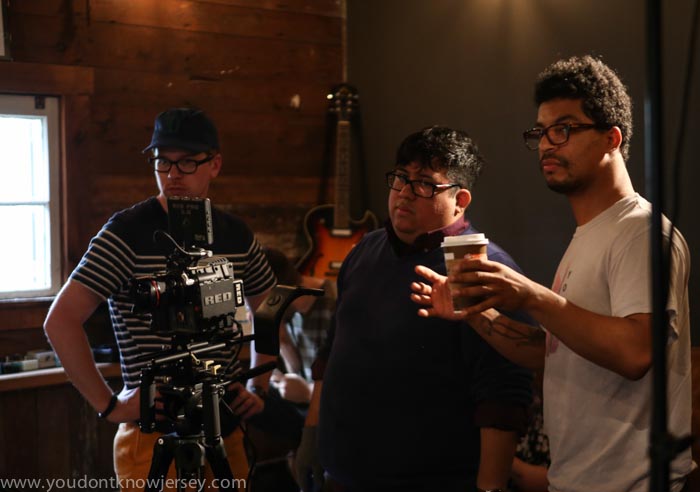 ‘Carriage House TV‘ is not only helping New Jersey musicians gain exposure, it also allows viewers to get to know the artists a little better in an intimate setting. The show features bands performing stripped-down versions of two songs along with an interview conducted at local businesses around Bordentown.

When we arrived, Meara and sound mixer/engineer Tim Fitzpatrick were busy setting up equipment and giving the soundboard an inspection. I took the opportunity to talk a bit to executive producer Kevin Lawton. He told me what they like to do is once the musical guest arrives they have them set up and do a quick soundcheck. Then they head downtown to film the interview before the actual taping. He explained this provides an opportunity for the musical guest and the production staff to get to know each other and make everyone feel relaxed before the cameras actually roll. 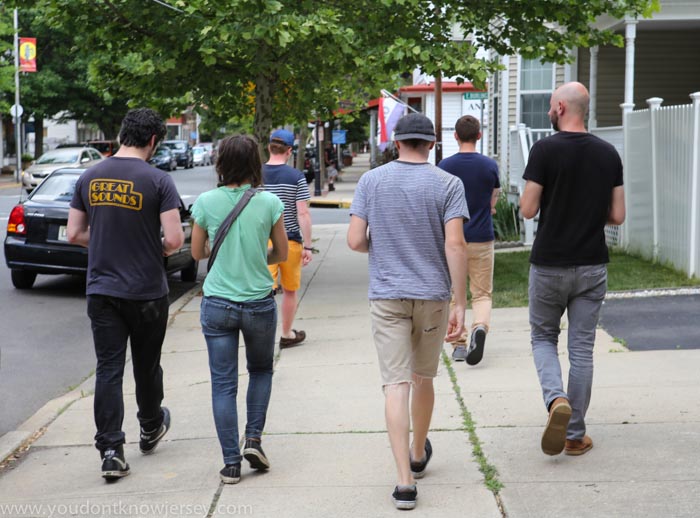 Francie Moon, one of our favorite NJ musicians, was the musical guest for this episode. She arrived about the same time as we did. She, along with bassist Adam Pumilia and drummer Rich Slurry, loaded in and set up their equipment. They tuned their instruments while the crew went about making adjustments. Executive Producer Ricardo Lorenzo and Director Dean Luis were very busy making sure camera angles were ready to go. Kayla Smith, guitarist with Asbury Park band Glycerine Queens, shoots B roll footage. You would think with all these people working in a small space it might get a bit crowded, and it does. However they manage not to step on each others toes, figuratively and literally. Everyone seems to know their roles well and where they need to be at all times.

Soon the entire production staff and band walked into downtown Bordentown to go film the interview. The day’s location was the Under the Moon Cafe on Farnsworth Avenue. It is a warm and inviting place with great decor that includes old radios and silver serving pieces all over the walls. The staff could not have been more obliging to the army of us that basically took over the rear section of the restaurant. ‘Carriage House TV’ host Steve Sachs has a great personality and makes his guests feel comfortable easily. He cracks jokes, sometimes at his own expense, and keeps things light. That is not to say he doesn’t take his role seriously. I asked him how he comes up with his questions. He does a lot of research which includes listening to an artist’s work and checking their social media. He always keeps a notebook on him since he never knows when a great question will come to him. 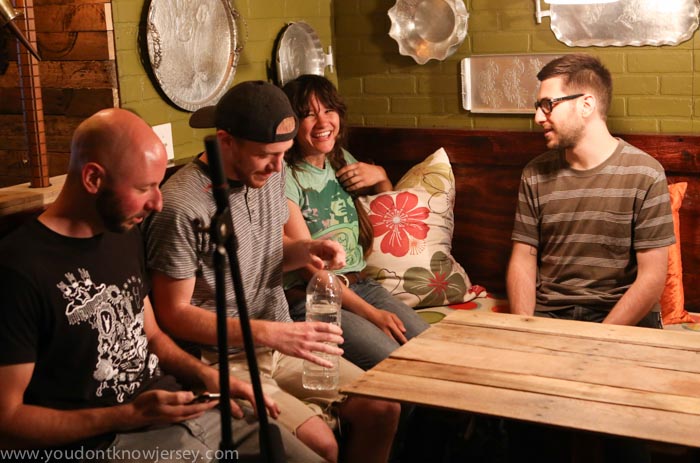 After the interview is finished, we head back to the carriage house and the filming of the musical performance begins. We all get quiet and Sachs marks the scene with the clapboard and we are off. Francie Moon runs through a song and it sounds awesome. She is an amazing guitarist and her voice is unique. A great start. Now the band has to perform the song again. And again. And yet again. Lorenzo tells her “You’ll be playing this song a lot.” They have one main camera so they have to do multiple takes to get the look they need. Happily the band doesn’t mind. 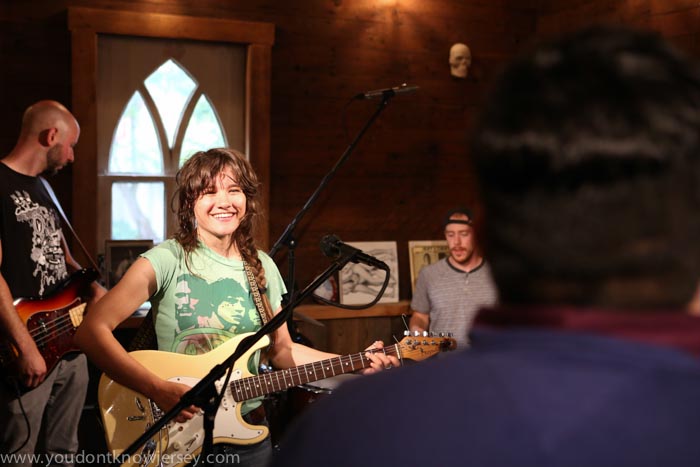 We bid our goodbyes shortly thereafter so they can film the second song without us getting in their way. We were very impressed by the work that goes on behind the scene of a taping of ‘Carriage House TV.’ It is quite an endeavor and all that hard work shows in the final product. The production team obviously loves what they are doing. There are a lot of spotlights pointed toward the music being made in New Jersey these days. ‘Carriage House TV’ is bringing you some of our brightest stars, both in front of and behind the camera. Check out our pictures below. 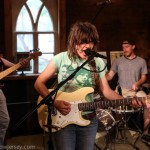 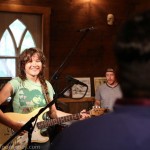 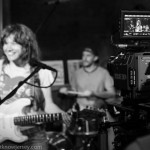 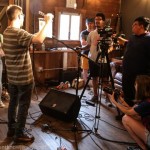 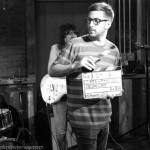 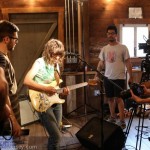 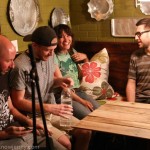 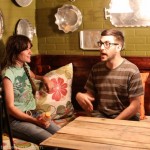 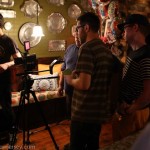 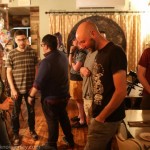 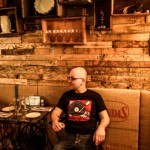 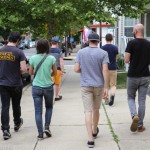 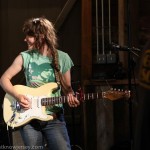 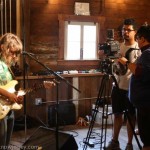 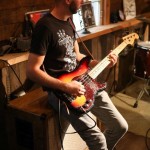 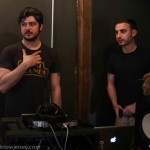 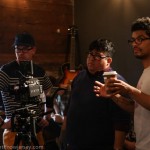 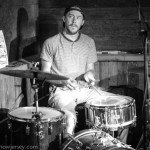 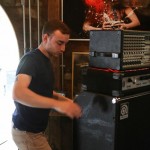 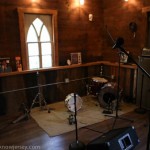 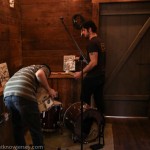 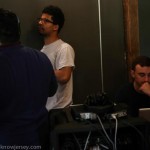 Pin It
Previous post:
Japan’s Shikoku Island All Stars Team Playing NJ and NY Teams in the CanAm League Next Post:
Things to do in Jersey – June 20 21 22 2015