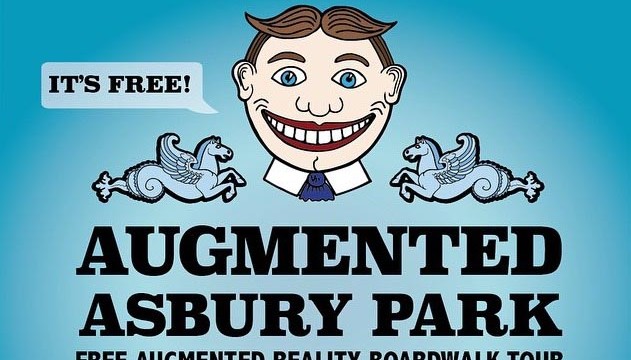 Check Out History on Your Phone with Augmented Asbury

Have you ever wondered what the Asbury Park Boardwalk Carousel looked like when it was running in the cool round building at the end of the Asbury boardwalk? Or wondered where the S.S. Morro Castle beached itself and burned right off the boardwalk in Asbury Park? If so, you should check out Augmented Asbury‘s cool program on the Asbury Park boardwalk.

The project is a collaboration of Monmouth University professors Mike Richison and Marina Vujnovic and Kean University professor Ed Johnston. They created Augmented Asbury after thinking about how important these historical buildings, events and memories were to the community and exploring augmented reality technology.  All you need is two phones, a phone and a tablet or a phone and one of their posters.  Download an app called Junaio onto your iPhone or Android and use the other phone/tablet/poster to scan QR boxes when you arrive at different sites around the boards.

You can use the technology at any time and without going on their tour but we recommend joining them on Sunday July 26 or Sunday August 2 at 2:30pm. The tour group meets in the Grand Arcade of the Convention Hall in Asbury Park.  The professors are extremely knowledgable on the history of Asbury Park and give a great tour explaining how they built all the pop-up pictures.

They had to find as many pictures as possible of the items they were virtually building. They visited Hatfield, Pennsylvania to visit the Philadelphia Toboggan Company, the original manufacturer of the carousel. There, they found out that the carousel was completed in 1930 and that it was the last carousel the company built. Later, they also discovered that the boardwalk carousel was moved from Asbury Park to its new home in Myrtle Beach South Carolina in 1990. It’s now in a small amusement park called “Family Kingdom.” That’s right, it’s actually still in existence! They professors then drove to Myrtle Beach to shoot hundreds of photographs, constructed and textured 3D models with the photos, and through augmented reality, put a digital reconstruction of the boardwalk carousel back in the carousel house!

Here’s what the carousel building looks like today (there are concerts in there this summer!):

And, these are some screenshots of what the virtual carousel looks like: 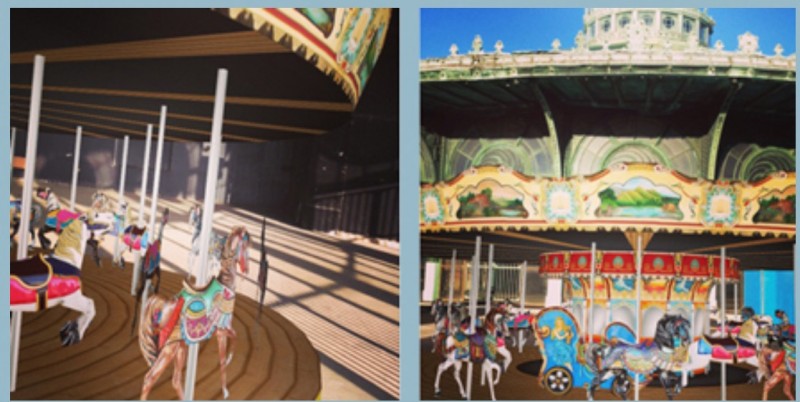 This Augmented Carousel project was exhibited at the World Maker Faire NYC 2013. From there, they launched a Kickstarter project to build even more historical virtual building.

The Asbury Park Library collection provided images of major buildings and events such as:

– Palace Amusements, a structure that housed games, a funhouse, and the other famous Asbury Park carousel,

– Morro Castle, a doomed passenger liner that caught fire off the coast and beached itself in Asbury Park,

– Monterey Hotel, a large luxury hotel that used to be just north of the still-standing Berkeley Hotel.

Now, you can see all these places using your phone as you walk along the boardwalk in Asbury Park.

Check it out this summer. You won’t be disappointed!