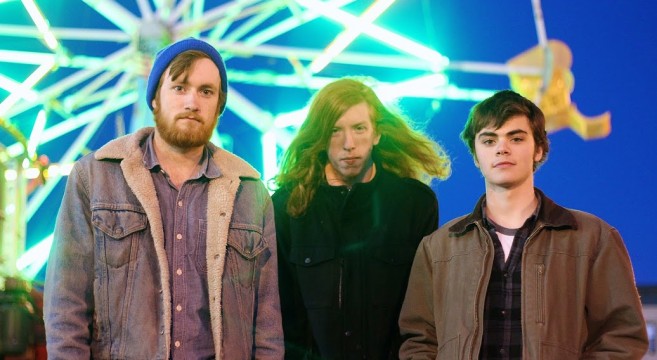 YDKJ is excited to premiere the second single off Perennial Reel‘s upcoming sophomore album ‘Ribbon.’ The Jersey City trio has been turning out their unique take on indie progressive-pop since 2011. New single “Prisms/Deserts” is proof that the band is perfecting their sound while staying true to their original vision.

The band consists of Timothy Erbach on bass, synthesizers and vocals, Evan Dibbs on guitar and vocals and Rory Bauers on drums. It is an achievement that they can get such a multidimensional and interesting musical landscape with just three members. New single “Prisms/Deserts” is an ideal example of what they can accomplish. The song begins with some intricate guitar swirls and lyrics that come across like beat generation poetry. The song shifts to sparser music in the middle with lyrics like “images colliding, of layers spiraling” before returning to the original guitar hook. The powerful ending with strained vocals is striking. This is ambitious work and multiple listens are rewarded.

The band is currently on tour in the southwest and Pacific coast but will soon start to work their way back across the country and finish up the tour right in their hometown of Jersey City at The Dopeness on August 15th. You will not want to miss that show.

Without further ado, the single is below:

Pin It
Previous post:
Sundown at the Carousel with Wreaths, Sharkmuffin, and Lost Boy ? – Photo Gallery Next Post:
Check Out History on Your Phone with Augmented Asbury