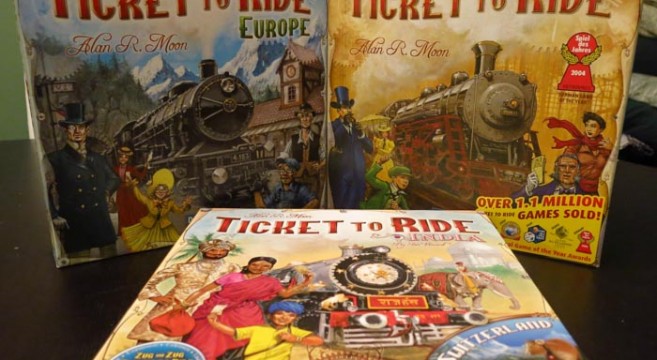 Ticket to Ride is a game we’ve been playing and loving for some time now. The basic premise is that you get train routes that you’re trying to complete before anyone else takes over the same tracks that you’re trying to take. It takes less than an hour to play and you learn some geography along the way. As long as you can read, you’re old enough to play.

The original game board is a map of North America. 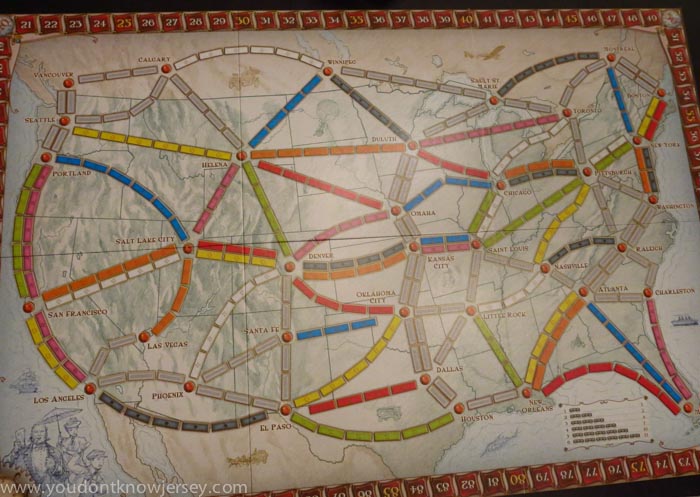 You collect cards with colors on them to claim the different lengths of track.  There are wild cards to help you get the longer routes. Grey lines on the board mean any color set of cards can claim the route. 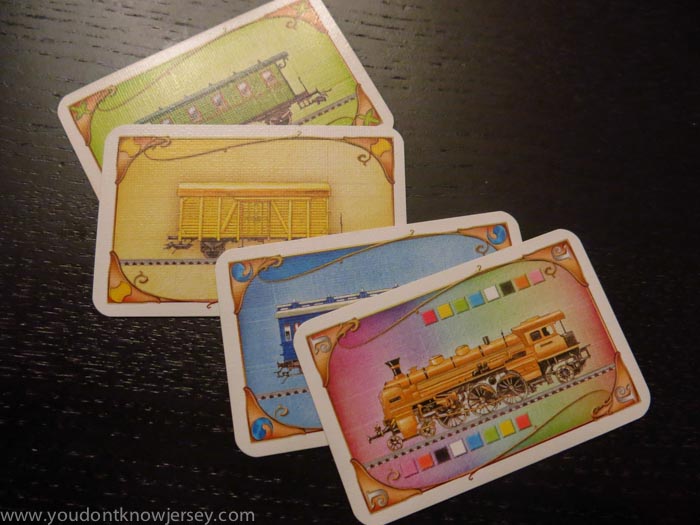 The rules vary slightly based on number of players as to how many people can own a length of tracks at a time. In games with more players, you can co-own tracks like the yellow and black trains here. 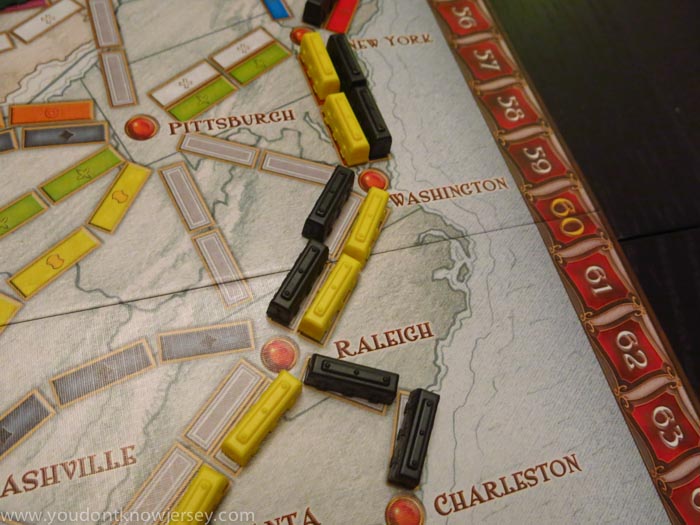 The way your routes are determined are through these Destination cards which you select from three cards you’re dealt. You get more or less points for each completed route depending on the length and difficulty of the route. 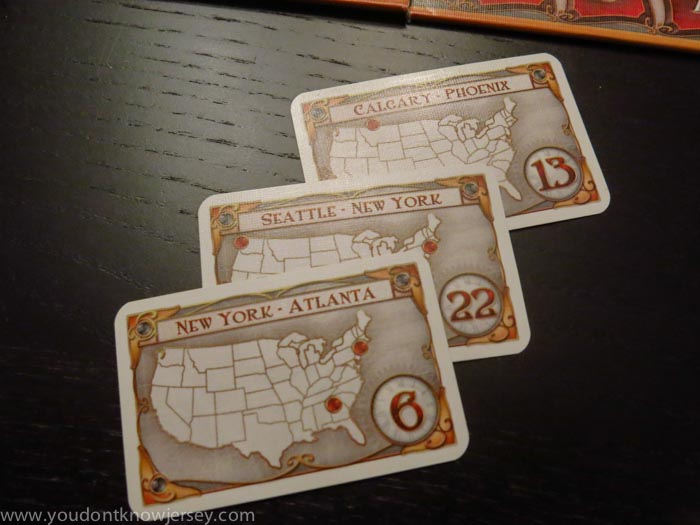 Points are also given as you claim sets of track along the way. The longer the tracks, the more points you get. You can see below that a set of six trains is worth 15 points while one train length is just worth one. 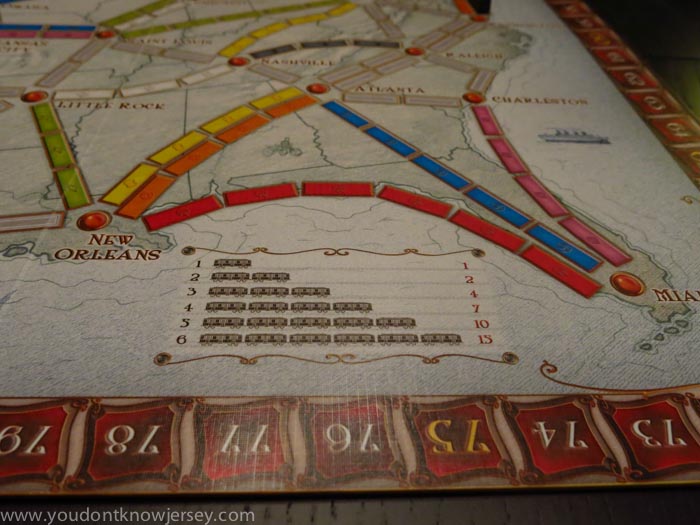 The game is ultimately decided on points. When the first player to have only two trains left to place announces they are at that point, each player gets one more turn to try and get points or complete a route. Points are kept track of around the edge of the board with tokens the color of your trains. 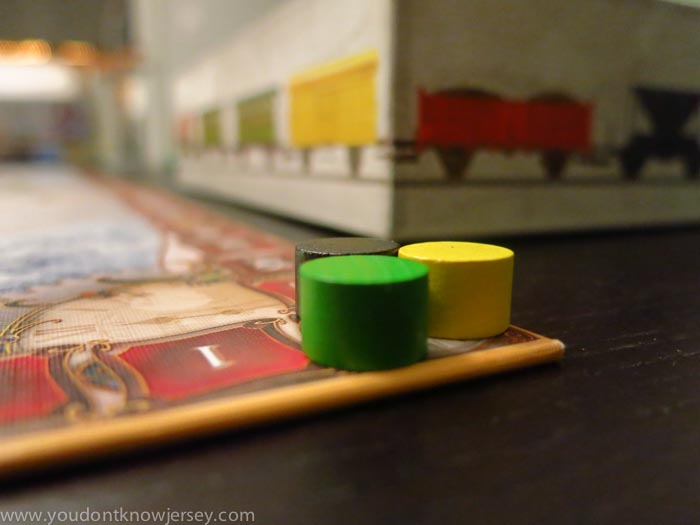 A completed board has trains running all over the board and the longest overall train even gets a ten-point bonus. 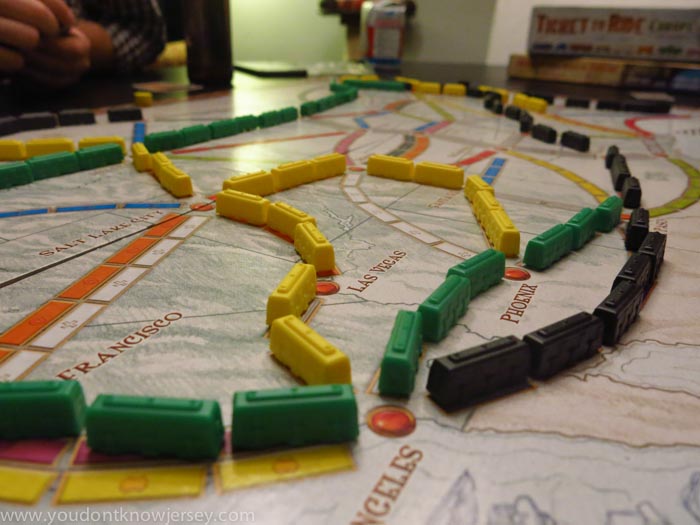 There are many expansion packs with different countries or continents as maps for your trains. We own Ticket to Ride India (with a bonus map of Switzerland on the opposite side) which has a special “Grand Tour of India” bonus. 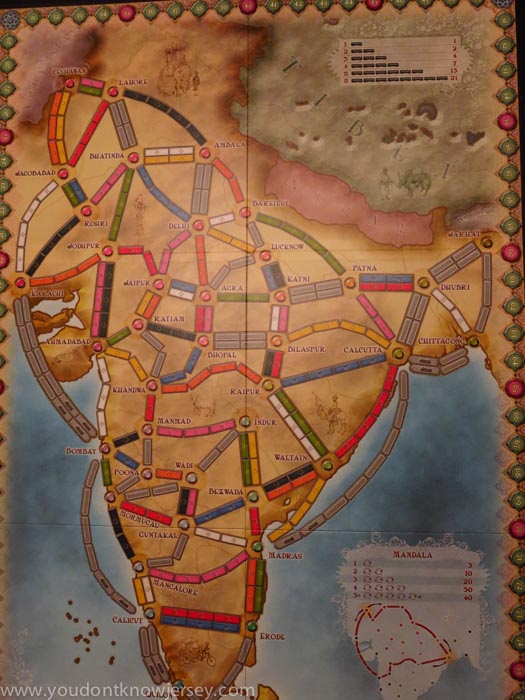 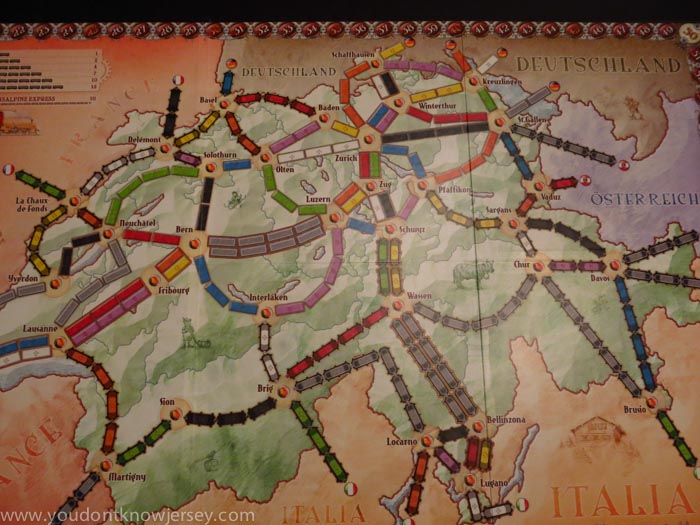 And, we own Ticket to Ride Europe that adds train stations and special rules for tunnels through the mountains.  I love that each expansion pack has special rules and isn’t just another map. 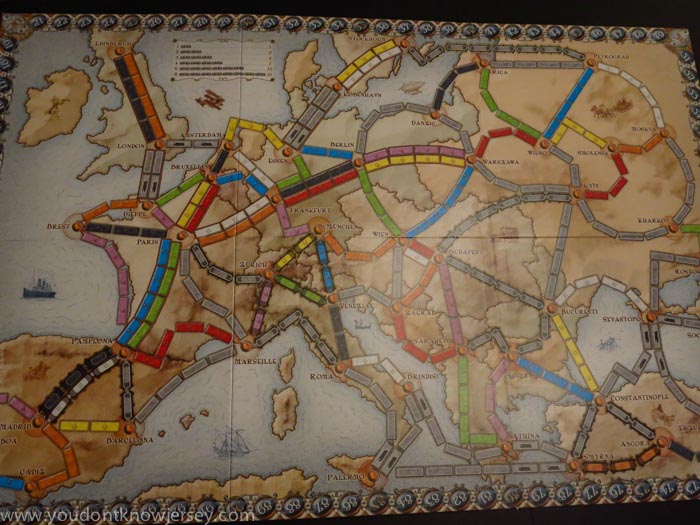 Other expansion packs are: Team Asia, designed for 4 or 6 players, and the Legendary Asia map for 2-5 players where traversing the Himalayan passes will cost you dearly; Ticket to Ride Heart of Africa explores the heart of the continent with Terrain cards that can double the value of train routes; and Ticket to Ride Nederland introduces a cost for some of the rail routes, which you’ll pay for with Bridge Toll Tokens to the bank… or to another player! There are even more packs that add levels to games you already own: USA 1910 that includes three new ways to play; Europa 1912 featuring new Destination Tickets that enable 3 new variants to Ticket to Ride Europe plus Warehouses and Depots; Dice Expansion which is compatible with any board map of Ticket to Ride where rather than drawing and collecting train cards, you roll five custom train dice each turn; and, an Alvin & Dexter set where two wacky monsters help stomp opponents and zap tickets in this fun expansion for any Ticket to Ride board game.

Check out all our pictures below from Ticket to Ride on our game night and plan a game night of your own with family and friends soon for Game Night in New Jersey! 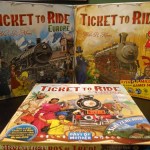 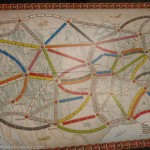 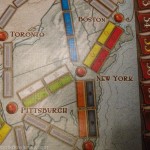 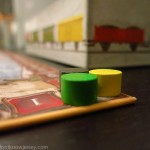 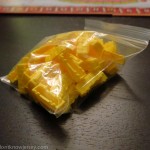 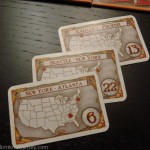 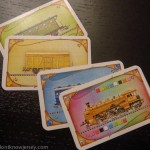 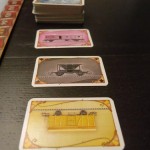 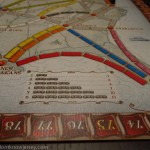 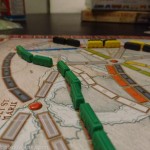 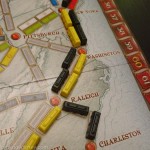 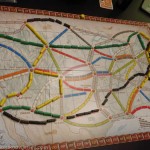 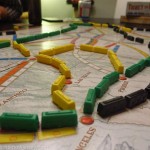 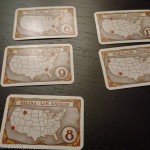 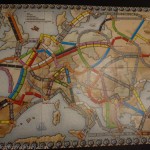 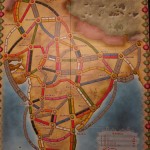 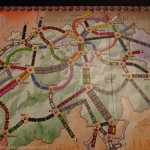 Pin It
Previous post:
Speak Into My Good Eye Gears Up For Second Annual 24 Hour Songwriting Challange Next Post:
Things to do in Jersey – September 4 5 6 2015