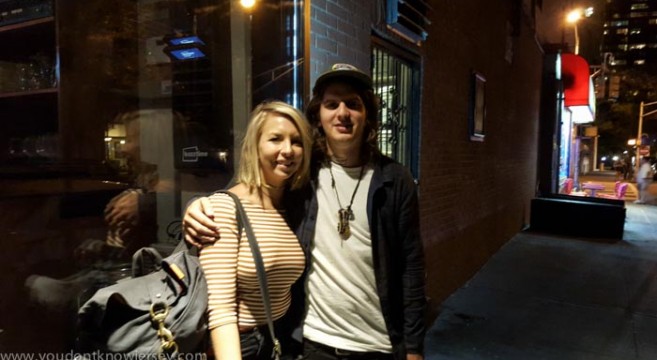 You may recognize the style. The seemingly clean and minimalist—yet at the same time complex—pencil and watercolor drawings. Graphical and instantly recognizable, it’s The Front Bottoms music perfectly represented in the visual format courtesy of artist Jennifer Palomaa.

The two young men with purple expressive faces on the self titled album. 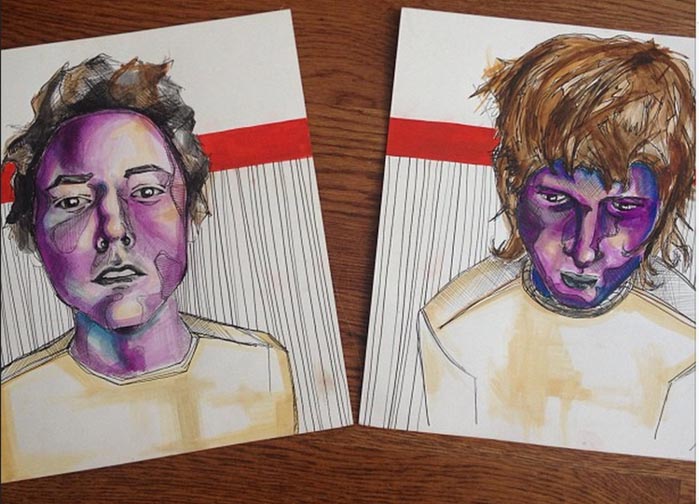 The lone knife of Talon of the Hawk.

A grandmother on Rose. 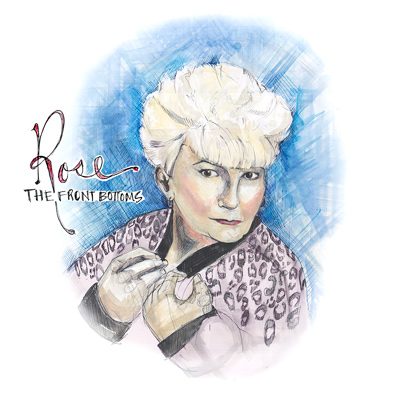 On the new record the, er, um, what exactly is that? We’re not telling. 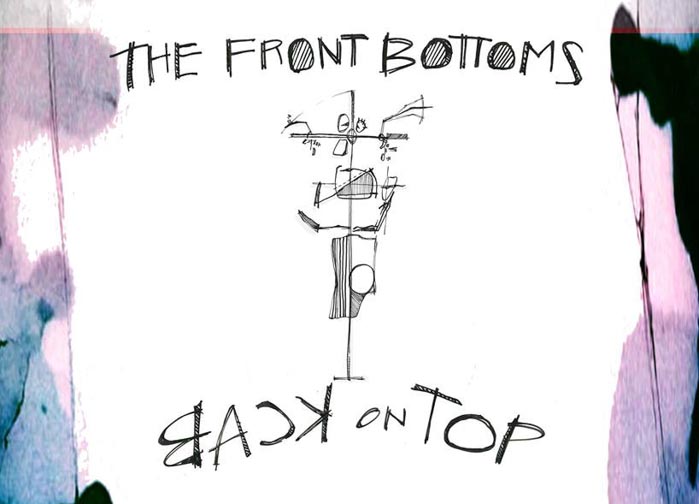 Palomaa, a native of Montvale, has known the band for almost a decade and it is that friendship that led to her work with the band beginning with their self-titled debut album. The drawings of singer/guitarist Brian Sella and the drummer Mat Uychich in deep purple are quite striking. The stark, sharp lines and emotional coloring in the artwork perfectly reflect the music that the album contains so much that the artwork became ubiquitous with the band. Whenever I listen to the record, I can’t help but think of the album art.

It worked so well for the self-titled album that for the band’s follow-up, Talon of the Hawk, the band would turn to Palomaa again and a partnership was born. Since then she has also designed their Rose EP and the newly released Back on Top along with all the corresponding liner notes, gatefold illustrations, stage backdrops and even band tattoos. For the new record the band wanted her to create something that on first appearance you may not be able to figure out. Once you do there is that “ahh, of course” moment.  Do you see it yet up there?

Palomaa grew up with art around the house so she took to it fairly early. She went to Pratt Institute in Brooklyn where she graduated with a BFA in Interior Design. She is putting that degree into action as a junior designer at the design firm D’Aquino Monaco.

We recently sat down with Jennifer and Mat to discuss her work. Some of her other art pieces are scattered throughout the Q&A, too.

When did you first become interested in art? Was it around the house as a kid?

My dad was a painter so he had me painting a lot with Bob Ross on Saturday mornings. He’d always try to correct me and get super technical about it. I’d get really mad at him because I just wanted to do my own thing. But, every since I could hold a pencil I can remember drawing or painting. 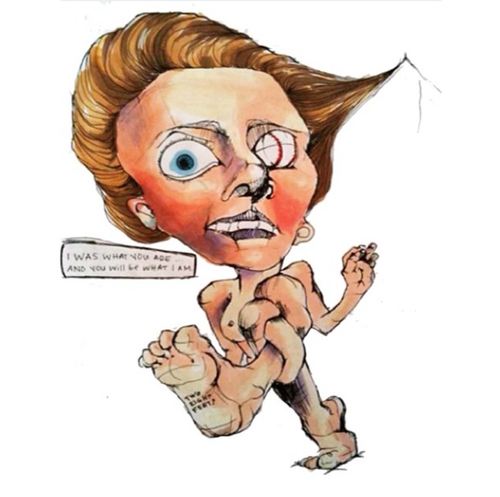 You create illustrations, sculpture and photography (according to your website) among others. Do you have a favorite medium?

I had four majors. I started as a drawing major, switched to painting and then illustration and moved to interior design. I dabbled in photography in my personal time but I didn’t study it.

I think oil painting will always have my heart but I couldn’t really find a way to make a career out of it. So, I took all the skills that Pratt gave me and applied it to an art career based in interior design and architecture. 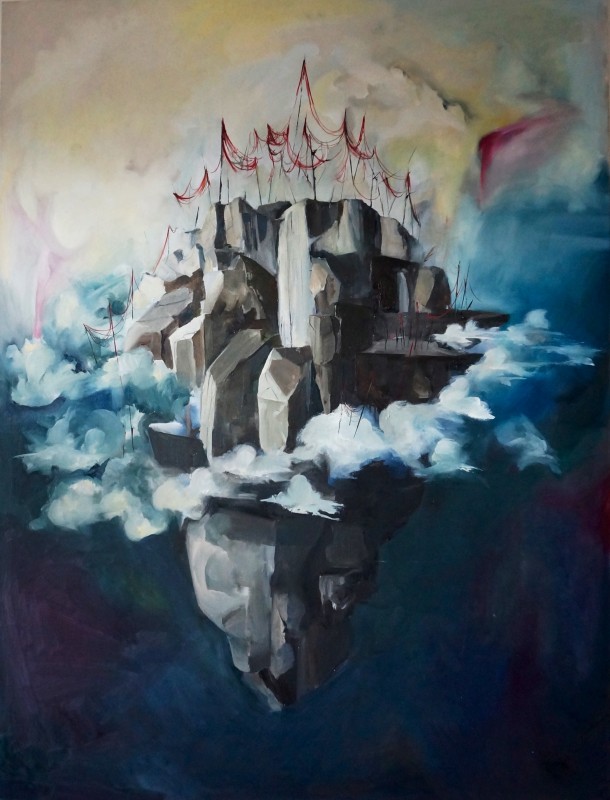 Is there a medium you have worked in yet that you would like to try?

I would like to work more on sculpture. I did some sculpture in my 3D classes in my freshman year but nothing beyond that. 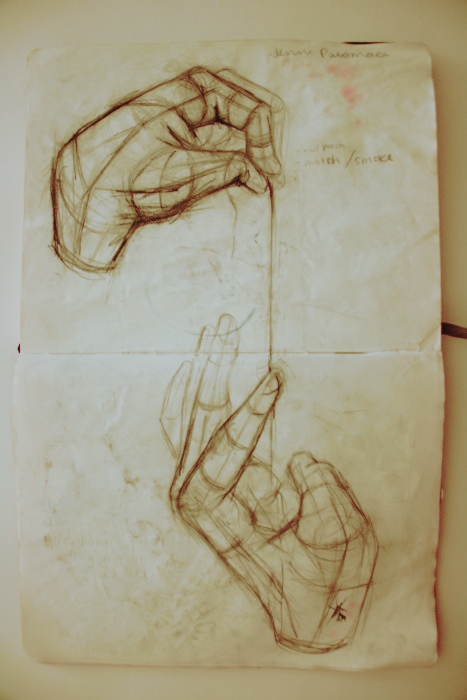 Your website says you are doing prop designs for an upcoming film. Can you tell us a little about that?

Last year at this time I was hired to work on the new Amy Poehler and Tina Fey movie called Sisters. I had to make some props that included old childhood journals. I had to channel my inner teen angst. So, I went back to all my old diaries and stuff. It was fun and it was something I was super interested in. It comes out in January. The trailer is out now.

How did you get started doing the album artwork for The Front Bottoms?

I’ve known Mat for almost ten years and for the self-titled one we went through my old sketch books and found a very basic version of what that album is. He asked if I could draw his portrait and Sella’s portrait in that style. There’s actually an earlier one before the self-titled one that absolutely no one’s ever seen. It’s a portrait of Sella, Mat and Mat’s brother, Brian, in it. It has an orange background and has a similar style.

What is the process normally? Do they give you an idea to work with and you go from there?

[Mat] We usually come up with an idea and tell Jenni and then I usually sit over her shoulder. (laughing)

[Jennifer] There has been a time where I work and then send them stuff but it always works out better when I go to them and we work together. It’s much more collaborative.

Your album artwork for The Front Bottoms has a common style throughout with a lot of white space. How would you describe your style?

I think album covers are very hard because they have to be very graphic. It has to be something that’s very well-recognized from a distance, on your phone, or something really big. It has to be simple and that’s where I think the white space comes in. It’s trying to balance out the chaos. 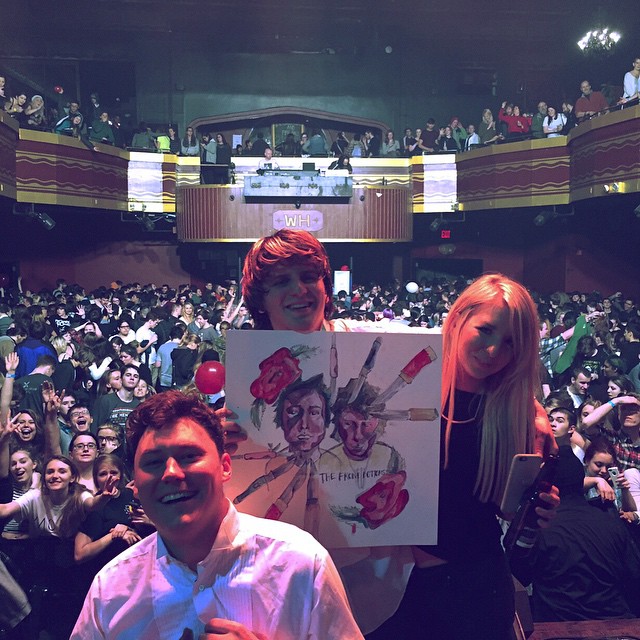 What was it like painting onstage at their Champagne Jam last December?

[Jennifer] That was one of the best nights of my life! I don’t know how they do that every night. It was so intense. I was up there painting and trying not to sing along as I know every word. It was just fun.

[Mat] The painting was raffled off and the money went to charity. There’s a really sweet picture of Jenni holding up the picture in front of the crowd.