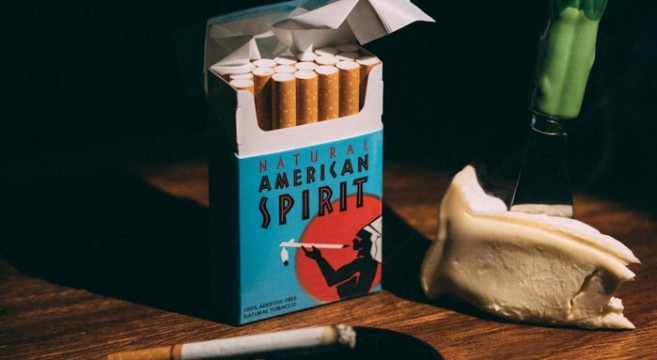 Jim Testa is the venerable founder and editor of the long-running and respected zine/website Jersey Beat. His local coverage of punk rock, hardcore and alternative in the area is second to none and his esteemed reputation is well-deserved. In an age of mass publicity e-mails and music blogs that publish everything chasing traffic, Testa and the writers of Jersey Beat have remained intelligent and critical.

What people might not know is that Testa is also a singer and guitarist. His excellent new EP American Spirits & Artisanal Cheese is out today and it is a folk punk album that is not afraid to take on hipsters, religion, Chris Christie and Donald Trump. Testa has never pulled any punches and he sure doesn’t start here. I wouldn’t expect or want him to. This is his first studio album since 2004 and it was recorded at Mama Coco’s Funky Kitchen in Brooklyn. It sounds fantastic thanks to producer and engineer Oliver Ignatius. 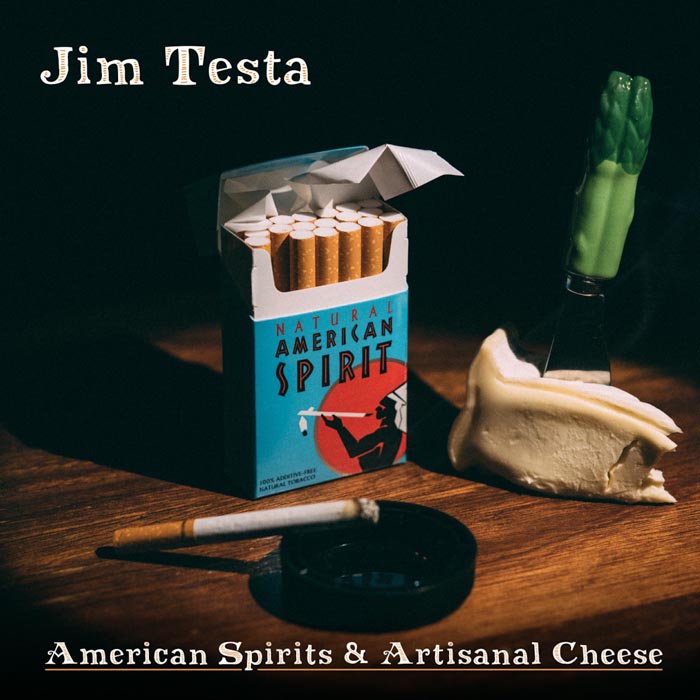 Opener “No Punk Rock in Bushwick” gets right into it with a take down of hipsters and their lifestyle in the gentrified neighborhood of Brooklyn. Testa sings of the cigarettes and cheese in the title and of “neck tattoos and a trust fund check.” The music sounds a bit like Dylan with some great acoustic guitar and piano. I especially love the line “playing what Pitchfork wants you to hear.” That gets a 10. Not all is lost though. At least there is Aviv and Shea Stadium. Religion doesn’t get a pass here either. The folksy “I’d Like To Be A Christian” examines the fact that some of the most deeply religious people often do not act very Christian.

“Here’s to The State of New Jersey” goes right for Chris Christie from the start. After all New Jersey is “where bridges are the playthings of the powerful and vain.” The reference is of course the Bridgegate scandal of September 2013 where many lanes of the George Washington Bridge were allegedly closed by order of Christie for retribution against Fort Lee’s Mayor Mark Sokolich. Other state mainstays like the Garden State Parkway, New Jersey Turnpike, Springsteen, suburbs and taxes all get a mention. An update on “Here’s to the State of Mississippi” by Phil Ochs, I dare you to try not to chuckle at a few all too truthful lines here.

“St. Marks Place” laments the changes that the famous East Village street has gone through. Where “Joey Ramone died for our sins and all we get is frozen yogurt.” The cultural flavors of knishes and falafels replaced with generic offerings. The decline of the edgier and grittier elements of a beloved locale is not always welcome. A touch of nostalgia is felt for Hoboken native Ol’ Blue Eyes in the slower paced “Sinatra On The Stereo.” There’s a gorgeous viola throughout this one. The EP closes with the two and a half minute punk evisceration of  Donald Trump in “(Mr. Trump) You’re Fired.” Never one to shy away from political discourse, Testa certainly doesn’t hold back here. Testa sings “we know you don’t like Mexicans, women, or the gays, you’re not just a Conservative, you’re back in the Stone Age.”

I really enjoyed listening to American Spirits & Artisanal Cheese. There is acute social commentary here but it is not presented in a heavy-handed way. There is a definite sense of humor and playfulness here that works very well with the serious material. I found myself actually laughing out loud a few times. Sometimes that is the best way to get people to think.

The EP is available over at Jim Testa’s Bandcamp page.