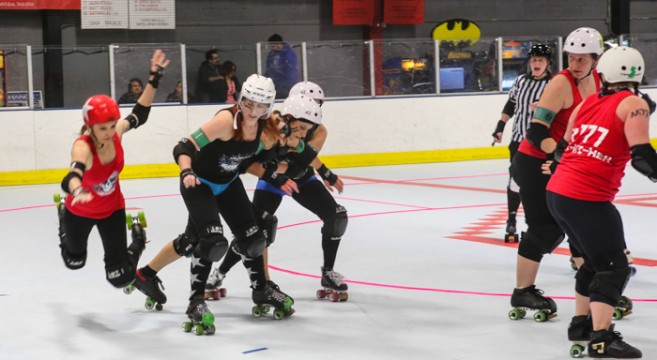 Saturday, March 19th, at In The West in New Brunswick

Two old time New Brunswick heads return to the Health Care City for an evening of comedy and music. Mikey Erg (solo work, The Ergs!, Worriers, The Unlovables, and many more bands) and Chris Gethard (The Chris Gethard Show, Broad City, Inside Amy Schumer, Parks and Recreation) head to In The West for one night only!

Mikey will be playing music that makes you dance but also gives you the feels. Gethard will be performing Career Suicide, his new hour long stand up show about suicide, depression, and alcoholism. Not surprisingly to anyone reading this, much of said show is stories of things that happened in New Brunswick.

This show will also feature comedy from Chelsea Moroski! Send a message to the In The West Facebook page for exact location details!

The Garden State Rollergirls kick off the 2016 Travel Team season with a bout between the Ironbound Maidens and PRD’s Independence Dolls. Located at Inline Skate Club of America, 170 Schuyler Ave., North Arlington. Doors open at 7:15, first whistle at 8:00.

dollys is celebrating the release of “Low Year” via Sniffling Indie Kids in New Brunswick. The full-length album is a cd compilation of the 10 singles that destroyed minds throughout 2015. Message any of the bands for the address. $5 for 5 acts, BYOB.

Jim Testa celebrates the release of his Mama Coco’s produced new EP “American Spirits & Artisanal Cheese” with this guests The Regrets, Jim Testa & The Unholy Rollers, Goodman and Logan X. $5 donation at door, comes with a free download of the EP.

Happy Mondays Presents: The Turnbucklers, Fortune Yeller and Wolfasaurus Rex!
Monday, March 21st, 8:00pm at the Wonder Bar in Asbury Park
Happy Mondays has killer line ups every single week. New bands, touring bands and of course some of our local favorites. Best of all, it’s free every Happy Monday! 21 and up, $2 PBRs, $3 shots of whiskey and bar food specials.