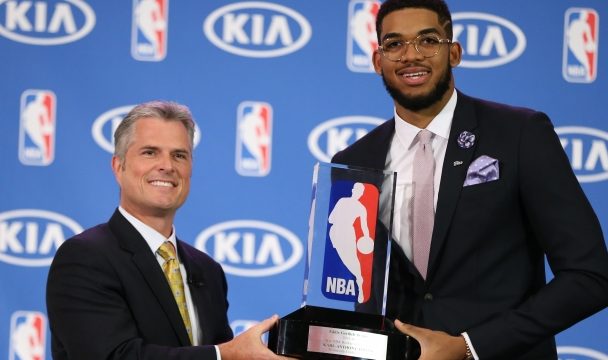 The Minnesota Timberwolves must have known that they were getting a great player when they picked Karl-Anthony Towns first overall in last year’s NBA draft.  All year, his rookie-season play was already being called the best throughout the NBA. U.S. and Canada sportswriters and broadcasters made it official on Monday when they unanimously voted him Rookie of the Year. He’s the fifth player to receive the unanimous vote.  The others were Ralph Sampson (1983-84 season), David Robinson (1989-90), Blake Griffin (2010-11) and Damian Lillard (2012-13).

Towns was born in Piscataway to Karl Towns, Sr. and Jacqueline Cruz. He attended Lake Nelson Seventh-Day Adventist School, Our Lady of Fatima School and Theodore Schor Middle School. At Theodore Schor, he repeated seventh grade in order to gain an extra year of development. Towns’s father played basketball for Monmouth University and coached basketball at Piscataway Technical High School, where the precocious Karl-Anthony practiced with the junior varsity team as a fifth grader.

As a freshman at St. Joseph High School, Towns led the basketball team to a state championship in 2012, earning himself the top position in the ESPN 25 national ranking of high school players. Towns also led his team to state titles in 2013 and 2014. Towns was selected at the age of 16 to play on the Dominican Republic national basketball team, which represents that nation in international competition. Towns was eligible based on the fact that his mother is from the Dominican Republic.

In December 2012, Towns announced that he was going to reclassify as a senior and commit to play on the Kentucky Wildcats men’s basketball team under Coach John Calipari, who had coached him as part of the national team of the Dominican Republic. He graduated with a 3.96 GPA on a 4.5 scale. He was named the 2014 Gatorade Player of the Year.

Towns only played at Kentucky for one year and declared himself eligible for the NBA draft at the end of his freshman year. The Minnesota Timberwolves snatched him up first in the draft and he earned that first pick over and over again this year.

Congratulations to Karl-Anthony Towns. New Jersey is proud of you!

Pin It
Previous post:
Things to do in Jersey – May 20 21 22 Next Post:
Paper Streets Release New Single ‘Once More With Feeling’