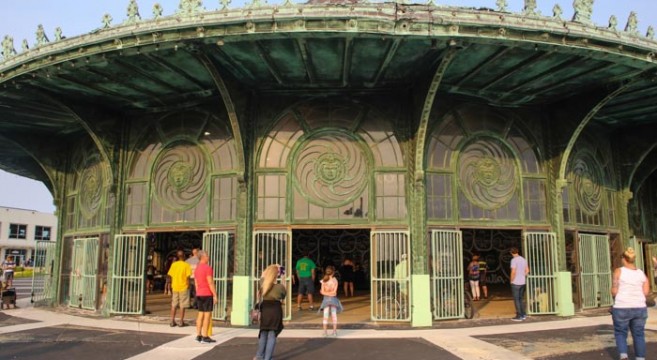 Music in the Carousel House is back!  Join us as great bands once again fill the Historic Carousel House in Asbury Park with sound tomorrow evening, June 17th. For free. Scheduling issues may prohibit other shows this summer so this could be your last chance to enjoy this cool space with Cool Dad Music and Little Dickman Records.

Last year’s lineups were amazing and the old building provided an incredible listening experience. With the ultra-cool backdrop mural by New York City based artist Harif Guzman (aka Haculla), folks were treated to great sets by bands like Overlake, Wreaths, YJY and The Battery Electric. 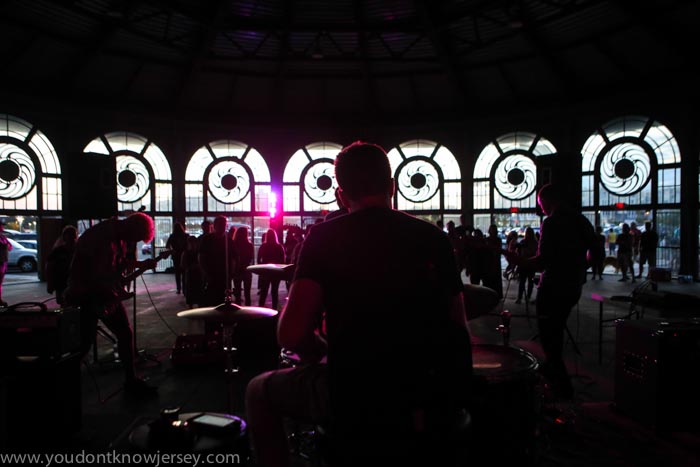 This Friday, the Carousel will rock with more wonderful local artists. The always exciting and creative Roy Orbitron from Bordentown, the incredible alternative folk of Lowlight, and Brooklyn-based rockers Looms.

The show is presented by the music website Cool Dad Music and Asbury Park based record label Little Dickman Records. These great folks do so much for the Asbury Park music scene it is hard to exaggerate. The fact that they have kept these shows free is testament to their drive. 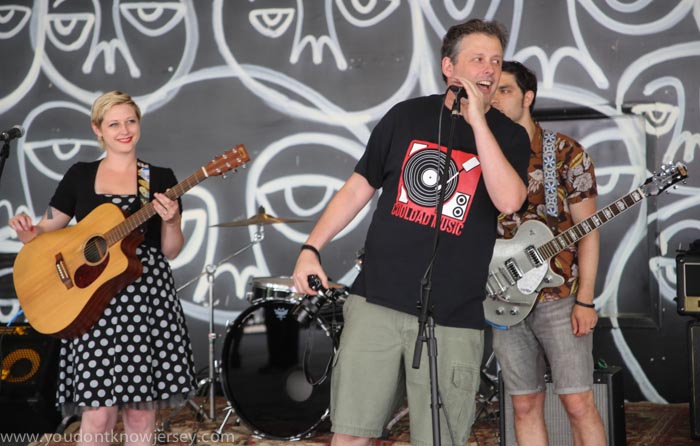 Cool Dad at the mic!

Co-organizer and Cool Dad himself Jim Appio answered some questions for us about this series of concerts in the carousel building:

How did you get involved in setting up the shows at the carousel last year?

Chris Yaniak and Amy Earixson of Little Dickman Records had been talking about wanting to get something outdoors and all-ages going for a while. I think we simultaneously thought of the carousel as just this amazing, iconic spot where it would be great to have shows. Chris took it to his contacts at Madison Marquette (who operate all of the buildings on the boardwalk like The Carousel, Convention Hall, and The Paramount) and with maybe a week to go before the first show, they gave us the ok.

Little Dickman and I reached out to various bands that we knew to put together the lineups for the shows. It was a real collaborative effort, but if Little Dickman hadn’t kept bugging Madison Marquette, I’m not sure if it would have happened.

What were the reactions of the bands that got to play in the historic landmark?

I think every band thought it was amazing. Someone even called it “magical.” We’ve been fielding requests from bands who want to play in the carousel house ever since the first show was announced.

The carousel house in Asbury Park is one of the symbols of the Jersey Shore; and, as incredible as it is to see a show there, I can only imagine how fun it must be to play.

What were some of the challenges putting on shows here?

I think the biggest challenge has been just not knowing how many shows we’d be able to do or when we’d have the opportunity to put anything on. There is a lot going on in Asbury Park, and the powers that be have given us a lot of support; but things change quickly. Every time we do one of these could be the last time. I think that whole “pop up” feel of these shows, though, is one of the things that makes them great.

I guess another challenge is that these are totally DIY which means running around to find someone to do sound or setting up and breaking things down ourselves. Again, though, that’s part of the charm.

What would you say was the biggest success from last year?

Given what I described above — the uncertainty around the shows, the DIY nature and my own lack of experience with that sort of thing — it was just amazing to me how smoothly every show ran. We started on time and never went past our curfew. That was because of the professionalism of Chris, Amy, our sound guys Jim Norton and Will Avon, and all the bands.

That made it easy for people to come through and just enjoy the music on some beautiful summer days. The people who did come through got to see great local bands like Dentist, Wreaths, and The Battery Electric and were introduced to some great out of towners in The Everymen, Overlake, Lost Boy ?, Sharkmuffin, BOYTOY, and YJY. Since then, we’ve seen several of those out of town bands come back to Asbury following such a warm welcome last summer.

This new show is the first of this year. Might there be more?

Like I said, every one of these shows could be the last one. We have no other carousel shows on the calendar as of this moment, and I’ve read about several interesting things that could be happening in that space over the summer that don’t involve us.

That said, Friday’s show is going to be a great one. Lowlight have just been relentlessly tearing things up around the area for a while now. Roy Orbitron put out one of my favorite records of 2016 early this year. And Looms bring some great musicianship and an eclectic set of influences to their first-ever Asbury Park show.

You won’t want to miss this one. It’s Friday, June 17th, at 7pm, and it could really and truly be your last chance to catch one of our shows in this great space.