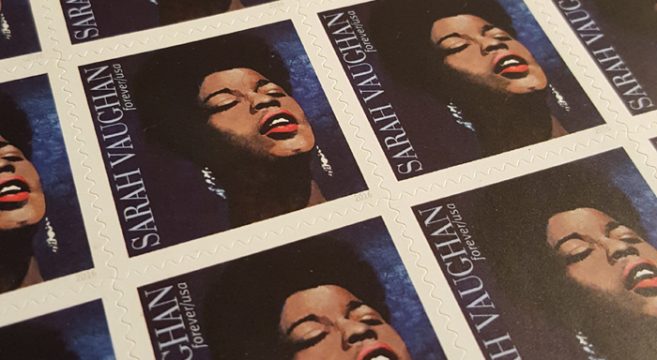 As part of their Music Icons collection of Forever Stamps, the United States Post Office has made these gorgeous Sarah Vaughn stamps.  They were released on March 29th this year and we finally found them in Montclair this week. 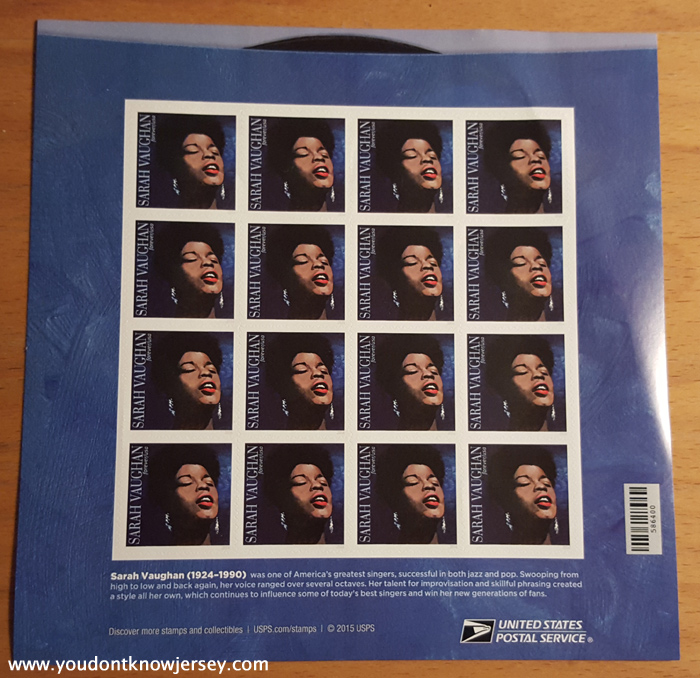 I love that the full sheet of stamps looks like the sleeve of a 45 record. That’s a nice trip down memory lane for this 80’s girl.

Sarah Vaughn was born in Newark on March 27, 1924. Sarah Vaughan’s father, Asbury “Jake” Vaughan, was a carpenter by trade and played guitar and piano. Her mother, Ada Vaughan, was a laundress and sang in the church choir. Jake and Ada Vaughan had migrated to Newark from Virginia during the First World War. Sarah was their only biological child, although in the 1960s they adopted Donna, the child of a woman who traveled on the road with Sarah Vaughan.

The Vaughans lived in a house on Brunswick Street in Newark for Sarah’s entire childhood. Jake Vaughan was deeply religious and the family was very active in the New Mount Zion Baptist Church at 186 Thomas Street. Sarah began piano lessons at the age of seven, sang in the church choir and occasionally played piano for rehearsals and services.

Vaughan developed an early love for popular music on records and the radio. In the 1930s, Newark had a very active live music scene and Vaughan frequently saw local and touring bands that played in the city at venues like the Montgomery Street Skating Rink. By her mid-teens, Vaughan began venturing (illegally) into Newark’s night clubs and performing as a pianist and, occasionally, singer, at venues including the Piccadilly Club and the Newark Airport USO.

Vaughan initially attended Newark’s East Side High School, later transferring to Newark Arts High School, which had opened in 1931 as the United States’ first arts “magnet” high school. However, her nocturnal adventures as a performer began to overwhelm her academic pursuits and Vaughan dropped out of high school during her junior year to concentrate more fully on music. Around this time, Vaughan and her friends began venturing across the Hudson River into New York City to hear big bands at the Apollo Theater in Harlem.

The rest is music history and now we can enjoy her memory and celebrate this great New Jersey native by buying these lovely stamps.  Go ask for them at your post office!