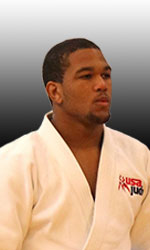 Colton attended San Jose State University and was NCAA champion three times there. He then went on to become 2015 Pan-Am champion. He qualified for Rio by taking the last available spot.  He was ranked 22nd and only 22 athletes make the team.

Brown began his career in judo following an injury suffered in another sport. After breaking his leg while playing football when he was only eight years old, Brown dropped out of all sports. After the pressuring of his father, Colton Brown was placed into judo, and he began to fall in love. He learned from Yoshiada Yonezuka, a two-time U.S. Olympic Team coach, who pushed him to train at Nihon University in Japan after graduating high school in order to take him to the next level. Yonezuka passed away in 2014, so Brown wants to be able to medal for him.

[photo via TeamUSA.org and bio info via DoubleGSports.com]