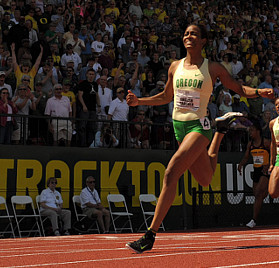 We’re highlighting all the New Jersey Olympians this summer because there are so many to watch for. English Gardner will compete for the United States in the Women’s 100m.

English Gardner specializes in the 100-meter dash. She was born in Willingboro but grew up in Voorhees Township and attended Eastern Regional High School.

Her personal best of 10.74 seconds, set in 2016 ranks her in the top ten all-time for the distance. She was a five-time NCAA champion with the Oregon Ducks track and field team, winning two 100 m titles, two 4×400 m titles, and an indoor 60 m dash title. Gardner turned pro after her junior season at Oregon and now trains in Los Angeles.

Gardner qualified for the 2015 World Championships in Athletics in Beijing after a runner up 100 m at the 2015 USA Outdoor Track and Field Championships. Gardner won the 100 meters at the 2016 United States Olympic Trials in a time of 10.74 (+1.0). In addition to qualifying her for the 2016 Olympics, the time tied Merlene Ottey as the seventh fastest competitor in history.

The Women’s 100m will begin on August 8th and medals will be awarded on August 13th.