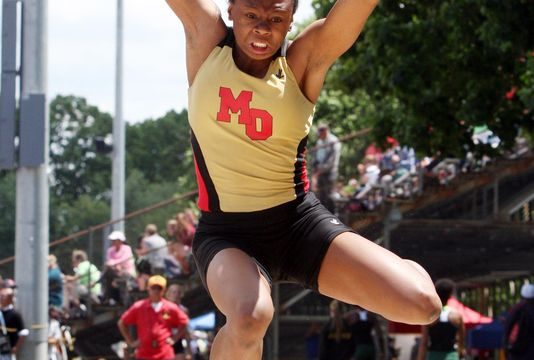 We’re highlighting all the New Jersey Olympians this summer because there are so many to watch for. Keturah Orji will represent the United States in the Triple Jump in Rio.  Two of the three women triple jumpers are from New Jersey. Keturah will joined by Morristown native Christina Epps in Rio.

Orji is a 2014 gradate of Mount Olive High School in Flanders. She had a high school personal best Triple Jump of 44 feet 11 inches. She has won the New Jersey Meet of Champions Triple Jump crown twice and set a New Jersey state record with a 42-6 1/2. She improved on the Morris County Long jump record of 20-2 in 2013. Keturah won 2013-2014 NJSIAA New Jersey girls Track and Field Gatorade Player of the Year awards.

Orji credits doing gymnastics when she was young for part of her early success. In 2010, Orji was a level 8 gymnast at Giant Gymnastics, Inc. in Hackettstown. At the 2010 New Jersey state championships, she performed the All-Around (Vault, Bars, Beam and Floor). Keturah wanted to become an Olympic gymnast as a youth but Triple Jump called her in another direction.

She’s now a sophomore at the University of Georgia where she was the Indoor and Outdoor Triple Jump SEC Champion.

[photo via dailyrecord.com and bio info via wikipedia.org]