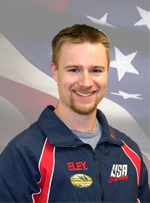 We’re highlighting all the New Jersey Olympians this summer because there are so many to watch for. Matt Emmons shoots the rifle for NJ and has been in three Olympic Games already.

Matt first began to shoot competitively in high school after Federal Bureau of Investigations firearms instructor Paul Adamowski invited him to give the sport a try. He quickly became passionate about shooting and learned that it would be an excellent way to earn scholarships for college.

While he tried his hand all three Olympic disciplines, it was rifle that kept his attention. In 1997, after a little over a year of shooting, one of Matt’s friends talked his father into allowing him to compete in an international shooting event. It was there that he was able to rise above the field and catch the eye of USA Shooting by winning both the prone and 3X40 events. Just one short year later when Matt, only 17 years old, won the prone competition at the National Championships and was named to the National Rifle Team.

Emmons married Czech sport shooter and Olympic champion Kateřina Kůrková in Pilsen, Czech Republic on June 30, 2007. They met at the 2004 Olympic Games in Athens when Kateřina came to console Matt after a gold medal blunder. They both live and train at the Colorado Springs, Colo. Olympic Training Center.

In Athens, he was very close to winning a historic double, but in the three positions competition, he accidentally cross-fired his last shot and finished eighth.

Emmons’s gold medal at the 2004 Summer Olympics in the prone position came while using a borrowed rifle. In April 2004, just prior to the Olympic Team Trials, Emmons discovered his rifle had been severely sabotaged in the supposedly secure locker room at the United States Olympic Training Center. The precisely tuned barrel and action were heavily damaged by what appeared to be a screwdriver. Emmons went to the 2004 Summer Olympics using his former University of Alaska Fairbanks teammate, Amber Darland’s, .22 rifle. He never found out who the saboteur was, but said “I’d like to know so I could shake their hand and say thanks.”

In the 2008 Summer Olympics, Emmons won the silver medal in the prone competition. He won the bronze medal at the 2012 London Olympic Games in Men’s Three-Position Rifle.

[photo via USAShooting.org and bio info via wikipedia.org and nj.com]

Pin It
Previous post:
The Porchistas Debut The Satirical “Ebolabama’ Just In Time Next Post:
Michelle Vittese, a NJ Olympian from Cherry Hill