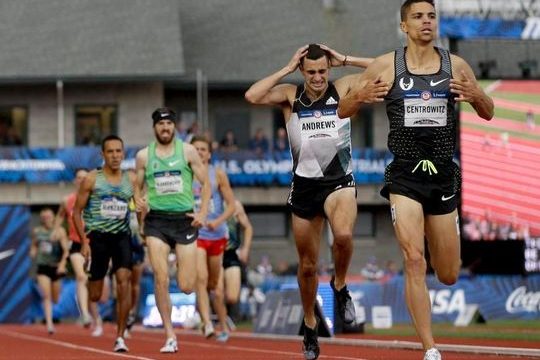 We’re highlighting all the New Jersey Olympians this summer because there are so many to watch for. Manalapan’s Robert Adrian Andrews is a middle distance runner, who specializes in the 800 and 1500 meters.  He’s representing the United States in the 1500m.

In 2009, Andrews set the U.S. high school indoor records for both the 800 m, at 1:49.21, and the 1000 m, at 2:22.28. At the 2010 World Junior Championships, Andrews won a bronze medal over 800 m, becoming (along with silver medalist Casimir Loxsom) the first American males to medal in a middle distance event at the world junior championships.
Andrews competed in the 2010 NCAA Outdoor Track and Field Championships his freshman year at the University of Virgina, placing second in the 800 m event. He won the 2011 NCAA Outdoor Track and Field Championship 800-meter race in the second fastest time ever run for an NCAA 800 Championship race, recording a personal best time of 1:44.71 to come from the back of the field and narrowly beat Charles Jock of UC Irvine (1:44.75).
Andrews left University of Virginia in 2012, his junior year, and signed a professional contract with Adidas through 2017. In 2013, he joined the New York New Jersey Track Club and coach Frank Gagliano while keeping Adidas sponsorship. However, after a period of time he decided to leave the New York New Jersey Track Club, favoring a return to his UVA coach Jason Vigilante.

[photo via APP.com/AP and bio info via wikipedia.org]