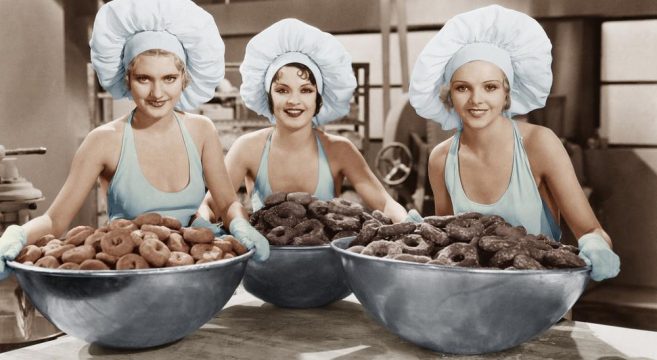 Alice has entered her Granny’s Haystacks so come on out and try lots of retro desserts for a good cause! Dust off grandma’s recipe cards and stock up on Jello & Marshmallow Fluff because the 1st Annual Montclair Bread Company Retro Bake-Off is here!!! Celebrate all-American classic desserts at the biggest community bake-off and bake sale Montclair has ever seen.

Want to know what 1961 tasted like? Stop by and try all the fabulous contest entries. There’s more – you can buy retro classic desserts made by Montclair Bread Company’s vintage recipe experts. All proceeds from this event will benefit Toni’s Kitchen.

Thomas Welsey Stern will be playing a set of our original and traditional American folk music in celebration of Independence Day (a little early). Free to public, bring a folding chair, as well as food/drink. BYOB is acceptable if you are seated at one of the two restaurants situated on the plaza. It’s gonna be a fun one, we got Jim Doyle on the horn!

This event has become a fun tradition for North Jersey families! Monday, July 4, 2016 Ringwood State Park will mark its 17th year holding the Independence Day event. The event features a dramatic delivery and reading of the Declaration of Independence on the steps of the Manor’s porch along with colonial activities and demonstrations. Revolutionary War reenactors from New Jersey Militia- Heard’s Brigade, the 35th Royal Sussex Regiment, the Friends of Long Pond Ironworks, and individual reenactors help celebrate the 240th anniversary of American independence and bring the experience to life.

The festivities will begin in front of Ringwood Manor at 1:00 p.m., when colonial era toys and games will be available for children to play with. Young and old can sign their “John Hancock” on a copy of the Declaration using a traditional quill pen and ink. Colonial crafters, demonstrations, and displays will help to create an atmosphere of a town square in front of Ringwood Manor.

The ceremony itself will begin at 2:00 p.m. with a short introduction about the history of the area and the Declaration of Independence. A lively debate among members of the crowd will break out, involving British soldiers, area Loyalists, and the supporters of the cause for independence, the colonial rebels. After the debate concludes, the local militia unit will form and muster up. Soon after, the Declaration will be delivered to the front steps of Ringwood Manor by a horse and rider. The document will then be read to the crowd at 2:30 p.m. Visitors are encouraged to listen closely and cheer and jeer during the reading.

Following the reading there will be a traditional flag raising. Again this year, the “Hopkinson” flag will be used for the event. Believed to be the first version of the new country’s flag, it was designed by and named after New Jersey’s own Francis Hopkinson. After the flag is raised, there will be a ceremonial musket volley and the bell at Ringwood Manor will be rung thirteen times to conclude the ceremony.
The public is encouraged to stay after the ceremony as the celebration continues. Children are encouraged to join the Continental Army and learn military drills. 18th century baked goods will be available to purchase from the Sugar Loaf Baking Company. Colonial dancing will take place in the back gardens with the North River Colonial Dance Company. Free watermelon slices are available to everyone who attends. All are welcome to join the fun!

There is no charge for the Independence Day celebration. There is, however, a parking fee to enter Ringwood State Park of $5 for in-state residents, and $7 for out-of-state residents. Ringwood Manor will be open to the public between 10am and 1:30pm only to allow for the event to proceed as scheduled. The entrance fee for Ringwood Manor is $3 for adults, $1 for children ages 6-12, and children 5 and under are free. The event will take place rain or shine. Independence Day at Ringwood Manor is sponsored by the North Jersey Highlands Historical Society and the Ringwood State Park staff. For information, call (973) 962-7031 ext. 0 or visit www.RingwoodManor.org.

Our album ‘United By Birdcalls’ turns 365 days old on 7/7. We will be celebrating by playing music and being with our friends. Some of those friends will also be playing music… ROMP happy pop-ish/punk jamz with emotionally driven lyrics that make you want to dance and sing loudly. good music and even better people! dollys harmonies, groovin bass lines, and catchy melodies! some of the most talented musicans in the NJ scene. ManDancing Raw honest folk songs accompanied by some very creative musicians. some of them have facial hair.