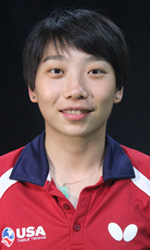 We’re highlighting all the New Jersey Olympians this summer because there are so many to watch for. Jennifer Wu is a table tennis player who recently became a U.S. citizen so she could represent the United States in Rio!

While she was growing up in China, Yue (as she was known then… she adopted the English name “Jennifer” when she moved here) was addicted to video games and began to have bad eyesight from watching the TV for so long.  Her mother suggested she take up table tennis to improve her eyesight.  Not only did it improve, she found that she had quite a talent for it.

Wu moved to Fort Lee in 2008 and became a citizen in 2014.  She practices as Spin, a table tennis club in Manhattan. Since she’s there so often she’s gotten to know celebrities who play there and even coaches Judah Friedlander.

Table tennis begins August 6th and medals are awarded on August 10th.  Jennifer could be the U.S.’s first shot at a table tennis medal so her matches are definitely “do-not-miss” events!

[photo and bio info via TeamUSA.org and newyork.cbslocal.com]