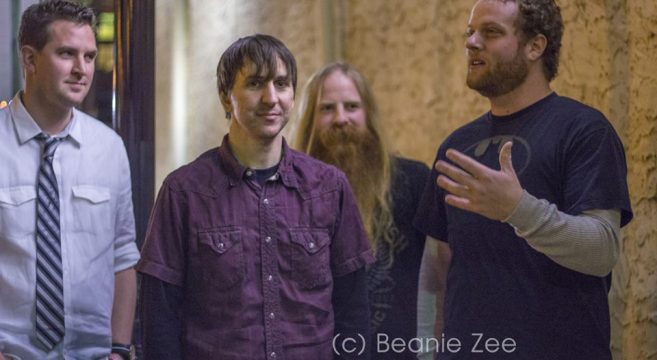 Summer is the only perfect season we have. Divided up neatly across three months, it is uniformly bright and warm; the only real inconsistency being exactly how warm things get. With it comes the optimism of June, the sun-soaked deliverance of July, and the melancholy farewell of August. To that end, followers of the music scene that continues to push ever-upward across the Trenton-Asbury-New Brunswick triangle hit pay dirt this year. We were brought into the season by Dentist’s spiky, tuneful Ceilings, led across the cracked terrain by Lowlight’s Where Do We Go From Here and now – if you let them – Small Planet Radio is here to drive us off into the August sunset with debut single, “Anywhere,” from their forthcoming (almost self-titled) album, Anywhere At All.

The song starts with bandleader Andrew Kolbenschlag’s steady rhythm guitar and Bill Lambusta’s insistent bass being pushed along by the Weinberg-esque 2-4 snare drum of Ed Dzienkiewicz as “Anywhere” makes its case as a quintessential New Jersey song. It all here: tattered flags, white t-shirts, a lover’s picture taped up on the fridge, and Kolbenschlag’s particularly lyrical brand of American slang as he sings of a home that’s “three days West of anywhere at all.” After a false stop, lead guitarist Tom O’Leary delivers the hook and it becomes clear: “Anywhere” is a trip worth taking. And if this first single is any indication, we’re in for quite the ride.

Anywhere At All will be released on September 10th, 2016. Small Planet Radio will be celebrating with a release show at The Court Tavern in New Brunswick alongside Collective Man, the Beatrix Potter Band, and Above the Moon. Doors open at 8pm.

Pin It
Previous post:
YJY Release Second Single “Through Being Hip” off Upcoming EP ‘The Same Noise’ Next Post:
A Visit to Jersey Spirits Distilling Company in Fairfield