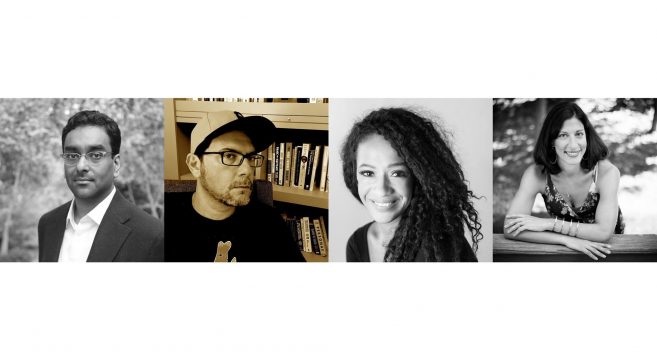 Halfway There Launching Second Season of Book Readings in Montclair

Halfway There, Montclair’s literary authors’ reading series, will launch its second season on this Monday, September 26th, at Red Eye Café. With Red Eye’s amazing coffee and book-buying courtesy of our favorite bookstore of all time, Watchung Booksellers, this is bound to be a terrific evening of authors, conversation and caffeinated beverages.

This first evening of the series will feature authors Mark deSilva, Ben Greenman, Rachael Eliza Griffiths, and Sara Weiss. Doors open at 6:30 for coffee and book buying. Readings will begin at 7pm followed by an audience Q&A. Check out Halfway There’s Facebook page to read more about this Monday’s authors. The 2016-2017 season will continue on January 9, April 3 and June 5.

Halfway There is a quarterly event that brings together established and emerging voices, as well as local and visiting writers of fiction, nonfiction, and poetry. Founded a year ago by area local and writer Apryl Lee and writer and NJ native Nicole Haroutunian, the series has proven to be an exciting addition to Montclair’s vibrant artistic community. In the first year, Halfway There hosted a diverse range of writers at four events, bringing in a standing-room-only house to the Red Eye Café. In addition, a special “pop-up” reading took place at The Montclair Art Museum to showcase six local, emerging authors in conjunction with National Poetry Month. The enthusiasm and support of the community has been fantastic.

We got to ask Mark deSilva, one of the authors reading on Monday, a few questions about his book and his process. Mark is the author of the debut novel Square Wave, which was released by Two Dollar Radio in February 2016. He holds degrees in philosophy from Brown (AB) and Cambridge (PhD). After several years on the editorial staff of the New York Times’ opinion pages, he now freelances for the paper’s Sunday magazine, while also serving as a contributing editor for 3:AM Magazine.

Square Wave is your debut novel but your resume suggests that you’ve been a writer for quite a few years. What challenges did you face writing a novel that you hadn’t experienced before in your other writing?

Well, my other book-length work is a doctoral dissertation in philosophy. The nice thing about dissertation writing is that there is an academic literature to which you are responding, so there is a roadmap handy when you begin writing. Though you may not know precisely where you’ll end up, you do have a sense of the territory you’ll be traversing. Novels, though, are rarely direct responses to a specific literature, so where you’ll go is really not suggested in advance. You have near-total freedom, which can be intimidating, and occasionally paralyzing. But this same freedom also becomes the prime pleasure of fiction writing, once you get used to it. You aren’t answering to others, you’re speaking for yourself.

How did the idea for the book come about and what made you decide on setting it in the future while looking back at 17th century Sri Lanka?

In a funny way, I think of the book as fundamentally about the present. The essence of our own moment depends both on our presentiments of the future and on our grip on the past (and indeed, its grip on us). Being Sinhalese myself, I have a special interest in Sri Lankan history, you could say. More than that, though, I’m interested in its colonial history, and colonial history generally, since the world we now find ourselves in got much of its shape from civilizations colliding through the centuries.

What do you think makes a good story?

A story without tension isn’t much of a story, that much everyone seems to agree on. Dissonance stimulates the mind. But I think a story that doesn’t exceed us, confound us, in some way, also isn’t much of a story. The ones that last, the ones we keep returning to, are those that refuse to bow entirely to our capacities of understanding.

How do your two degrees in Philosophy influence your writing?

I think my fiction has pretty clear philosophical preoccupations–about identity, consciousness, language, aesthetics, and the social collective–that were partly formed (and certainly deepened) by the formal study of philosophy. The Anglo-American tradition I trained in placed a premium on clarity of expression at the sentence level. No gratuitous figurative language, for instance. I think I write sentences that hew to that dictum. Complexity of language, for me, should stem from the complexity of the ideas expressed rather than from mushy thinking or simply a play after pretty turns of phrases that actually say very little.

What do you like to do when you’re not writing?

I’ve been playing guitar, electric and acoustic, for many years. I used to prefer quite intricate material, but these days simple chord changes seem to do it for me. My late style, I guess, rock and roll being a very young man’s game.

Montclair is known to have quite a few New York Times staff members as residents. Have you been to the area before?

That’s certainly true of the Times’s op-ed department, where I used to work. In fact, my then boss, Andy Rosenthal, used to throw the department’s Christmas party at his home in Montclair.  Beautiful, airy neighborhood. So yes, I have been to the area a few times and couldn’t have a better impression of it.

My Book of the World.

Thank you, Mark. And, we’ll see you on Monday everybody!

Pin It
Previous post:
The Great NJ Albums: Bruce Springsteen – Nebraska Next Post:
Harder Than It’s Ever Been: Reviewing Kate Dressed Up by Kate Dressed Up