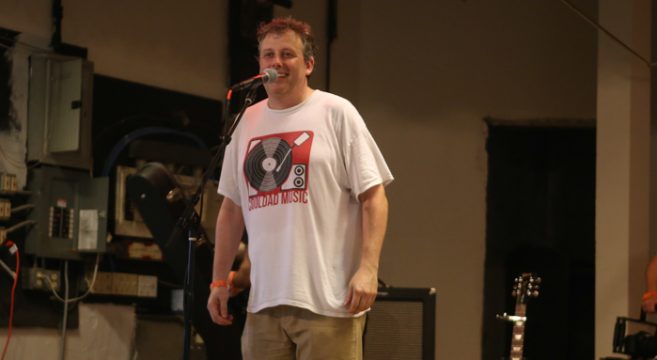 If you are a fan of the New Jersey music scene chances are you have seen Cool Dad (a.k.a. Jim Appio) at a show taking pictures, you’ve read a piece on a new local band he just wrote on his website Cool Dad Music, or you’ve attended a concert in Asbury Park that he helped organize. This month Cool Dad Music hit an impressive milestone and is celebrating its 5 year anniversary with a concert at The Overlook in Convention Hall in Asbury Park with Shellshag, Dollys, Smalltalk and The Rock N Roll High Fives. Believe me, running an independent website this long takes tons of dedication of which Appio seemingly has in endless supply and a celebration certainly seems in order.

Many bands owe a huge debt to Appio. Whether writing about a new band on the scene just starting out or reviewing a new release by an established local favorite he is a tireless promoter of all that makes New Jersey music so outstanding. He does all of his writing with an intelligence and humor that immediately engages the reader. Fans of local music also owe Appio a debt of gratitude as his weekly What’s Going On column lists all the weekends shows all across the state. The site should be bookmarked in your browser for that alone. 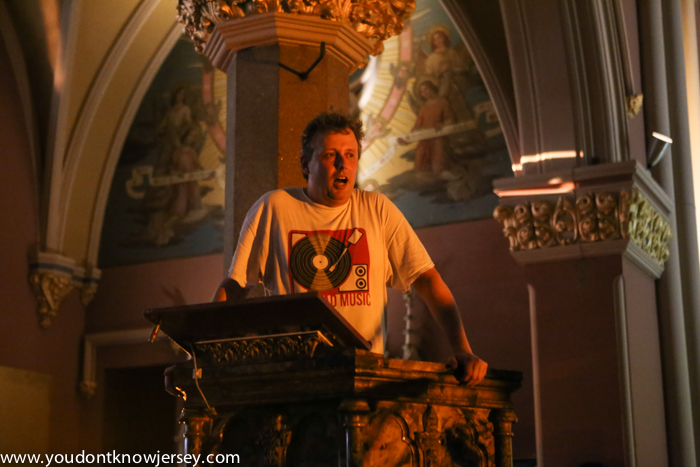 Then there is the photography. You can often find him right up front taking high quality pictures of bands in concert. He has endured quite a few bruises “getting the shot” but I am certain he would tell you it is worth it every time. He allows bands to use his pictures usually for just a credit. And good camera equipment does not come cheap. Add generosity to his list of traits.

He is a multiple Asbury Park Music Award winner but also one of the most affable people I know. Any time I’ve needed a photograph for an article or journalistic advice he has never hesitated to help. The rich music journalism we enjoy here in New Jersey is certainly enhanced because of the way Cool Dad covers it.

Next time you see him at a show, go up and say hi. He may just buy you a root beer.

Let’s s start at the beginning. What led to the creation of Cool Dad Music?

I like to tell this story about how, back in 2009, I bought tickets for the Pavement reunion at the Central Park Summer Stage a year in advance. I then spent the next 50+ Fridays tweeting out a Pavement or Pavement-related song with the hashtags #PavementFriday and #cooldad on my personal Twitter feed. That was kind of like the proto-CoolDad Music where I’d started forcing my musical opinions on other people.

Really, though, I would just share out music that I was into on social media all the time. I used the hashtag #cooldad as kind of a joke about how I was this middle-aged dad listening to all this new, “hip” music. Someone just said one day, “You should start a music blog.” I was really looking for something that provided a lot more challenge and fulfillment than my corporate job at the time, so that’s what I did.

What was your initial goal with the site?

You’re making a big assumption there — that I have things like “goals.” Seriously, though, my initial goal was just to have an outlet for getting some of my thoughts down about various things. Music was the catalyst; but if you look at the posts on the site, I often try to tie things back to my personal life or my own experiences. It’s still a blog, after all, and not a newspaper; so I try to have it be a little more than “this album is coming out on this date” or “so and so signed to this label,” though I do some of that too.

Someone once commented after reading an album review I wrote, which came from the perspective of the thoughts that ran through my head as I listened to the record during a day at the beach, “Was this an album review or an entry in your life journal?” My simple answer to that was, “Yes.”

As your name says you are a dad. How do you juggle fatherhood with the demands of running a website?

It’s worked out pretty well. I’m able to manage the site, write posts, etc. during the day while the kids are at school — like any other job. Most of the shows I attend happen during the evenings, of course, after I’ve already given the kids dinner and made sure they’ve done their homework. Stuff like that. On the occasions where there have been conflicts, CoolMom and my parents have been an incredible support system. And I do have to say that CoolMom supports me 100%, even during those times when I know that my heading out to shows is an inconvenience for her. She’s really done so much for whatever success the site has had and for allowing me to pursue something that gives me so much happiness.

All of that said, family still takes priority. Swim meets, school plays, chorus concerts, family celebrations, and family vacations, even just going out to dinner with CoolMom always get the nod over any show.

What do you think of the current indie music coming out of New Jersey?

I am legitimately amazed at the music that’s being produced in New Jersey. So many of the bands here deserve a wider audience. I try not to categorize my favorite bands from New Jersey as “great local band” or “favorite New Jersey band.” Many of them are just great bands. Period. Maybe someday, someone will crack the code of what it takes for a band to get the attention they deserve beyond their local scene.

I think we actually first met at Asbury Lanes. Such an iconic and important venue. What does Asbury Lanes mean to you?

There are lots of great venues in and around Asbury Park who have been very supportive of CoolDad Music, but Asbury Lanes was always special to me. I remember one evening, as I sat on the steps out front waiting for a show to start. Jenn Hampton came outside and sat next to me and said, “You can always come to any show here — ticket or no. I know you like to support us and the bands, but we like to support you, too.”

And they really did. I could set myself up wherever I wanted in that place to take pictures. They would allow me into sold-out shows. But it wasn’t just the logistical aspect of helping me do what I had to do as a blogger. There was a built-in community and family there at Asbury Lanes, and they let me — a relative newcomer — in as a part of it. That made a huge difference to me at a time when I was really trying to find my way. Jenn and the staff at Asbury Lanes, in a very real way, helped me discover who I was after 40+ years of trying to figure it out; and I will always be grateful.

With the absence of the Lanes and the corporate expansions going on how can Asbury Park remain a vital music community?

I think you hit on it with the word “community.” Even Asbury Lanes was a lot more than just a structure. It was a community of people who loved art and music. Most of those people are still around Asbury Park, plugging away.

The city deserves some success. If money from tourists and developers comes in to revitalize the city, that can be a good thing. But it’s the classic story of artists’ making something interesting, giving it “street cred,” and then monied interests coming in to capitalize on that and commoditizing lots of the “interesting stuff” in the process.

What I really hope is that the community of artists and labels and people who care about keeping things interesting keep working on finding new ways to get alternative voices out there. Keep trying to bring current, innovative acts into the existing spaces. Come up with creative ways to host shows outside of the usual spots. Keep supporting one another. We’ve seen some of that with bands throwing shows in new spaces or bringing friends they’ve made on tour into town. Little Dickman Records put on lots of shows featuring bands who have never played Asbury before. I wish I knew how to achieve the correct balance of financial success and a thriving counter-culture, but it’s pretty much an eternal question.

As well as your writing you are known for your concert photography, I am gonna put you on the spot. 3 bands you always love shooting in concert?

Ooh. I always find questions like this so tough. Do I really have to say only 3?

OK. I’ll start off with Screaming Females. They were one of the first bands I ever covered at CoolDad Music (before i was taking pictures); and over the last five years, in looking at the many, many shots I’ve taken of them, I can see my evolution as a concert photographer.

Same thing goes for Titus Andronicus — another of the bands I covered in my first-ever post. My shots of them have gone from ones I took with the little point and shoot I used to bring to shows to being used in a couple of newspaper stories about the band.

Finally, I’m going to cheat and ignore your limit of 3 by saying Dentist — the band I’ve probably shot more frequently than any other, The Battery Electric — who put on one of the best stage shows around and always provide good crowd shots, and dollys — because who doesn’t love shooting a band who place their drummer in the front?

What do you have planned for the next five years for Cool Dad Music?

What I will say is that I plan to keep on keeping on. I do want to start doing more multi-media content like video interviews or some more artist sessions. I’ve been working to expand my coverage beyond just the local Asbury scene, and I’ll keep doing that. Just to keep supporting music that I think deserves a wider audience and do what I can to help some of these great artists get heard.

I sometimes throw this out in interviews and given the anniversary it seems appropriate here. 5 words to describe Cool Dad Music.

Pin It
Previous post:
Picture(s) of the Week – The Many Cones of Iris Next Post:
Where’s YDKJ This Week? – March 17th–March 23rd