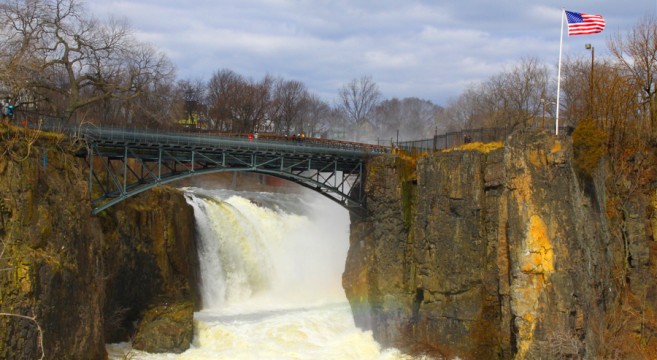 Batter up! City of Paterson Historic Preservation Commission is calling all baseball fans to come see America’s favorite pastime played according to 19th century rules and regulations. Both teams play following the rules established in 1864, use period baseball equipment, and wear typical 19th century baseball uniforms. On Saturday, July 1st, the New York Gothams will be playing the Brooklyn Atlantics, with the first pitch being tossed out at 11:00 am. Come cheer on your favorite team!  Both the New York Gothams and the Brooklyn Atlantics are non-profit organizations that demonstrate the historic origins of our national pastime all over the tri-state area. Besides the outstanding sportsmanship on the field, the teams and their personnel will explain how rules evolved and how they differ from today. You will see that all fielders do not use gloves. Instead, they play barehanded just as it was years ago!

The game will be played at Larry Doby Field within Eastside Park. There is no fee for the event and car parking is free and available within the park. Please be aware that the field has no bleachers for the public. Those coming to visit are advised to bring their own chairs or a blanket to sit on. Refreshments and hot dogs will be available to purchase at the field. Heavy rain will cancel the event.

The New Jersey Symphony Orchestra is coming for a full night of pure musical production in their home state of New Jersey. Visitors can set up blankets and chairs on the lawn to enjoy this spectacular show with friends and family along with food, drink and fireworks at the Festival Grounds. Admission to the concert is FREE.

All Proceeds will be donated towards keeping Montclair NJ’s Meatlocker ALIVE!!!

Visit the Paterson Great Falls National Historical Park to celebrate the 225th anniversary of the founding of the city of Paterson. Alexander Hamilton selected the site around the Great Passaic Falls as the location for his visionary project, the Society for Establishing Useful Manufactures (SUM). As a result, the city of Paterson, whose name Alexander Hamilton selected to honor the then-governor of New Jersey, was founded there. Learn more about the history of the falls and how Hamilton’s manufacturing vision for the United States was achieved at this site in the special July 4th commemoration. Cake will be served! See the All Places Hamilton page on Paterson Great Falls.  A reception will follow at the Paterson Museum.

Hey yall! Summer classes are almost upon us at the Jersey Art Exchange and we’re lookin a little light on instruments. We know everyone’s got a spare guitar or old keyboard lying around in a closet or basement somewhere so we’re inviting you and your unused gear to roll through and play some music!

$10 oooorrrr FREE WITH ANY OF THE FOLLOWNG ITEMS!  Here’s what we’re lookign for! Bear in mind they must be in working order and should have appropriate power cables:  Keyboards; Guitars; Basses; Drums (and other percussion); Amplifiers; Speakers (and other audio equipment including cables); Microphones

Take a tour of Boxwood Hall, home of Elias Boudinot (President of the Confederation Congress) and later Jonathan Dayton (Signer of the Constitution). The tour will focus on Alexander Hamilton’s time at the house in 1772-1773 when he had just emigrated from the Caribbean and was a preparatory student at the nearby Elizabethtown Academy. The house tour will also highlight Hamilton’s connections to Elias Boudinot and Jonathan Dayton. Additionally, there will be a pop-up exhibit of Hamilton portraits for this tour. Admission: Free

As a follow-up to last year’s sold-out “New Hamilton Discoveries” talk at Liberty Hall, new discoveries about Alexander Hamilton made over in the past year will be shared for the first time publically at Liberty Hall. Speakers include Hamilton National Scholar Michael E. Newton and Aimee Fernandez-Puente, Elizabeth Local History and Special Collections Manager at the Elizabeth Public Library. Don’t miss your chance to be the first audience to learn these discoveries! Due to popular demand, there will be two times to attend the talk that afternoon. The talk will also be live-streamed on the Liberty Hall Museum Facebook page.

Friday, July 7th from 10am to 8pm, The Snyder Academy, Elizabeth

The Snyder Academy, which sits on the site of the Elizabethtown Academy where Alexander Hamilton studied, is joining with the AHA Society to host a full day of programming about Alexander Hamilton and his Elizabeth friends. Don’t miss this fantastic festival packed with unique programs.

Adjy (TN); Vasudeva; Toy Cars; Fire is Motion; prim. APMF is a peaceful space. $8 at the door. Music starts at 7:30. Alcohol and drugs are NOT allowed inside the venue.

Burden In My Hand: Tribute to Chris Cornell

$ 10.00 – $15.00 / Age 18 And Up. Come to the House on July 7th for a night to celebrate the life of Chris Cornell. Burden In My Hand: Tribute to Chris Cornell will featuring members of No More Pain, Mind Riot and plenty of Asbury Park talented musicians playing songs from Soundgarden, Audioslave and more! Doors open at 7PM. 18+.

Happy to be playing Maxwells in celebration of my new album! I’ll be singin’ all of the new tunes with my two brothers and pal John Tozzi. Doors open at 8.   Set Times: Adam Melchor – 9pm; Rob – 10pm; Yankee Longstraw – 11pm

Pin It
Previous post:
Picture of the Week – Jenna Murphy of prim Next Post:
An Historic Walk Through Newark’s Mount Pleasant Cemetery