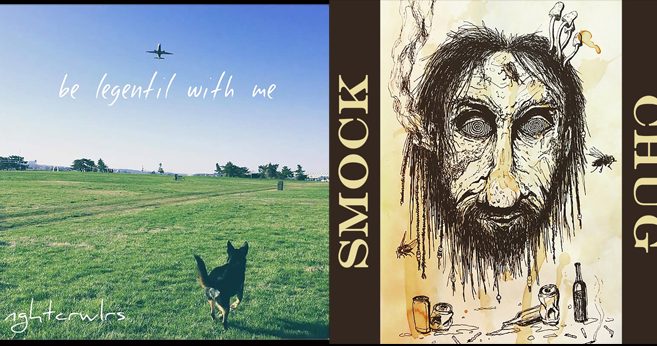 YDKJ is thrilled to premiere not one, but two new singles a day early courtesy of our friends at indie label Sniffling Indie Kids! Both songs officially come out Friday September 1st but since when do we follow the rules?

First up is one of our favorite New Jersey bands, the vowel-less quartet know as NGHTCRWLRS. Recorded during the sessions of last year’s impressive album Raging Hot, “Be Legentil With Me” examines depression in a straightforward way that sounds fresh and vital. As someone who is familiar with the condition, the realistic picture that band paints hits many emotions. Despite the subject matter there is unmistakable hope in this song and shimmering guitar work. Named after fellow musician and friend Brian Legentil, the pun shines a little lightness on the effort. The touching song displays why NGHTCRWLRS are one of the most sincere bands on the scene.

Chug is the debut single from new band Smock and it is a fierce, in-your-face announcement. What starts as a methodical, driving beat soon gives way to a whirlwind of punk infused racing guitar that is absolute bliss. This is a band you’ll want to keep your eyes and ears on.  Hold on tight and enjoy the ride.

You can catch NGHTCRWLRS live at Stosh’s in Fair Lawn on Friday September 8th at an indie rock showcase cosponsored by us at You Don’t Know Jersey! They will be joined by Rob Jennings, Fairmont, The Brixton Riot, The Vaughns and Lowlight! Presented with Mint 400 Records and Sniffling Indie Kids.

Smock hits The Meatlocker in Montclair on Friday September 1st if you want to check out this amazing new band. They will appear with LKFFCT, Whiner, Kult of Mary and Loko Disparos.

Pin It
Previous post:
In and Out of Trouble: Reviewing ‘Dressed for the Occasion’ by Luke Elliot Next Post:
Where’s YDKJ This Week? – September 2nd – September 8th