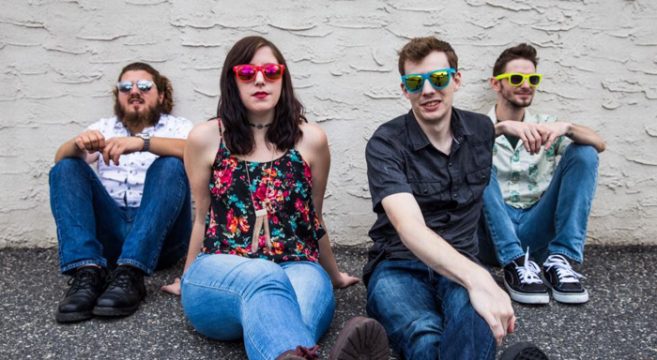 I Know How This Ends: Reviewing ‘Of Course’ by Fun While You Wait

New Brunswick is the hollowed-out center of our state; a hub of college students, burned-out bars, and an unfortunately gentrified downtown that was bought up and resold over a decade ago. Along the outskirts sits the Scarlet Pub, one of the city’s last above-ground music “venues.” I use that word very loosely as the Scarlet is a small living room-sized bar with no stage, poor lighting and an even poorer smell. But twice a week it comes alive with some of the state’s best local bands. This is where I met Devon Moore – one of the New Jersey music scene’s two or three best singers – and got exposed to the music of Fun While You Wait, the ukulele-led, groove-first outfit she’s been fronting for the past three years. 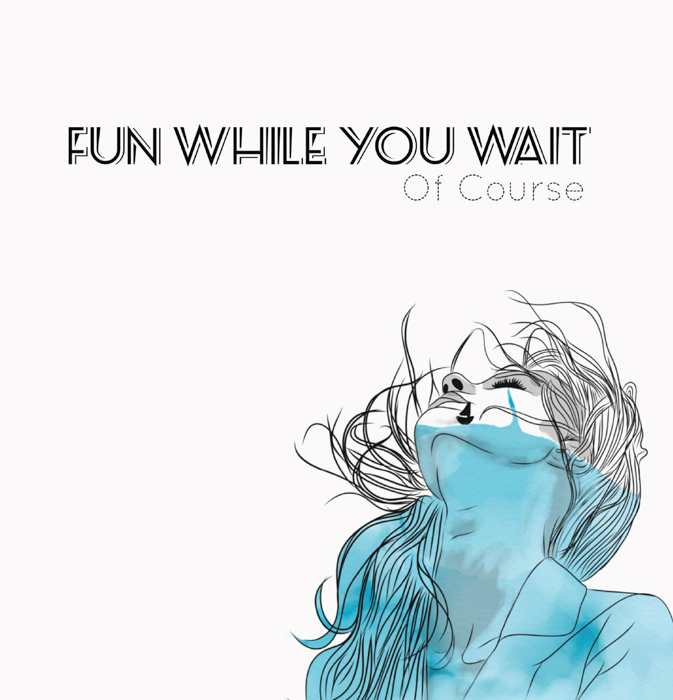 Gradually since its inception, the band has hit all the growth points you’d expect from a group of up-and-comers: An endearing (if rough-around-the-edges) demo in 2015, a promising full-length (2016’s Continuity), and now Of Course, an exciting new EP that doesn’t so much reshape Fun While You Wait’s sound as it brings it all together, cleaning up past production flaws and setting them on a focused, clear-cut path: Moore & Co are clearly in it to win it!

Of Course opens with “Yes/No,” and an admission from Moore, “It ain’t love / But it’s the closest I’ve ever seen.” From there, the rest of the ensemble slowly whirs to life, first with the Phil Spector beat from drummer Keith Leming. By the time we hit the chorus, bassist Kevin Newcomb and cornet player Bruce Krywinski Jr are on board and we’re off to the races. Meanwhile, the production/mastering duo of Ryan Weil and Len Carmichael (holdovers from Continuity) lend the tune – and the record at large – a crystalline production that pushes Moore’s voice up front where it belongs, but never at any of the other members’ expense. 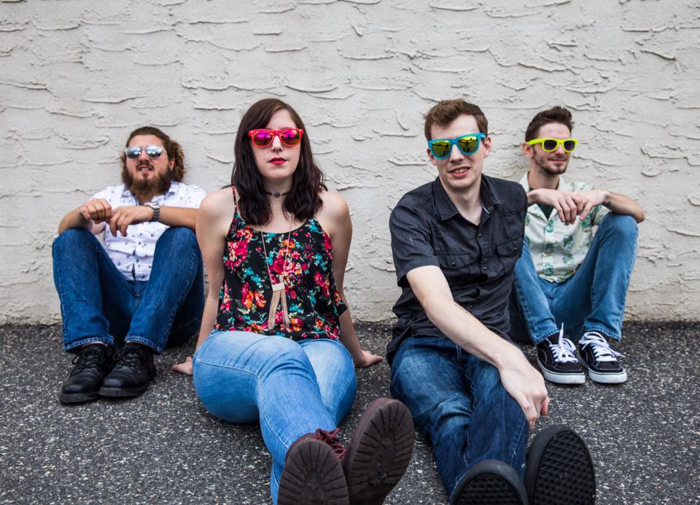 By the time we get to the second track, “Silver Linings,” (a highlight entry in last year’s SIMGE 24-Hour Songwriting Challenge) Fun While You Wait is already on cruise control, the breeziness of their music pushing the song along with what seems like almost no effort at all! Moore is hitting all the notes, she’s self-harmonizing against a singalong chorus, and Leming and Newcomb are driving the song’s sock-hop shuffle straight into the heavens. The music is so effervescent it’s easy to miss the oft-contradictory lyrics. Like an inverted indie rock “Ain’t No Mountain High Enough,” Moore highlights all the apocalyptic things that could stand between the song’s character and her love interest – the sun no longer shining, the sea sweeping them away – it’s fine so long as they still have one another.

“Ghost Ship,” the EP’s undisputed highlight, is something else entirely. Fun While You Wait welcomes violinist Alexander Iannone (formerly of Freehold’s We’re Ghosts Now) to add a lilting counterpoint to Krywinski’s melancholic inflections. And together, they add considerable weight to the group’s best ballad. Moore’s voice conveys a lived-in sadness. She’s not so much heartbroken as she is resigned to whatever reality has fostered the situation she finds herself in. And at 3:10, the band goes for it. With the hit of a triangle, Leming drops out, leaving Moore and Iannone as the song’s most prominent voices. The melody moves from ear-to-ear asking “How much longer will it take / Until there is nothing left” before insisting that “I feel you / But you’re not there / All around me / Everywhere.” It’s a welcome change in tone and pacing for Fun While You Wait and “Ghost Ship” succeeds in proving the band capable of maturing its sound without feeling forced to do so. 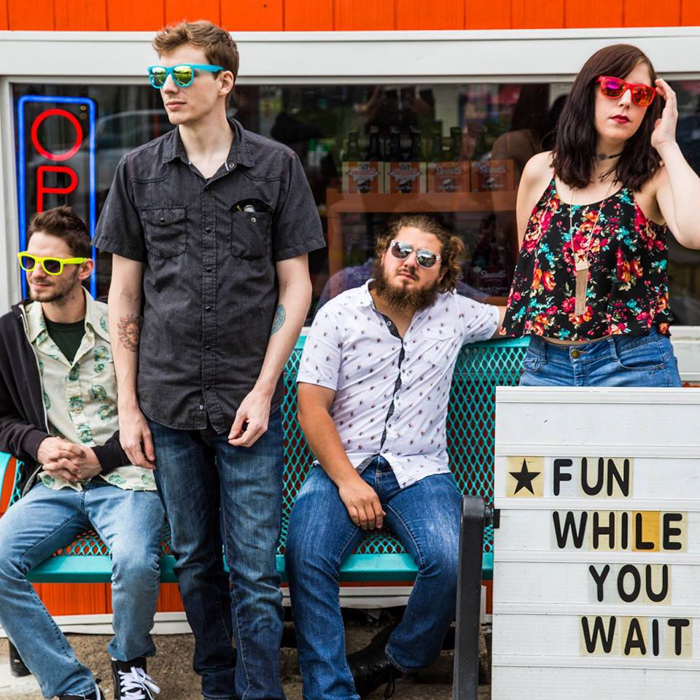 Long-time live staple “Wolves” kicks off the second half of the record with a bright melody buoyed by Krywinski playing his cornet more like a guitar. He adds timely accents on the two-and-four beats to create a reggae groove that plays counterpoint to Moore’s cautionary lyrics: “You can’t change him / But you’ll certainly try / He’ll bare his teeth at you / Then hang you out to dry.” The song ends with a Krywinski solo over a distorted freak-out that echoes fellow Jersey uke-punks Disposable.

Of Course closes with “Too Little Too Late” wherein Moore reveals, “I was just chasing memories” before circling back and admitting “I know that you tried.” Once again, Fun While You Wait puts a sunny shuffle over a set of contemplative Moore lyrics. It’s not as introspective as “Ghost Ship,” but it circles the wagons, calls all the players home for a clap-and-shout-along coda and thusly serves as a fine closer.

While the band has not strayed terribly far from the aesthetics of their demo EP or last year’s Continuity, Of Course has managed to move the needle in subtle, impactful ways. Moore’s continued growth as a lyricist is evident. As a singer and frontwoman, she stands almost peerless in her interpretive skill, delivery, attitude, and tone. Leming and Newcomb are becoming one of the most formidable rhythm sections around, and the permanent addition of Krywinski adds just the right amount of texture that you’re never left wondering what’s missing. It’s a testament to their evolution from a novel curiosity to one of the scene’s most important groups. And with that, Of Course has managed to sum up everything Fun While You Wait has done well to this point while also serving as a jumping off point for whatever the band plans to serve up next.

Of Course was released on Friday September 1st. Fun While You Wait will be holding a dual-release party on September 15th at the Asbury Park Yacht Club with We’re Ghosts Now whose own new EP Until Death came out on August 26th.

Fun While You Wait: On the Web | On Bandcamp | On Compact Disc

Pin It
Previous post:
Rob Jennings Releases Multi-Layered Debut Album – The World Was On My Side Next Post:
Where’s YDKJ This Week? – September 9th – September 15th