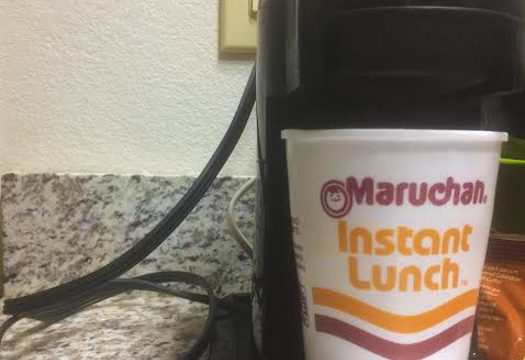 We have a guest writer today for an article on a New Jersey musician’s soup journey from Florida back north to the Garden State. How did this idea come about you ask? First, there is a new Facebook group called NJ Soup Group. Started by musician Max Rauch of bands LKFFCT and NGHTCRWLRS, the group has become a popular place for soup lovers to come together and share their love of soup. Next, John Cozzarelli, of the band John Cozz, posted that he would be traveling to Florida to help his girlfriend Sam Bolognese move to New Jersey. Hence a project was born. – Ed 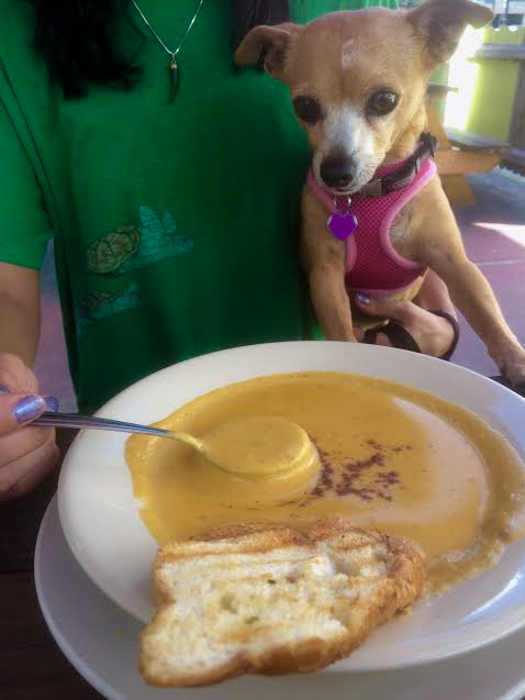 Our first stop on our journey was Bistro 1245 nestled in the midst of college town, Gainesville Florida. At this point in time we didn’t know what our soup-ventures would bring us. Luckily soup number one turned out to be a delicious bowl of Butternut Squash. It was creamy, full of flavor, and nutmeg sprinkled on top. The soup was accompanied by a garlic baguette that complimented it very well. Overall rating seven out of ten spoons. 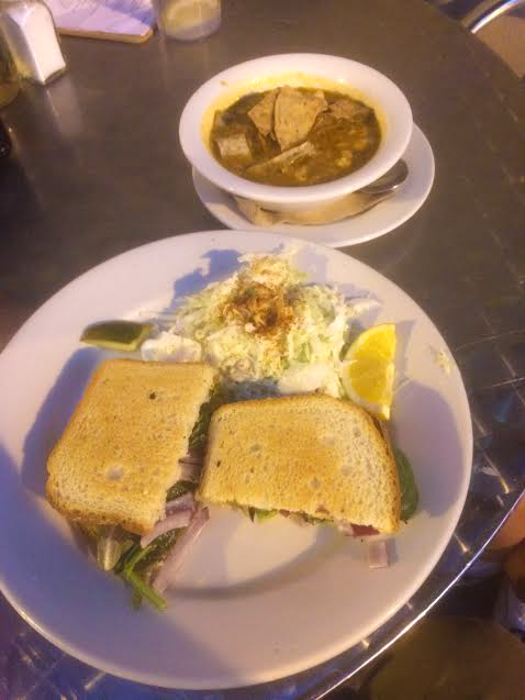 When we jokingly thought of this idea we didn’t realize the hardships we would face, especially in Savannah Georgia. Originally we planned on going to this restaurant that served a cream of cucumber soup that sounded really interesting. Unfortunately, when we pulled up to the restaurant it didn’t seem like the place we could bring Tink, the fearless dog that put up with our quest. After almost an hour of searching for a restaurant that had both soup and outdoor seating to accommodate Tink we unfortunately found the Kayak Kafe, half restaurant half fitness center. Here we experienced both terrible service and soup! If you ever stumble into Savannah Georgia and are craving a bowl of crushed up soggy tortilla chips with two drops of flavorless broth, I recommend the Kayak Kafe. Overall rating three out of ten spoons. 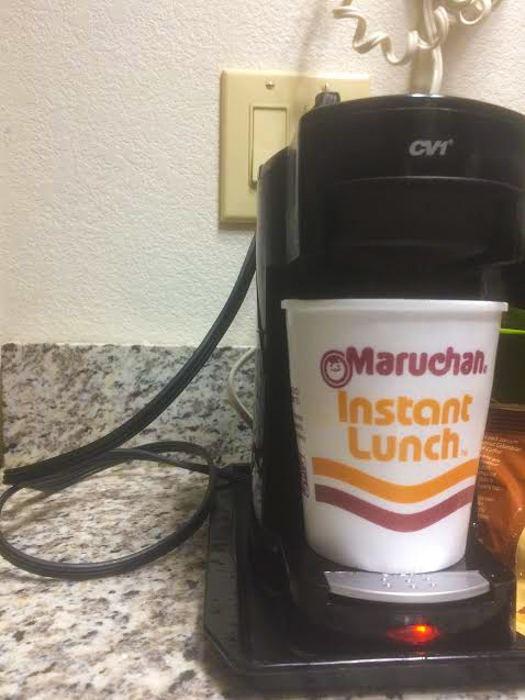 By the time we got to South Carolina it was too late to go to a restaurant, it wouldn’t have made a difference because according to google our only options for soup were subway. However being dedicated soupers we picked up some Maruchan Hot and Spicy Chicken Instant lunch, a timeless classic. Instant ramen is always there when you need it and at two in the morning it sure hit the spot. Overall rating six out of ten spoons. (Pro Tip: we used the coffee machine in the hotel room for hot water) 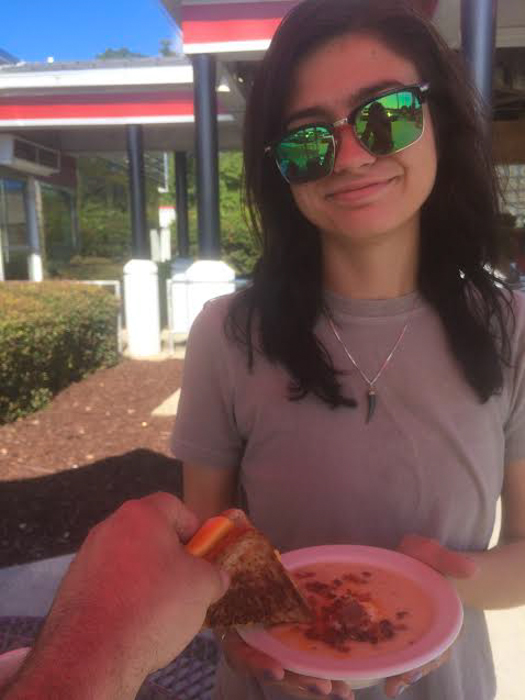 When you grow up in an area that is famous for its diners you tend to forget that in other states they are not up to the same standard. Thankfully the Highway Diner in Rocky Mount was reminiscent of the classic New Jersey Diner from it’s aesthetic to it’s great food. The Loaded Baked Potato soup was everything we could have wanted after our experience in Savannah. It was cheesy, savory, and loaded with bacon; being in the south we had to get an order of fried green tomatoes that paired well with this soup. Overall rating eight out of ten spoons. 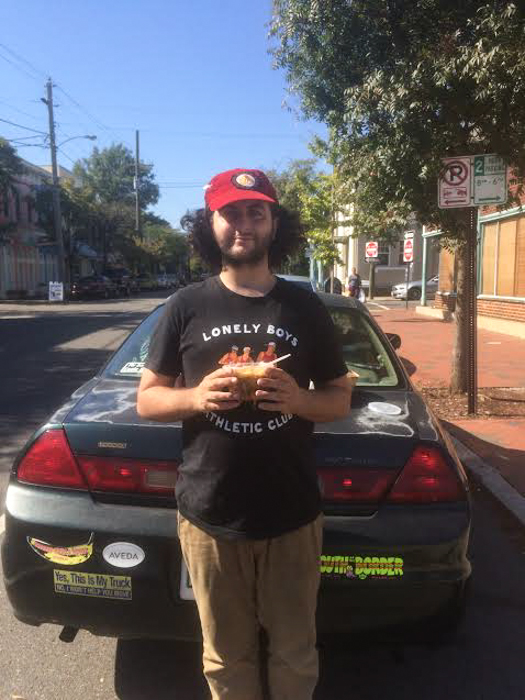 By this point of the trip we were fairly souped out, we had received a few recommendations, but for the most part they were all pho and that was too filling for our stomachs. You’d be surprised how upset people get when you sit down at a restaurant only to order soup. After a frustrating half hour of driving we settled on Chinese Dragon. It was fairly standard for a hot and sour but the one thing to note, which goes for Chinese restaurants in general, is that they always get the ratio perfect for their sweet teas. Overall rating five out of ten spoons. 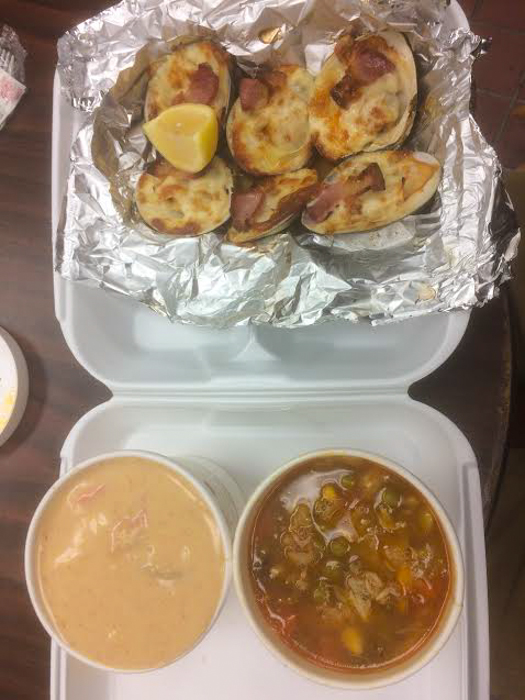 As a kid I used to go to this Boy Scout camp in Maryland, the best part was always stopping for some of Maryland’s Famous Blue Crabs from the Chesapeake Bay. I knew that when we got to Baltimore crab was on the menu. Mo’s was definitely the best soup of the trip. Sam got the Seafood Bisque while I got the Maryland Crab. Although mine was excellent it didn’t hold a candle to the Seafood Bisque. It was everything you could want out of bisque, thick, loaded with meat, and very filling. Luckily for me it was so filling that I got to finish Sam’s and I Literally tilted to cup back and gulped it all down. This soup was so delicious that even the burps I was having hours later tasted great! Overall rating ten out of ten spoons. (The casino clams photographed were just as excellent) 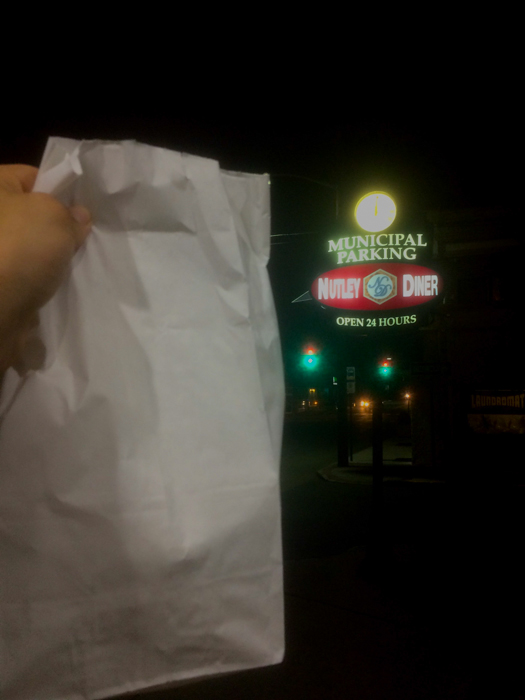 Early I mentioned how people from New Jersey take for granted the amount of diners they have at their disposal. I often take for granted the fact that one of my favorite diners is a five-minute walk from my house. The Nutley Diner is a twenty-four hour diner with a wide selection. They rotate their soups daily but the one constant is their French onion, and that’s because it’s delicious. We were so tired that we had to order it to go but nonetheless it was as good as a Jersey diner gets. It’s a shame the rest of the country is unfamiliar with the late night hidden gems we call our favorite diners but that just makes it a Jersey thing. Whenever I’m craving French onion soup or pretty much any meal at 3 a.m. it’s comforting to know the Nutley Diner is there for me. Overall rating eight out of ten spoons.

Pin It
Previous post:
Where’s YDKJ This Week? – October 21st thru October 27th Next Post:
Pizza with the Band – Accidental Seabirds at Vic’s in Bradley Beach