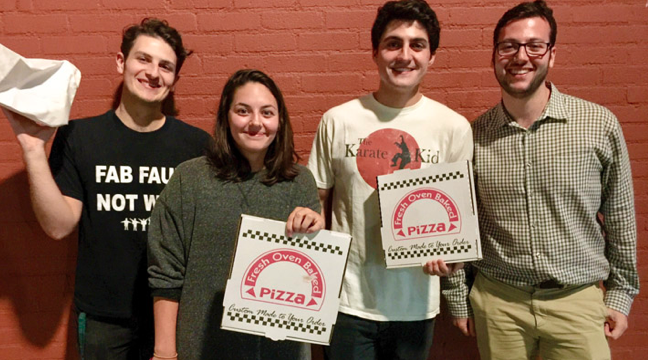 Pizza with the Band: The Vaughns at The Village Trattoria in Summit

Springfield’s The Vaughns have been surfing a steadily-rising wave since their inception in 2014. When they arrived, they were a scrappy group of high school friends not quite sure how best to do what they wanted. But their chops, undeniable musicality, and close-knit bond as friends was there right from the start. Three years later, The Vaughns are a well-oiled machine with a bright future and no ceiling. So much so that today they have announced they’ve signed to Sniffling Indie Kids Records. 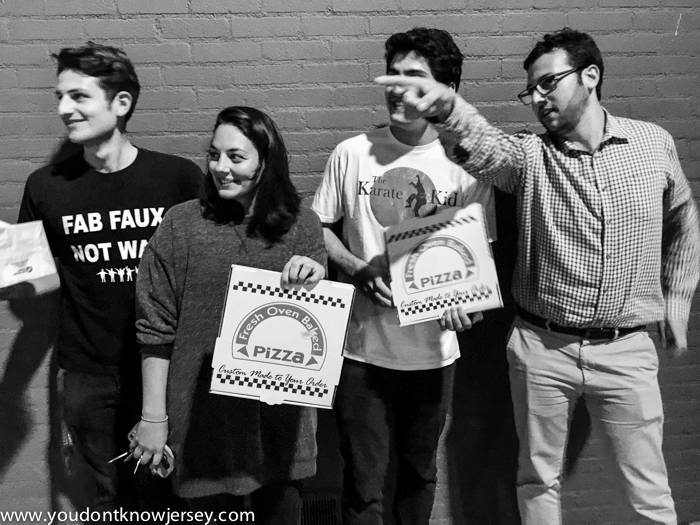 I met up with them at the Village Trattoria in Summit at bassist Tom Losito’s suggestion. It’s a place he visits off-and-on as it’s close to The Vaughn’s home base of Springfield, NJ. And with their pan-baked “grandma” style pies, it’s not hard to see why this place is in his rotation. We spoke casually during our two-hour conversation, opting not to roll tape and instead allowing things to flow as organically as possible. 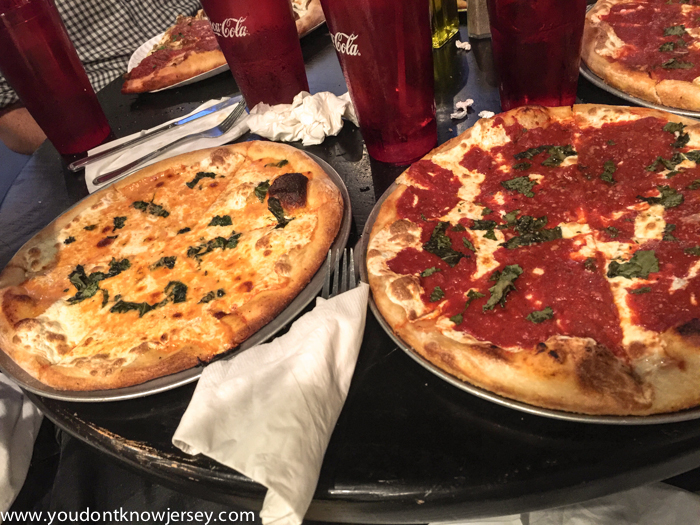 First on the band’s mind was the video for their single, “Santa Cruz,” debuted a few weeks ago. Shot at drummer Ryan Kenter’s house using only found items including a pinball machine, a classic muscle car, lots of rope lighting, and the film Casablanca. It all comes together as a fascinatingly dark watch that meshes well with the song’s ruminations on the propriety of womanhood. It also doesn’t hurt that it absolutely rocks! 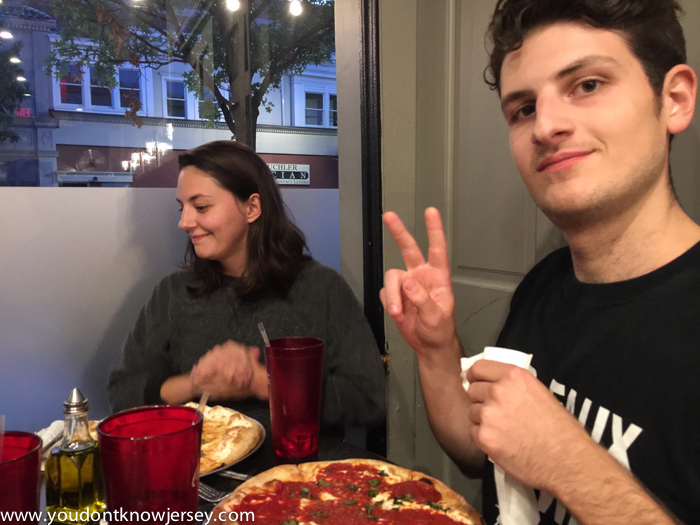 The pizza arrives – a couple slices for Kenter, personal vodka-style pies for guitarist Dave Cacciatore and vocalist Anna Lies, and old fashioned’s for Losito and I. I start the next conversation, “So give me a good post-show story, what have you got?” Kenter’s eyes light up as he turns to Cacciatore…

Ryan Kenter: So we’re driving home one night and we roll through White Castle…

RK: [smirking] How about you eat your pizza, Dave? So we’re driving home one night and we roll through White Castle for a Crave Case. We’re eating, it’s getting real late and we pull up to a stoplight and we see this car coming up in the lane next to ours. Before it gets to the light, we dare Dave to lean out the window and do something.

DC: So I grab some of the White Castle and lean out the window and just start stuffing these burgers into my face [makes a ‘nom nom nom’ gesture…if that’s even possible]. And we’re all laughing. Ryan’s driving and he’s losing it.

RK: Tell him what happens next…

DC: So we actually look into the car and there are four people – parents and children – in the car starting straight ahead. And they’re all holding lit candles in the car.

RK: So we start freaking the fuck out and thank God the light turns green and we just drive away.

DC: Except that they catch up to us a couple miles down the road at another stoplight. They pull up right next to us again. The candles are all still lit…

RK: Lit fucking candles in a car at, like, two in the morning, Brian.

DC: …and the whole family flips us off and drives away. 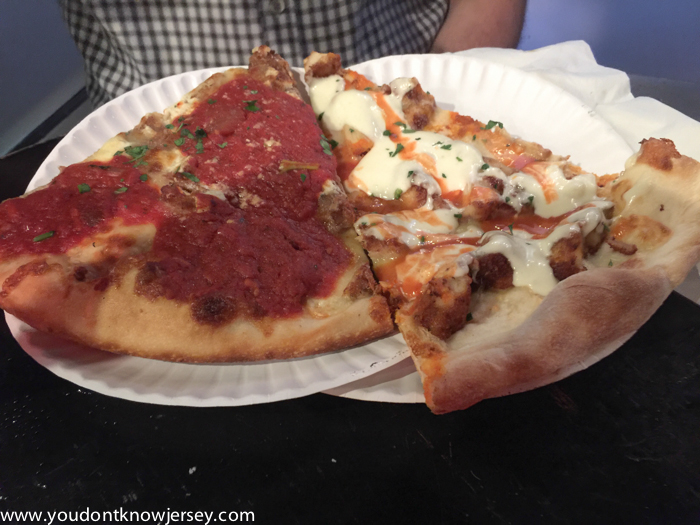 Next was the issue of distance. Springfield sits just west of Newark, close to nothing in particular. But The Vaughns started in the basements of New Brunswick, and have since gotten a decent foothold in the Asbury Park area, playing at regular local spots like The Saint and the Yacht Club. They also recently graduated up to the House of Independents, one of the town’s biggest, most prominent concert venues. I asked them if they felt like part of the community, knowing that Asbury Park in particular can be very insular and hard to break into. 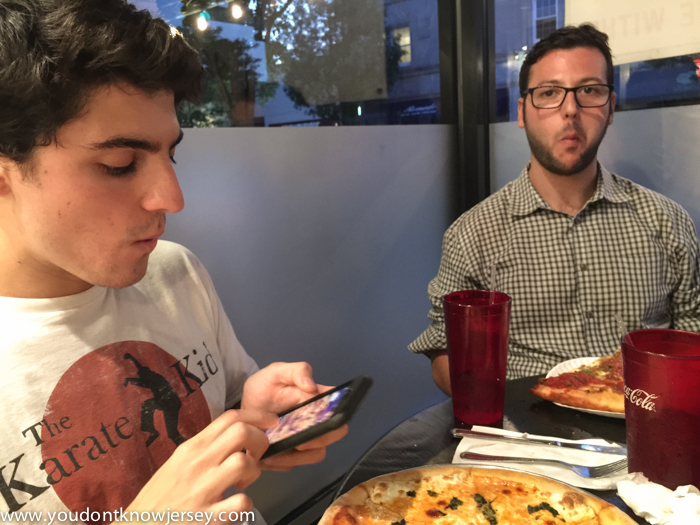 The band told me that they felt their “break in” moment came when they were asked to play an invite-only house show by Deal Casino, a group originally from northern New Jersey who has since relocated to the shore area. Deal Casino has had a similarly upward trajectory, crafting a highly listenable debut album and selling out The Stone Pony this past summer. The Vaughns look to them as both an inspiration and an aspiration, telling me how Deal Casino used to record all their shows and almost break them down like a sports team watches film after a game. Losito said, “Because of that, we started paying attention to details; tone, backing vocals, stage presence.”

And the attention to such detail has helped them exponentially with how they arrange and present their songs. Back in 2015, as they were supporting their Tomfoolery EP, The Vaughns played Maxwell’s in Hoboken. Toward the end of their set, they played “Willoughby,” the closing track from said EP. When Lies reached for – and absolutely nailed – the high ‘E’ note during the song’s breakdown, the room erupted. “Holy shit,” I thought. “These kids just arrived.” The following year, they would win the Speak Into my Good Eye 24 Hour Songwriting Challenge with their track, “Vamos.”

Next on the agenda was their new full-length album. Lies mentioned that The Vaughns will be working with Erik Romero (formerly of Dollys) at Lakehouse in Asbury Park and while they’re proud of their new alliance with Sniffling Indie Kids, don’t expect a release date just yet, “We don’t feel any pressure to put the record out soon.” Pointing out that while her band has a pair of solid EP’s currently available, their first full-length album statement shouldn’t be rushed, “We’re fine with taking our time and making it as good as we can. For now, we’ve got the video and we’re talking about a vinyl release of some kind, so there’ll be plenty to keep people occupied.”

My final ask was to find out where The Vaughns think they’re headed; what true goal really is. It’s a harder question to answer than one might seem. It takes a lot to reach within oneself and admit “the dream is the goal.” For The Vaughns, who have nothing but support from their families, friends, and loved ones, it came easily. Said Lies, “We want to do this! What’s wrong with saying you want to be a rock star?” The rest of the band echoed her enthusiasm while Kenter added just the slightest bit of measure. “At the very least,” he said, “I’d like to look back on my life and be able to point to even just a short time where all I did to make my living was play music.”

In the meantime, we paid our tab, wrapped our leftovers and headed into the night. The Vaughns have a busy couple months ahead of them. Shows will give way to more recording will give way to the release of what promises to be a magnificent new record. Just don’t ask them when it’s coming! 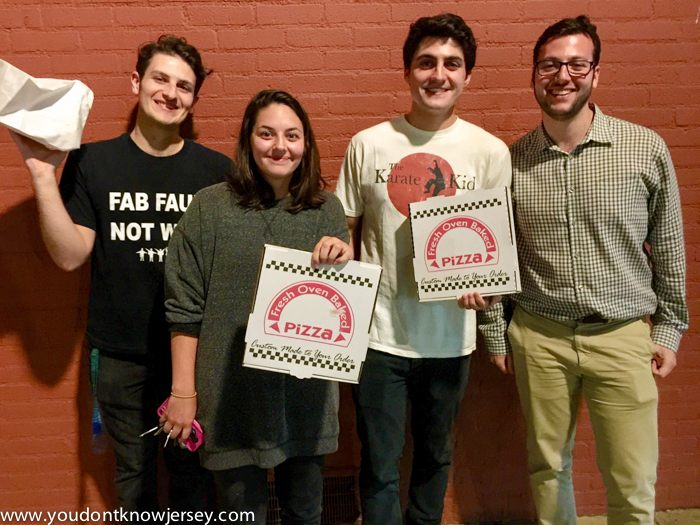