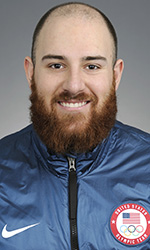 AJ Muss is a snowboarder who was born in New Brunswick and lived in Rumson until Fifth Grade when his family moved to Colorado to help him compete at a higher level. He will compete in the Giant Slalom and Parallel Giant Slalom.

AJ is a devoted family member, protective big brother and fearless competitor. At just 23 years old, he is the US 2017, 2016 & 2015 National Champion in both PGS and PSL, and the first and youngest snowboarder to claim 8 First Place podiums in the same NOR-AM season. He also recently secured for the fourth year in a row, a World Cup spot for TEAM USA for 2017/2018 season and has Qualified for the Olympics in Pyeong Chang, South Korea next month.

The 2016 North American Champion, AJ has won the most ‘North American Race to the Cup’ events ever in one season and is consistently ranked in the World’s Top 30 Alpine Snowboarders. He continues his climb by claiming a 7th place finish at the World Cup Olympic Test event in Korea this past February and is on the hunt for a medal in 2018.

AJ began racing the clock before he could even tell time. His need for speed started at the ripe age of just three years old. In his early years, he competed in every discipline including Halfpipe, Slopestyle, BoarderCross and Alpine Racing. Proving quickly that he was a snowboarding prodigy, AJ’s family moved to Colorado for the winter when he was in 5th grade so he could start competing at a higher level. A Four Time US Junior National Champion, AJ competed in four consecutive World Championships qualifying for every year he was eligible and then moved on the be the National Champion 4 years in a row in the Open Class Division qualifying him for the World Stage.

In early 2014, AJ suffered a life-threatening postoperative pulmonary edema after having routine shoulder surgery. Dr.’s didn’t think he’d recover and expected him to retire from the sport. But this devastating blow and setback clearly hasn’t slowed him down!