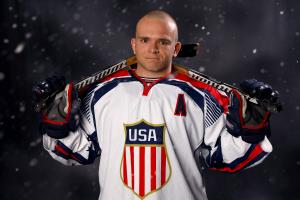 Josh Pauls was born in South Plainfield on January 3, 1993 and later lived in Green Brook.  He will be on the Sled Hockey (sometimes known as Sledge Hockey) team.  He is a Captain of the U.S. National Sled Hockey Team and he’s already helped the team win gold medals in Sochi and in Vancouver in 2014 and 2010, respectively.

In 2002, Pauls became a member of the New York Jr. Rangers Sled Hockey club team and competed with them from 2002 to 2011. In 2011 he joined the Disabled Athlete Sports Association’s (DASA) St. Louis Blues Sled Hockey Team. In 2012 and 2013 the Blue won a National Championship.

Once he was in Saint Louis, he graduated from Lindenwood University with a degree in sport management. He was a member of Phi Delta Theta Fraternity.

The bio on the Team USA website is so cleverly written that I can’t do any better so here it is in original form:

Call him “Spudsy” or call him a prodigy. Whatever the case, Pauls has been a staple on the blue line for the USA since 2008, and will lead the team as captain at the PyeongChang 2018 Paralympic Winter Games.

Not too many people can say at the age of 17 that they won a Paralympic gold medal at Vancouver 2010; but Pauls can. He was the youngest member on the team, and four years later, his hunger to win helped the USA to Paralympic gold at Sochi 2014.

Pauls racked up eight points for the USA across the 2017 World Championships, only to see his side lose out to fierce rivals Canada in the final.

Born without tibia bones in both legs, Pauls had both amputated at just 10 months old. Just barely breaking into high school, Pauls was named a member of the USA’s hockey team and has flourished ever since.

At the 2013 IPC Ice Sledge Hockey World Championships A-Pool, the US lost out again to Canada, but for Pauls personally the tournament was a success. He scored four goals and added two assists in four games.

In the 2014-15 season, Pauls was named Best Defenceman of the World Championships after holding off champions Canada to carry the US to a 3-0 victory.

Pauls is also one of a kind. A very superstitious athlete, he can often be seen looking towards a Mr. Potatohead figure before each game. If the US are victorious, a lot of Pauls rituals, such as wearing the same undershirt and throwing a tennis ball with teammate Greg Shaw, stay the same.