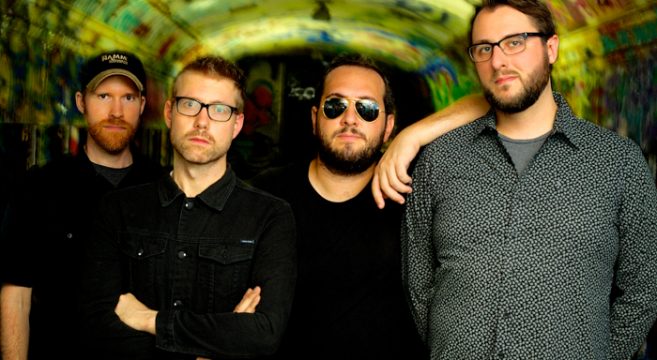 “The waiting is the hardest part.” – Tom Petty

I had heard bits and pieces of songs in the past few years from The Paper Jets that sounded strong and assured that had not yet appeared on record. I saw the band play the yet to be released record in full, front to back, at the Wonder Bar in Asbury Park many moons ago. All of this led to me questioning (a.k.a. pestering) guitarist/vocalist Brian Erickson “When the hell are you gonna release this stuff?” every time I saw him. Fortunately for music lovers everywhere the wait is over. This Friday December 7th the band finally releases the long awaited Everyday Forever. The wait was definitely worth it. Leave it to those dramatic Paper Jets to release one of the year’s best records in December. 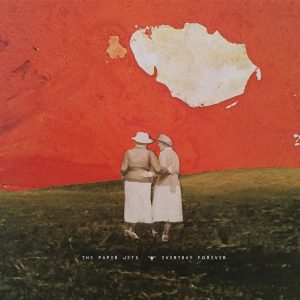 Opener “C.C. It’s Not Me” gets the blood moving right away with an upbeat, infectious energy that had me both air guitaring and drumming around the house. It is a classic opener, sweeping and anthemic. It is a statement that if you thought the long wait for the album was due to the band being unsure of the strength of the songs, you are sadly mistaken. I hear a little late-era Smiths in “Wonderful Love” with Brian carrying off the role of crooner quite well. “Say I Can” is just pure fun.  A live staple for years if this song does not make you want to take to the dance floor you may want to check for a pulse. The drumming of Frank Lettieri Jr. is a highlight here.

It is a testament to just how solid Everyday Forever is that I mentioned the first three songs. I do not usually like reviews that are a laundry list of the songs in order but each one is truly so very strong that I broke my own rule. There is no filler here. 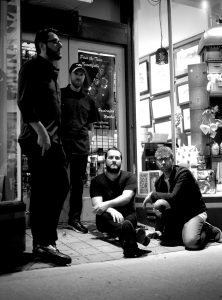 Other particularly strong tracks include the Who/Clash mashup that is “Go On, Go On” which premiered right here at You Don’t Know Jersey. One of two songs Erickson co-wrote with Jeff Fiedler, the song casts a side eye glance at the nature of relationships. “Charlie It Can’t Be Done” plays with tempo and allows Erickson to display his vocal range in a song based on a bit by the late comedian Bill Hicks about the codependent relationship between Elvis Presley and his friend stage manager Charlie Hodge.

Along with Erickson and Lettieri Jr., lead guitarist Mike Virok and bassist Scott Austin Miller have created one hell of an impressive album. This may be the last we hear from The Paper Jets for a while and that would be a sad thing. However if that is to be, Everyday Forever is the sound of a band at their peak, dropping the mic, and challenging other musicians to try to do better. That will not be an easy task.

Join the band for their album release show at the Asbury Lanes Friday December 7th. Joining them will be Bobby Mahoney and the Seventh Son, We’re Ghosts Now, Tara Dente & The Blind Pilots, and Dave Mooney. You can get your tickets right here.

Brian and Frank answered a few questions for us.

Congrats on the album! Why did it take so long to release Everyday Forever?

BRIAN: After a pretty rough 2015 summer tour, we decided to stop performing altogether. The assignment was to do an album’s-worth of demos by Thanksgiving which we were able to do. We added our current bassist Scott Miller a couple months later. So teaching him the new stuff took a bit of doing. Arranging the songs took a lot of effort, as well. We didn’t want to make it sound like our last record. Frank and Virok made solo records in that time, as well. And I did some touring and recording with Jesse Elliot. This is what happens when people in their 30s with lots going on make records; it just takes a while!

FRANK: Thank you…yeah it was never intended to take as long as it did.  It definitely felt like an uphill battle at times.  We had parted ways with our original bass player in early 2016 so that took some time to recover from.  However by the time 2016 came to a close we actually had most of the instruments and some vocals tracked.  The whole time we were still playing shows and working full time so finding time to record during the week was elusive at times.  We wanted this record to be special, and that couldn’t be forced, so we rode the wave until it was done.

How long did it actually take to write the album?

BRIAN: We actually just posted a video of the live debut of “C.C. It’s Not Me” from 2014. “Kiss Arcana” was debuted at a basement show a couple months later, I think. Around that same time, “Charlie It Can’t Be Done” was written. “Say I Can” didn’t happen until the following summer. So I guess a year-and-a-half, give-or-take. It doesn’t feel that long. The final song written for the project, “My Gemini Heart,” came along maybe a week before we finished our demoing so we cut that one a little close.

FRANK: Some of these songs we have been playing for nearly four years.  I would say the majority were written over a two year span. 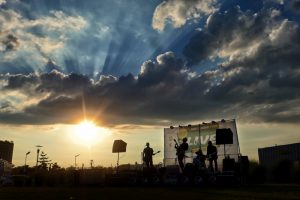 How did you end up with the esteemed Rodney Mills mastering the album?

BRIAN: That’s all Frank! Frank isn’t afraid to go up to people or reach out to them. He chatted up Matt Pinfield after one of our shows. He contacted the guy who engineered August and Everything After. He took mixing classes with Sylvia Massey who used to work at Sound City Studios. He just reaches out. And people answer him!

FRANK: Like many music lovers I grew up reading liner notes from my favorite albums.  One of those records was “Yield” by Pearl Jam.  I looked up who mastered it and it was Rodney.  He is a super-cool person and shared many stories about his time working with Lynyrd Skynyrd along with other classic acts over the years.

The release show is at the new Asbury Lanes, a venue that has caused some division in the local music community. What is your take on the old Lanes versus the new debate?

BRIAN: I’d rather have a revamped new/old venue than a parking lot or high-rise condominiums. Lanes 2.0 seems to trust that when you work with the right artists, they’ll treat the responsibility of curating a big show with the appropriate respect. And I think because of that, both iterations of the Lanes aren’t actually that far apart. I hope they continue to act in the interest of the community and strike that necessary balance. And while they’re at it, they should invite CoolDad to curate a show there! That would go far in helping bridge the gap between old and new.

FRANK: The old Lanes holds a place in my heart because the TV show Scott Silvester (of Meeko Brando) and I produced was shot there only days prior to its closing. Jenn was extremely kind and welcoming to us. It was definitely sad to see a place that was so special to her and many others in the community change like it did. The old Lanes had such a distinct vibe, and character which made it one of a kind. From the shows, to the art, to its nostalgic atmosphere, it really can’t be replaced and to those who experienced it over the years, it will not be forgotten. This show will actually be my first time in the new Lanes.

Are you exited to play live again with founding member, guitarist/songwriter Bill Lambusta?

BRIAN: Our very first show involved Bill. So it’s appropriate that this one involves him, as well. There would be no Paper Jets without Bill; especially in the beginning. Our first record, Face Forward, is deeply indebted to his production as well as his sense of leadership and organization. He did a great job with it and with being a bandmate in general. We truly couldn’t be happier to have him back in the fold for this show!

FRANK: It feels good to all be in a room again playing songs we played nearly a decade prior.  He played an integral part in the early years of the band so to be playing this show with Bill on stage again is quite fitting.

You have hinted that this will be the last show for quite a long time. Is this the end of The Paper Jets?

BRIAN: Some bands get out there and play shows relentlessly. We’re not that right now. And we may have never been that to begin with. So this is us reconciling with that reality. But to be radically honest, who is just dying to see us tour and release records? My point is when that outside validation is absent and the drive needs to always come from within the ranks, wringing that energy from four pragmatic introverts isn’t always enough. Especially considering we’ve been a band since 2008! There’s also a normality in just wanting to live; not concerning yourself with recording deadlines or the draw of your live show. Letting people in that don’t care as much as you do is an avoidable pitfall. Sometimes you’ve gotta just say “no thanks,” and shut the lights out for a bit.

FRANK: I think we are at a point where we need some time off.  We all have other projects we would like to work on so it feels like the right time to do that.  I don’t believe this is the end of The Paper Jets.  This hiatus will hopefully allow us to come back at some point in the future with new songs and sounds.

You often get compared to band like the Beach Boys, Beatles and Big Star. Do you think comparisons like this help or hurt a band?

BRIAN: It’d be nice if our bank accounts got compared to The Beatles or The Beach Boys. Get in on some of that sweet “Hey Jude” or “God Only Knows” money! It’s nice to be compared, but what truly helps is being proud enough to want to share your art with others. What hurts is being demure and calling it ‘modesty.’ You can be proud without being boastful. If you’re not willing to share your work first, no one else will do it for you.

FRANK: Anytime you are compared to bands like those it can only help.  I mean, they produced some of the greatest music of all-time so to be compared to that is flattering.

BRIAN: Brian’s hard to work with.

FRANK: We are all strange friends.